So wrote Emily Dickinson in one of her most famous poems.  Our reclusive spinster would probably be askance to know of A Quiet Passion, which dramatizes her life.  If we go by the poem, she would highly object to being a "Somebody".  A Quiet Passion certainly lives up to the title: the characters are very passionate, but also very quiet.  I think it is a film that will divide people: some will be impressed by the performances and the story of our perhaps bonkers poetess, others will find the hushed tones, slow pacing and deliberately mannered acting impossible to bear.

From my perspective, I found A Quiet Passion to not be your run-of-the-mill biopic and on the whole much better than perhaps it is.

After a brief time at Mt. Holyoke College, where our Emily (Emma Bell) openly states she will not be pushed to be 'saved', her family: Father (Keith Carradine), brother Austin (Benjamin Wainwright) and sister Vinnie (Rose Williams) comes to bring her back to Amherst, Massachusetts, after a brief visit to Aunt Elizabeth (Annette Badlands).

Once back within the confines of the Dickinson home, we see that they are a loving, highly intellectual but eccentric family.  Emily (Cynthia Nixon) continues to be a nonconformist in matters of faith: she does not deny God, but insists that He is not confined within a church.  She gains permission from Father to write he poems in the wee hours and even gets him to use his influence with the local paper to see about getting a few published.

Most of our poetess' time is spent in witty repartee with her friend Vrylling Buffum (Catherine Bailey), who is as opinionated and caustic as Emily.  Time goes on: Emily continues to live out her questioning of God, supporting women's rights and abolition and not being afraid of speaking her mind, at least within the Dickinson home.  Austin (Duncan Duff) marries and has a child, while Vinnie (Jennifer Ehle) continues cheerfully on with her single and chaste life.

If Emily had ventured out more, she would probably have been as outspoken in public as she was in private.  As it stands though, she doesn't.  Whether she is content to remain in seclusion or has slipped into a questionable mental state one doesn't know, but she does start wearing white after Father's death, sometimes not coming down the stairs and not speaking directly to people downstairs. 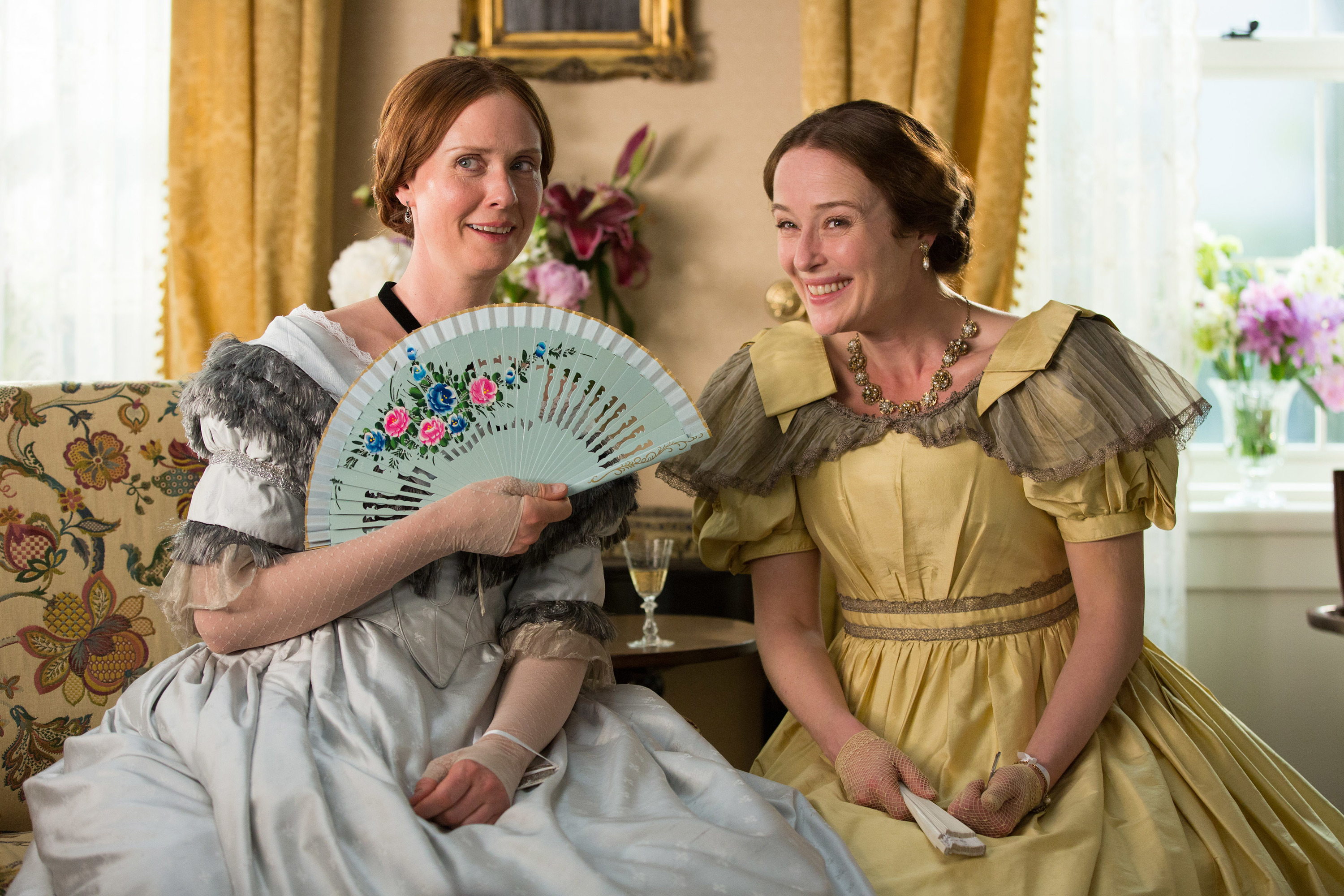 I think many, many people will find A Quiet Passion more an endurance test than an insightful character study.  I confess to finding it at times hard to stay awake while watching it, though in fairness to the film I was watching A Quiet Passion past my regular sleep time and had been up since 5:30 a.m.  The pacing is at times extremely slow (though not without its rewards: the transition from the younger to the older Dickinsons was made in a particularly ingenious way).

However, there are scenes that seem to drift and/or go nowhere.  Sometimes that stillness makes sense.  When Emily and Vinnie host Reverend Wadsworth (Eric Loren), the object of much affection by both Dickinson sisters...along with Mrs. Wadsworth (Simone Milsdochter), the unease and discomfort of this tea party is natural.  This is enhanced by Mrs. Wadsworth's insistence on not drinking tea or even lemonade, telling them that water will be the approved drink, with the suggestion that whatever the Reverend's wants, his greatest allowed indulgence is hot water.

Sometimes though the stillness is enough to drive a viewer into slumber.  An early scene where the Dickinsons along with Aunt Elizabeth are attending the opera feels so awfully long and tedious (something that at times could describe opera itself).

The performances in A Quiet Passion will also divide viewers.  I found them with one exception to be very stilted and mannered.  Whenever Brylin and Emily are matching wits, I saw that the words felt forced, as if they were not speaking in character but almost in verse. 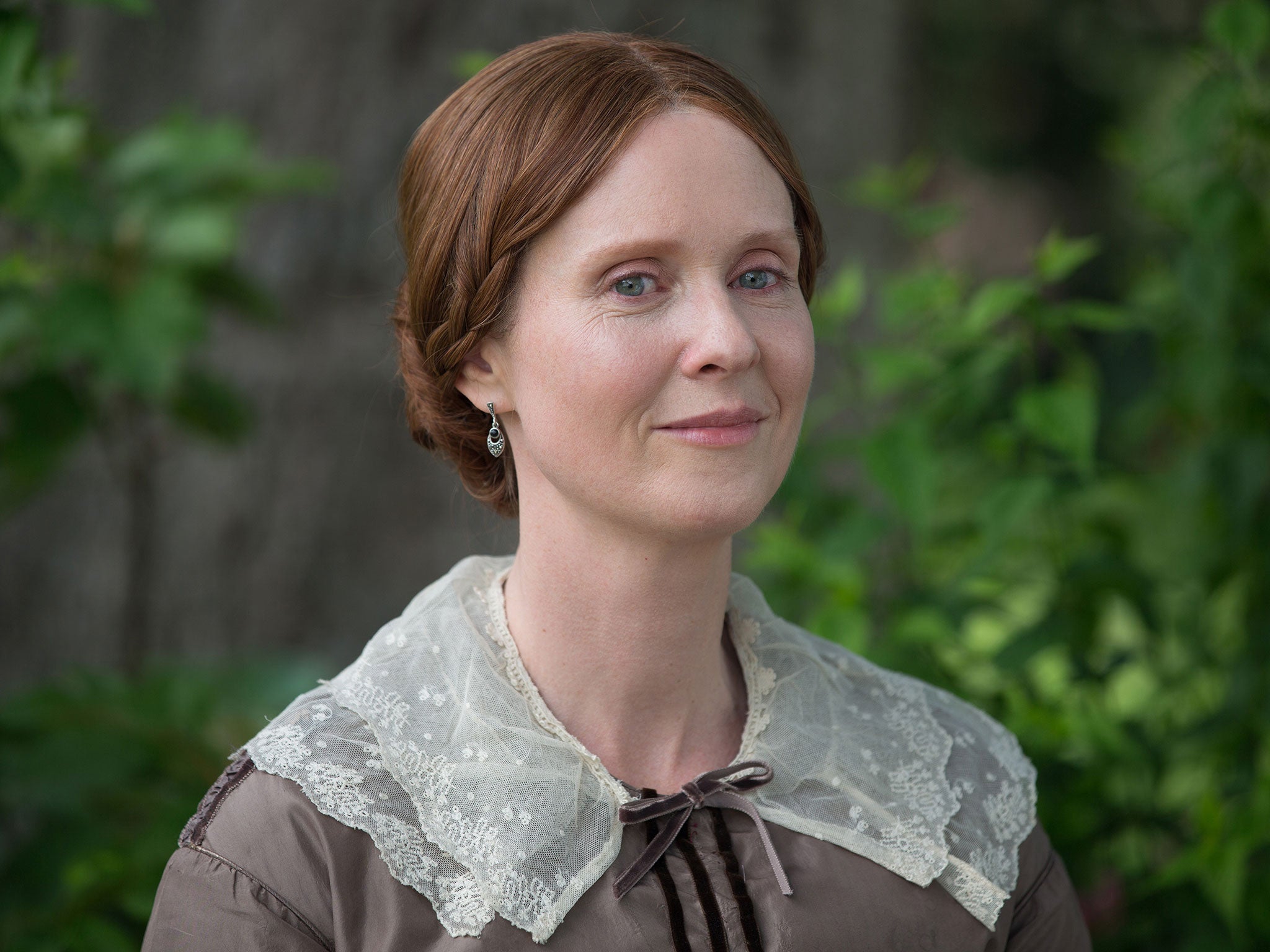 In other movies I would have found this off-putting.  Here, however, I could never shake the sense that it was all deliberate, that it was the intent of writer/director Terence Davies that everyone should speak as if they were at a poetry recital.  Perhaps this is why I was forgiving of the mannered delivery, perhaps more than I should have been.

I mentioned one exception, and that is Cynthia Nixon as Emily Dickinson herself, our Belle of Amherst.  Nixon makes Emily not into the great American poetess 'who went crazy as a loon' to quote Lisa Simpson.  Instead, Nixon's Emily is witty, sharp, sharp-tongued, even funny.  When the prissy Mrs. Wadsworth comments disdainfully on the Bronte sisters that Emily so loves, asking why they can't be more wholesome, Emily replies, 'if they wanted to be wholesome, they'd take up crochet'.

Nixon's delivery is one of the best I've seen: in equal parts innocent and knowing, casually dismissive of Mrs. Wadsworth without being overt about it.  She could be quite sharp, as when she discovers Austin in a compromising position with another man's wife.  Shocked at their behavior, Emily looks them both and says with strength and deeply repressed anger in her voice, "Mrs. Loomis, the exit is to your left".

I think 'repressed anger' is a good way to describe Nixon's portrayal of our wordsmith, because she too is kept to not really speaking loudly in A Quiet Passion.  Nixon is as much part of Davies' more hushed direction as any of the other actors, but you can see and hear the sharpness of her words when angry, the lightness of her manner when amused, even the fear when she seeks out approval.

Nixon's Emily Dickinson is bright, aware of the limitations due to her gender but not limited enough to 'know her place'.  She is not perfect: at one point Father tells her to apologize for snapping at three people who work for the Dickinson family, him telling her 'they are not servants, they are employees'. However, she is also longing for an outlet to her ideas, for a chance to transcend her world, to question both the limits of her time and whatever limits 'God' placed upon her.

Emily is asked about Hell, and what she thinks of it.  Her response is very Jane Eyre-like: Avoid it if I can, endure it if I must.  The conviction Nixon gives this bit of witty wisdom is in turns defiant and brilliant.

A second standout is Ehle as Vinnie, who was the Sun to Nixon's moon, the brightness to Emily's gloom.  The love Vinnie had for her sister comes through strongly and beautifully.

I can see how many people would find A Quiet Passion a chore as difficult as attending a poetry reading.  It is slow, the acting appears at times mannered to almost comedic levels, and it is slow. It does not give one great insight into Dickinson as a poetess or her writing.  However, with some surprisingly beautiful moments (a metaphorical 'gentleman caller' that to my mind brought back her poem Because I Could Not Stop for Death) and a quiet and passionate performance by Cynthia Nixon, it is just enough, just enough to get a passing.

Emily Dickinson will always be obscure to us.  A Quiet Passion does not inspire but it does slightly illuminate.