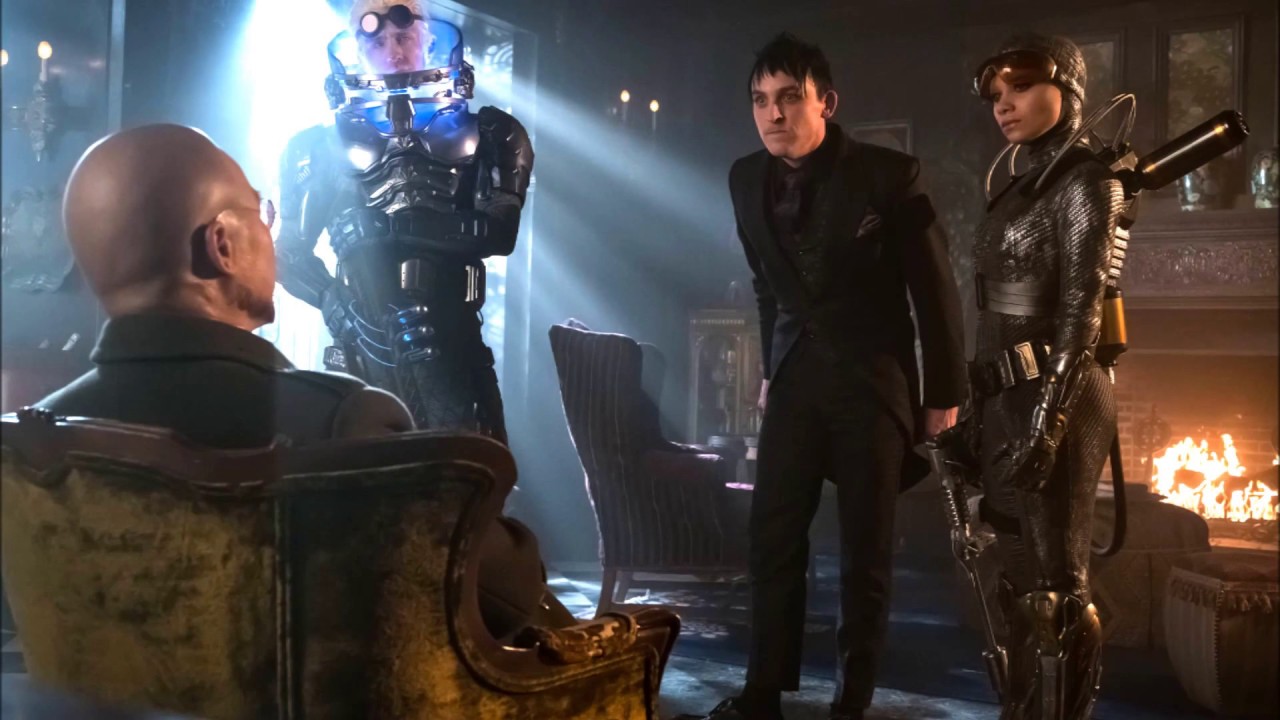 It's a bit difficult to give a review to Destiny Calling given that it was part of a two-part season finale for Gotham Season Three.  However, I've opted to do so since technically, they were two episodes put together as one.  Destiny Calling has the city plunging into another crisis, with some repetitive motifs from previous moments, some unexpected and expected twists, and more strong performances.

Gotham City is in chaos thanks to the release of the Tetch virus, which unleashes a person's darkest side.  Acting Captain Harvey Bullock (Donal Logue) is doing his best to bring order to the city, while his partner/best friend Detective Jim Gordon (Ben McKenzie) is attempting to hold on to his own sanity since he is infected as well.

In order to find an antidote, they have to first find mad scientist Hugo Strange (B.D. Wong), who is determined to flee the city.  Unfortunately for him, it's none other than Fish Mooney (Jada Pinkett Smith ) who gets to him first.  She wants Strange to make her the army she wants to take over Gotham.  Gordon and Bullock are powerless to stop Strange's taking.  For help, Mooney turns to an unlikely ally: Oswald Cobblepot aka The Penguin (Robin Lord Taylor).  Pengy is not thrilled to see Strange again, still bitter about all those 'experiments' Strange put him through.  Also not thrilled to see Strange again is Victor Fries aka Mr. Freeze (Nathan Darrow) and Bridgit Pike aka Firefly (Camila Perez), and now the three of them decide it is time to enact revenge.

Strange is a most popular fellow, for he is also wanted by the Unholy Alliance of Barbara Kean (Erin Richards) and Edward Nygma aka The Riddler (Cory Michael Smith).  They want strange to make them an antidote with which to make massive demands on Gotham, and thus take over the city.  Well, that Bonkers Babs' idea.  Nygma just wants to kill Penguin...again.  Babs' two partners/henchmen, Butch Gilzean (Drew Powell) and Tabitha Galavan (Jessica Lucas) are wary of all this, and are wavering on double-crossing them.


Bullock and Gordon are close to finding Strange, who has developed the antidote.  However, ninja assassins and Gordon's uncontrolled rage gets the better of all of them, and Gordon kills Fish, who in turn drops the antidote and destroys it.  Fish, another woman who ends up stabbed with Pengy by her side, urges him to destroy Gotham. There's only one thing for it: to make the antidote now, they need Jarvis Tetch aka The Mad Hatter (Benedict Samuel) to make more antidote.

However, Riddler/Barbara get to Tetch first.

In all this insanity you have the continuing troubles of Bruce Wayne (David Mazouz) still under the Shaman's spell.  At last, he manages to escape the watchful eye of Alfred (Sean Pertwee) and go find the one he seeks, one Ra's al Ghoul (Alexander Siddig).  He asks Bruce to stab Alfred, which despite his conflict, he does.

I'd say that's a lot to pack into one hour's worth of television, and it's a good thing Destiny Calling didn't feel overwhelming.

One thing that Destiny Calling and Gotham in general has always had has been strong acting, even when it looks like total camp.  In this category, I'd put Wong and Jada Pinkett Smith in.  Not that Hugo Strange and Fish Mooney weren't already slightly camp to begin with: his cold, almost emotional-less manner and her vamping all over the place is simply part of who they are.  That's part of their charm.

However, Wong did get a good moment when for once, he has to face the terror he had inflicted on others, and there is something wonderful about seeing him get a comeuppance.  As for JPS, she never lost her touch as the always outlandish Fish Mooney, but it looks like it's curtains for her.  Now, given that she has already come back from the dead, as have Penguin, Jerome Valeska aka The Joker, and a few others, what is to prevent her from strutting her stuff one last time?

Morena Baccarin as the Tetch-infected Leslie Thompkins, bless her heart, manages to out-camp Jada Pinkett Smith, and part of me thinks she had a great deal of fun being more outlandish than Thompkins usually is.

Mazouz continues to be so strong and wonderful as Bruce, undergoing his own 'dark night of the soul', and he is matched by Pertwee's Alfred, particularly in their scenes in the interrogation room and their final meeting.  The sadness, the pathos of their relationship continues to build into something of beauty.

It's hard to find when Taylor was bad, and here, he wasn't.  Between his scheming for revenge against Strange to his comforting of Mooney (and it is strange to see him cradling another woman stabbed to death), Taylor continues to showcase his impressive range.

Destiny Calling leads to our final episode, which I'm sure will be as deranged as is Gotham's want.

Next Episode: Dirtyheavysoul
Posted by Rick at 1:06 PM