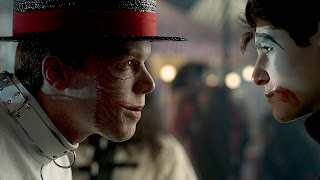 What would happen if The Joker and Batman first faced off when they were both teens? How would a Penguin/Riddler tiff go off?  If you've ever wondered about that and so much more, wonder no more.  The Gentle Art of Making Enemies is a thrill ride of a Gotham episode, delving these two separate stories into one epic night of chaos and mayhem in our beleaguered city.  It has some of the best performances I've seen this season and an exciting plot.

It also has that traditional Gotham gruesomeness but perhaps I should get used to this by now.

Gotham City has been plunged into darkness, and it has unleashed something insane among many in the populace.  Perhaps they thought they were living out The Purge, since people are committing crimes all over the place.  The Cult of Jerome has appeared to have taken over, while The Court of Owls watches over all this, biding its time but ready to step in in case the entire city is on the verge of total collapse.

The Court of Owls vs. The Cult.  Who will win?

As things descend into madness, it's more than the GCPD can handle, leaving Detective Jim Gordon (Ben McKenzie) and acting Captain Harvey Bullock (Donal Logue) from thinking about anything other than capturing Jerome Valeska (Cameron Monaghan).  He, however, has other fish to fry.

The big fish is Bruce Wayne (David Mazouz), whom Jerome wants to kill.  Jerome and his minions make it into Wayne Manor (destroying the crystal owl from the Court in the process), but Bruce has a few tricks up his sleeve.  For one, he manages to get to Jerome's ego, suggesting that by killing Bruce at Wayne Manor, it would be so unlike our showman.  Jerome can see through this, but he admits Brucie has a point.  He is then taken to the fairgrounds, where Bruce sees the depravity of The Cult. Jerome has a big finish waiting for Wayne, but thanks to the police and Alfred (Sean Pertwee), who has managed to survive this night of terror, they get there in time.

Jerome chases Bruce into the funhouse, where these two great rivals will fight it out. If one wonders where Mayor Oswald Cobblepot (Robin Lord Taylor) is in the middle of this major crisis, he's tied up.  Literally.  The plan to deceive Oswald has come to fruition, with him discovering over time that his thwarted love, Edward Nygma (Cory Michael Smith) knows all about his involvement with Isabella's murder.  Now, Nygma has come up with an elaborate plan to kill Pengy off.

As is Pengy's nature, he manages to survive yet again, only to find himself in more chaos.  Making it back to his mansion, he is attacked by Tabitha (Jessica Lucas) and Butch with her whip around his throat.  They want to know where Nygma is, something Penguin would have no knowledge of.  Despite his great danger, Penguin is defiant to the end.  It isn't until Barbara Kean (Erin Richards) puts the squeeze on him that Penguin finally sees that he does love Nygma, for he cannot give him up to them.

Unfortunately for him, now he finally sees Bonkers Babs, Tabby, Butch, and Ed were all in on it together.  Penguin finds himself in familiar settings, begging for his life on the docks of Gotham harbor, mixing love and fury towards Edward.  Edward ends it by shooting Pengy and pushing him into the harbor.

Then again, he forgets that Penguins do well in water.

We leave however, with the return of 514A, the Bruce Wayne doppelganger the Court has ready for use, about to be used.

I think the strength of The Gentle Art of Making Enemies is that all the performances are just so incredibly good.   The first mention I'm going to make is that of David Mazouz, who has grown so much from Season One into being one of the best actors around.

Here, he had to convey both someone deeply afraid and yet courageous enough to face those fears. Mazouz's Wayne had to rely on himself to survive, and he also had to show us the rage within him.  Every scene he had with Monaghan, whether it was the shocked/scared Bruce or the strong/courageous Bruce, was pitch-perfect.  His revulsion at Jerome's acts, his forced restraint when he opts not to kill him, was all done so well. Moreover, he also had a brief moment when he was the doppelganger, and you can believe it is someone different.  Mazouz's voice and manner are different than that of when he plays Wayne, and it is a simply great performance.

He had an equally great partner in Monaghan, who made Jerome both highly evil and highly intelligent.  While perhaps it is impossible to fully escape the ghost of Heath Ledger's take on The Joker from The Dark Knight, I think Monaghan did the most to make the future Joker into his own.  I think that comes in part, ironically enough, from him being able to channel a little bit of Jack Nicholson's version from Batman.  In this episode, Monaghan brought about some of Nicholson's malicious glee.  He wasn't just like Ledger, all voice and vicious cruelty (though Jerome was certainly that).  Jerome was also wickedly amused and amusing, letting the exaggerated showmanship and flamboyant manner of The Joker come across.

It's as if Cameron Monaghan's take on the character blended the best of Nicholson and Ledger while also making the character his own.  I think Monaghan was if not equaled both these versions, at least shown that he is able to rank alongside them.

We then move on to the RLT and CMS. Both of them have been great on Gotham, but this time their double-act reaches new levels of excellence.  In turns defeated and defiant, Taylor's Penguin is one who goes through so many emotions: the shock, the hurt, the fury, the fear, the hope, the despair of finding love lost, hope regained, and ultimately crushed.

He isn't all whimpering at the end, but also fighting, enraged even.  Even as he is literally caught in Tabitha's whip, being strangled, he will not give up.  Tabitha tries to taunt him by reminding him he did nothing after she killed his beloved mother, but then forcing himself physically higher by standing straight and on tiptoes, he looks at her and snaps, "Yet!"  One leaves The Gentle Art of Making Enemies both admiring Pengy's spirit and sad for his tragic end.

Smith too channels a rage within him, but also some hesitation, some confusion about what to do.  It is not a confusion about his sexual leanings: he doesn't find himself all of a sudden either in love or attracted to Penguin.  Rather, his confusion comes from Penguin not following up on Nygma's expectations when Pengy won't sell out Nygma.

Is Pengy really capable of love?  Nygma, despite shooting him, now has some doubt.

I loved the shout-out to The Lady From Shanghai in the final confrontation between Jerome and Bruce, and loved the sense of chaos and insanity of this dark night of Gotham's soul.  The flipping of convention, with the evil Jerome in all-white and the moral Bruce in all-black, was inspired (intended or not)  The cinematography, always Gotham's strongest aspect, worked well especially as dawn arises, the light now cementing Bruce Wayne's ultimate destiny.

Now, as for the graphic violence in the episode.  Yes, that always troubles me.  The circus was extremely violent: piranhas feeding, humans as live whack-a-moles, and other assorted tortures.  The attacks at Wayne Manor too, but the gutting of one of Jerome's goons to smear on Bruce's lips as 'makeup' was really too much for me.

Again, The Gentle Art of Making Enemies really knocked it out of the park.  Brilliant performances, a continual sense of tension, and wild twists and turns made this one of the best Gotham episodes.

Next Episode: How The Riddler Got His Name
Posted by Rick at 2:51 AM