What is fascinating about Pax Penguina, the first episode of Gotham Season Four, is that our characters in this Batman adaptation have in essence, fully embraced their personas in one way or another.  We do have a touch of deja vu with another 'mad formula wreaking havoc', but with some good performances, lots of hinting about the future for these characters, and a surprisingly low violence level (though maybe a bit too much on another front), Pax Penguina is a good strong start to this season.

Oswald Cobblepot aka Penguin (Robin Lord Taylor) has retaken control of the criminal underground. He's also added a totally new innovation: a license of misconduct.  In exchange for a cut of the loot, Penguin will allow certain criminal to commit crimes without worry of arrest from the Gotham City Police Department.  Even more brazen, Penguin is in cahoots with the new Mayor and Police Commissioner to give them a thin cut as well in exchange for the GCPD playing nice.

Everyone does play nice, except for one detective who has an unbending sense of justice: Detective Jim Gordon (Ben McKenzie).  He won't bend, even if his partner/acting Captain Harvey Bullock (Donal Logue) asks him to, and even if crime in Gotham City is down by over 50%.

The drop in crime might also be related to a new player: Bruce Wayne (David Mazouz).  He has been scouring the city at night, looking to take out anyone who is committing crimes.  He too is both puzzled and displeased at this License of Misconduct.

Pengy, for his part, is thrilled, and much too concerned over the opening of his Iceberg Lounge club to care, or even pay much notice to Tabitha Galavan (Jessica Lucas) or her newest protege, Selina Kyle (Camren Bicondova).  He does, however, note that there is a renegade group of criminals who is not playing ball with him, insisting on doing their own thing.

Gordon, noting that this gang does not have a Licence, can pursue them to his heart's content.  That leads him and Bullock back to an old frenemy, Jonathan Crane (Charlie Tahan), last seen in Season One.  The rogue gang is after the Crane's fear formula to use against Penguin, and they need the terrified and unstable Jonathan to get it.

As it turns out, all the agendas collide at the Iceberg Lounge opening.  Bruce and Penguin face off (and surprisingly, Bruce is taller), Gordon hoodwinks both Penguin and the rogue gang into facing off, Tabitha and Selina appear to be seeking out licences while Bruce and Selina continue their odd dance d'amour, and Penguin, with help from his newest henchman, Victor Zsasz (Anthony Carrigan) come well within getting rid of these meddlesome hoods.  It's only the frustration of Pengy's girl Friday Ivy Pepper (Maggie Geha) that brings things crashing down.

The gang manages to spray Pengy with the fear formula, and he sees in terror what he fears the most: his old frenemy Edward Nygma aka The Riddler (Cory Michael Smith) returning.  The gang members that manage to escape get a surprise of their own, as Jonathan has completely disappeared, the figure of The Scarecrow having completely taken over. 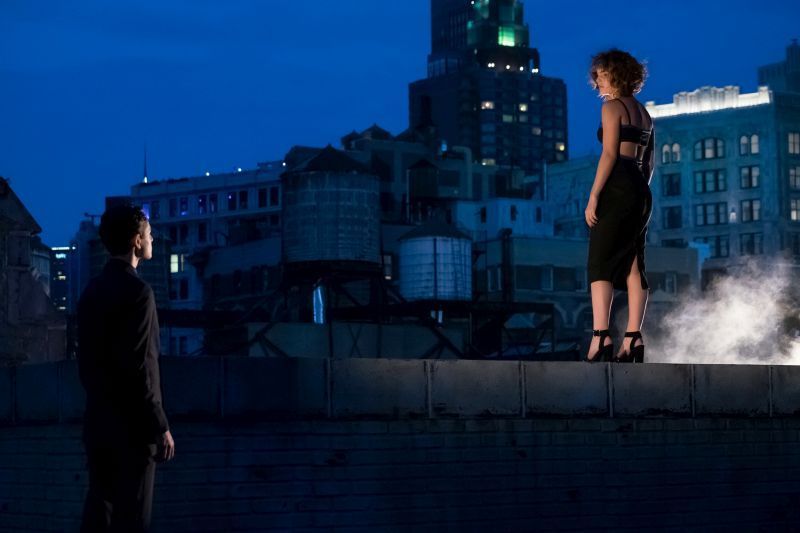 One aspect of Pax Penguina that I did enjoy was the surprising lack of on-camera violence, something that Gotham has at times gotten carried away with.  One aspect of Pax Penguina that I did not enjoy was the visuals of what terrified people the most.  To be fair, it was not as graphic as it could have been, but at the bank robbery I think the visuals for the terrified people would be a bit too intense for children and tweens.  Parents should be wary of allowing anyone younger than 16 to watch Gotham.

I think another part that I could do without is a sense of repetition.  Last season, we had the Tetch virus, and now, it looks like the Fear Formula of the Cranes is going to have a part in the goings-on.   We just got through a long story about chemicals doing evil things to people.  Can we see that again?

However, a lot of good things are in Pax Penguina.  We get great nods to the future relationship between future Batman and future Commissioner Gordon: Bruce appearing and disappearing out of nowhere to help Gordon with an investigation, Gordon being smart but Bruce giving him that one little detail the detective didn't see.  We also see that work between Bruce and Selina continuing, one able to match the other.

It allows for a little bit of humor to sneak in; as Bruce and Selina talk while walking on the ledge, Alfred comes upon them.  "Honestly, you two.  Why couldn't you go to the cinema like normal teenagers," he asks them.

A big part of Pax Penguina's success is with the performances, and a large chunk of credit goes to Robin Lord Taylor as our beloved Pengy.  Not only has he now fully embraced the Penguin persona (he himself calls this new era in Gotham the 'Pax Penguina'), but he delights in being so wicked and unapologetic about it.  Taylor has consistently managed to be evil without being camp, and any actor/actress who wants to see how to play a villain without being over-the-top would be well-informed to see a clip reel of his Penguin.

The cinematography also helps: when he is detailing his plans for the rogue gang, his performance and the visuals make Penguin look almost demonic.  When Penguin sees what he fears the most, it gives Penguin a shocking vulnerability, the terror really hitting him.

It does also lead to an amusing headline in the Gotham Gazette when detailing his meltdown at the Iceberg Lounge: Penguin or Chicken?

Mazouz has really taken command of his Bruce Wayne, still learning how to be that vigilante and working to control himself, using his mind and body to take down his opponents large and small.  Bicondova too continues to go from triumph to triumph as Selina, her fighting skills still strong but with room for improvement.  It makes their evolution into Batman and Catwoman both believable and highly entertaining.

Carrigan, who at times gets lost in the shuffle as Victor Zsasz, manages to be both menacing and oddly amusing.  Sadly, Geha has little to do except bring chaos to Pengy's party, but hopefully she will be better used in future episodes.  You don't make Ivy Pepper or Poison Ivy older just to leave her lost in the wilderness.

Guest star Tahan does not have much to do except look frightened as Jonathan Crane, but given that he was not the main focus of Pax Penguina one cuts him some slack.  Sadly, it

Pax Penguina does what it needs to do: set up things for the upcoming episodes, if not whole season. With strong performances, always excellent cinematography and surprisingly tame moments, it is a good way to begin our latest plunge into this city's heart of darkness.

Next Episode: The Fear Reaper
Posted by Rick at 2:00 AM