Picking up from where we left off, The Scarecrow does just about everything right.   We get a story that is exciting and well-acted.  We get a treat of seeing two iconic villains meeting for the very first time.  We get another super-villain waiting in the wings who is genuinely sympathetic.  If it weren't for one big question not being answered The Scarecrow really would have been a homerun.  As it is, it's a triple.

Detectives Jim Gordon (Ben McKenzie) and Harvey Bullock (Donal Logue) have learned who is the serial killer targeting people with phobias.  It is Dr. Gerald Crane (Julian Sands), a biology professor who thinks fear is a flaw in evolution.  He is attempting to overcome all fear by taking victim's adrenal glands and use them to create an anti-fear serum.  Crane's own fears come from when he was unable to save his wife in a house fire, his fear overruling him.  In that fire many years ago, he was able to save his now-teen son, Jonathan (Charlie Tahan).  Gerald uses the serum on himself and on Jonathan, the latter extremely uncomfortable with all this but pushed into it by his love for his father.

Speaking of fathers and son, Bruce Wayne (David Mazouz) goes off into the woods near Wayne Manor to keep a tradition he kept with his late father: watching the sun rise.  Now however, Bruce has no father, the closest being his butler, Alfred Pennyworth (Sean Pertwee).  Out in the woods, Bruce manages to release some of the pent-up anger, but he also rolls off a hill, spraining his ankle.   Out in the woods alone, Bruce must bring himself up. 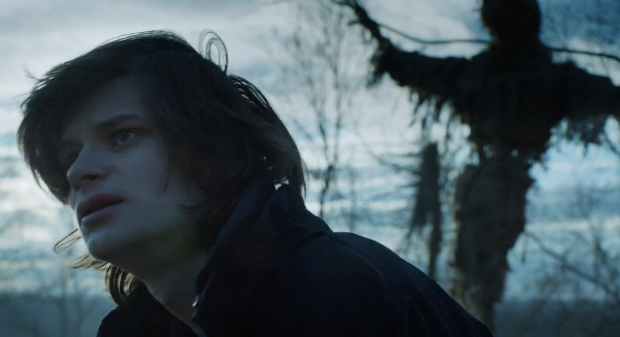 Penguin (Robin Lord Taylor) has managed to escape the wrath of Don Maroni (David Zayas), whose efforts to kill him for being a snitch for his rival, Don Falcone (John Dorman) have left the waddler quite fearful.  Penguin is so fearful he doesn't understand why Don Falcone is going on about redecorating Fish's old club.  The Don tells him that without money they have no power, and if they have no power they have no influence, and without both power and influence Penguin is as good as dead.  Thus, the way to power and influence is to make money, and as such, the club has to reopen.  Falcone gives Penguin Fish's old club and now formally allows him to serve openly as one of Falcone's crew.

Maroni will not be dissuaded to kill Penguin despite Falcone's calm negotiations with Maroni.  The wily old mobster shows his younger rival a thing or two.  He tells Maroni that he likes Penguin's shrewdness and survival skills, along with the fact that Penguin knows he will never be the boss.  The Dons come to an agreement: again Penguin gets to live, and they will share Chief Justice Stanley Turnball, whom Falcone captured and tortured at his estate to Maroni's amusement when His Honor was drugged after a romp with a young boy goes wrong.  The boy is dead and the good judge is framed to look like he's gone Fifty Shades of Grey with a dominatrix.

Fish Mooney (Jada Pinkett Smith) has problems of her own.  She is being kept prisoner in some mysterious jail where she is constantly threatened.  Only her new right-hand man Kelly (Dashiell Eaves) is there for her.  Fish quickly turns the tables on the man in charge, Mace (Babs Olusanmokun) with a mix of feminine wiles and ruthlessness.  However, even she is horrified when a new prisoner emerges, missing her eyes.

Penguin's club opening is a disaster.  No one comes to Oswald's, not even Gordon, whom Penguin has invited personally.  Worse, Don Maroni crashes the party.  Penguin is safe, so long as Don Falcone is alive.  Finally, while Gordon and Bullock track down Dr. Crane, it is too late to save Jonathan, whom Gerald has given a large dose of the anti-fear serum that may leave him permanently damaged with fear.

There were two things I did not like about The Scarecrow.  The first is the prison Fish finds herself in.  Last episode we saw her about to fight the pirate overrunning the ship she was fleeing in.  Now she finds herself in this bizarre prison.  We don't get any explanation as to what/who/where/why Fish is where she is. Like Fish, we're kind of just thrown in there and asked to figure it out for ourselves.  I did enjoy the fact that Fish has found a new henchman of sorts with Kelly (even if he is by no means tough, merely the first person to show Fish any kindness and loyalty).  I also enjoyed how quickly she brought a coup and that even someone as jaded and tough as Fish found herself momentarily fearful at the end, I still can't get over that we found ourselves in this odd world.

The second thing I did not like about The Scarecrow is something Gotham to my mind keeps getting wrong.  It kills off great villains.  I think it is because Gotham is a police drama where we expect cases to be closed.  This is not like The Mentalist, where the Red John story seemed to go on through fifteen seasons.  Would it really have been so awful to allow Gerald Crane to escape while keeping Jonathan alive and tortured?  I do wish Gotham would stop killing off potential villains instead of letting them flee into the night.  After all, it is going to have a Season Two.  They could spread the love.

However, there was simply so much to love in The Scarecrow.  We got to see two of the most iconic Batman villains meet for the very first time.  Having the nebbish Edward Nygma and the thug Oswald Cobblepot interact made sense within the context of the show, and everything about it was brilliant.  The score balanced each character out: the violins with Nygma, the cellos with Cobblepot, and both apparently dueling it out.  Cory Michael Smith (whom I'm glad is getting more screentime) and Robin Lord Taylor (who has become the de facto/breakout star of Gotham) work so well together you really want to see the two real-life friends share more scenes.  Edward's fascination with Oswald versus Oswald's puzzled and irritated manner to where he can scare the Forensics officer easily is really a terrific scene all around. As a side note, only now do I see how tiny RLT is as a person.  It's one thing to see how 6' CMS would tower over him, but even 5'8" McKenzie appears to dominate RLT (who if IMDB is to be believed, is 5'6").  This doesn't take away from my admiration of/for RLT.  On the contrary, it makes me like him more: a small man being so dominating throughout.

Another extreme positive are the performances all around.  I've already covered CMS and RLT, but I think McKenzie needs a bit of praise too.  For once, he allows Gordon to have some emotions apart from 'stoic'.  His scenes with Baccarin display a warm and playful side (much better than with the WASPy, whiny Barbara), which allows him to be a little more human than he usually is.  Baccarin for her part is growing better and better as Thompkins and making her a real person: intelligent, fun, flirtatious and classy all at once.

Even JPS, who I think has been divisive within fan circles for her take on Fish, makes her here a survivor determined to come out on top no matter what.

Visually, we get some incredible moments.  One of Gotham's greatest strengths is its look, and The Scarecrow is yet another excellent example of what it can do.  When Maroni crashes Oswald's opening, he asks for champagne. Penguin keeps pouring, obviously terrified despite being under Falcone's protection.  As Maroni threatens Penguin, we see the champagne overflow its cup, then to a shot of it pouring to the floor between Oswald's legs.  The double meaning here is simply brilliant.  In a similar vein, when we saw Dr. Crane's visions, they were appropriately spooky.

Lest I forget, we got some great performances from Sands as the deranged yet tortured Dr. Crane Senior and Tahan as the equally tortured Crane, Jr.  The always reliable Mazouz continues to do excellent work as young Master Bruce, full of anger and sadness as he slowly is shaped to becoming who he will be.

The Scarecrow really had an incredible balancing act to perform.  We had a lot of stories going on: Bruce, Penguin, the Cranes, Gordon, Fish.  It balance each of them pretty well without having one either short-changed or overwhelm the other.  If it weren't for the fact that we have no clear answers as to what/where Fish is, this really could have been a knock-out episode.  However, The Scarecrow made things much more interesting on Gotham and has continued its triumphant march.

Next Episode: The Blind Fortune Teller
Posted by Rick at 6:30 AM