Our third film in the African-American film retrospective takes place long after slavery has been abolished, when African-Americans still were not wholly integrated into general society but had a distinct world all their own.  It also is one where the world of opera met the world of a distinctly American creation: the musical.

Carmen Jones has earned a place in film history as the one that earned an Academy Award nomination for Best Actress to an African-American female for the first time in its history.  Dorothy Dandridge, who played the title role, would not win (no surprise), and it would take forty-six more years until a black actress broke that color barrier when Halle Berry won for Monster's Ball.  In a curious historic turn, Berry won an Emmy Award for playing Dandridge in a biopic, Introducing Dorothy Dandridge.  It should be noted that Berry remains, as of today, the only African-American actress to win a Best Actress Academy Award (unless you count Charlize Theron, who is African by way of her being born in and being South African.  Curiously, she won for her role in Monster, not to be confused with Monster's Ball.).  Yet I digress.

Carmen Jones is an adaption of the Georges Bizet opera Carmen, set in the American South, with an all-African-American cast.  There is no white face to be seen, even in street scenes and boxing matches.  Whether this is a reflection of the reality of the times or just a way to communicate that this was a 'black world' so to speak, I can only guess at.  However, Carmen Jones does well in adapting both the story and the music to a contemporary and African-American setting.

The film pretty much follows the opera as I understand it, with a few necessary changes (for example, instead of a Toreador, we have a boxer.  Not many black bullfighters running around I imagine).  Carmen Jones (Dandridge), works at a parachute-making factory.  She is a temptress, with her eyes on Joe (Harry Belafonte), a soldier at the base.  Joe is engaged with sweet Cindy Lou (Olga James), fresh off the country.  Carmen, though, has taken a shine to Joe and is determined to seduce him.

As it happens, Carmen gets in a fight with Frankie (Pearl Bailey) at the factory, which gets her arrested.  As the factory is on base, Joe has to take her to jail.  She knows the roads better than he, and his stubbornness causes them to walk part of the way.  They stop at Carmen's grandmother's home, where she manages to complete her seduction...and escape.

Joe goes to the stockade, while poor Cindy Lou waits and he pines for the alluring Carmen.  Carmen has moved on, and has a chance meeting with Husky Miller (Joe Adams), a famous and successful boxer.  He too falls for Carmen, but Carmen has no interest, still having conflicting feelings for Joe.  Frankie, who by now has patched things up with Carmen, wants her to go with Miller to Chicago as Frankie and Miller's agent Rum Daniels (Roy Glenn) will benefit.  Joe, however, who happens to go to the same club, begs Carmen to be with him, but she again rebuffs him when she learns he's going through with his plan to be a pilot.   She then flirts with Sargent Brown (Brock Peters), Joe's commanding officer who have a mutual dislike.  Joe punches Brown, and he decides to flee to Chicago rather than go back to the stockade...or lose Carmen.

While he's hiding out, Carmen continues to ask Frankie for money, but the only way to get it is to be friendly-like with Husky.  Eventually, she does, but Joe at first doesn't know.  Still, he suspects something, and when he learns he becomes angry and more determined to keep Carmen to himself.  Cindy Lou, who has found him, begs him to face the music, but he won't.  Carmen for her part, goes to Husky's hotel room where he's having a pre-match party.  While playing cards, Carmen, a believer in tarot, draws a nine of spades, a card she believes signals her impending death.  At the boxing match, while the military police are closing in on him, Carmen is too swept up in Husky's latest victory to give thought to Joe.  Joe finds her and when she again rejects him, he strangles her.  The police find him above her body, about to face the price for his sins. 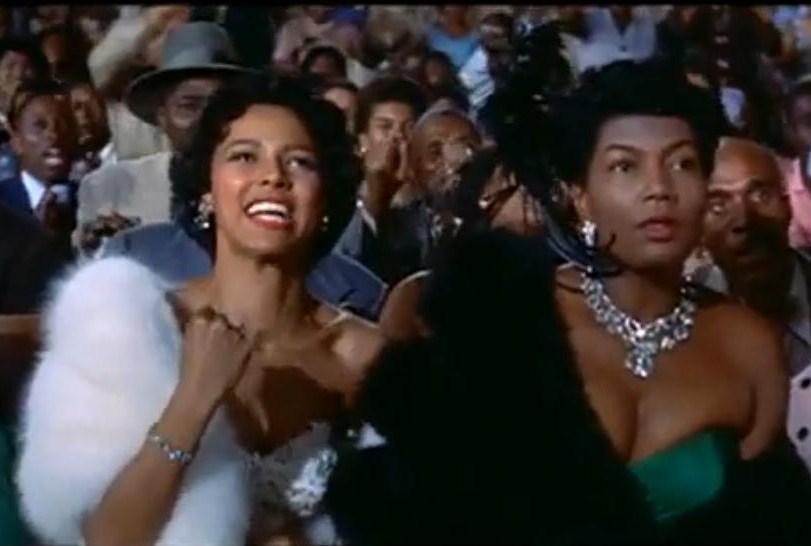 Carmen Jones is a rare film indeed.  For starters, it presents African-Americans as fully-formed.  We don't have any stereotypical parts in the film: they are not playing servants or simpletons.   In fact, we see something almost unheard of in pre-Civil Rights films with an all African-American casts (a rarity in itself): the black performers could be quite glamorous and financially well-off.  They also were not in any way dependent on whites.  There was not a white face to be seen, even among the military.  It should be remembered that it was less than a decade since the armed services had been integrated.  Granted, the setting had segregated units so it also would have made sense to have black military deal with other black military, but the curious thing is that in scenes with large crowds, the film was in its own way segregated, only segregated against whites.

The second rare aspect to Carmen Jones is that you have opera in a musical, which would be quite unusual regardless of race.  Making the characters white, or Hispanic, or Asian, it still would be quite rare to have such grand music used for a musical, which is generally light, upbeat entertainment.  Carmen Jones ends, like almost all good opera, on a bleak note (The Marriage of Figaro and The Abduction from the Seraglio being famous exceptions).  It keeps true to the source material, but for a musical to end unhappily, with a dead woman on stage, is quite shocking (if not unexpected, given how Carmen has been).

Carmen Jones does a simply fantastic job in integrating Bizet's music to the contemporary setting.  It's no surprise given that it's Oscar Hammerstein II who adapted it for the stage.  Take for example The Toreador Song, one of the most famous songs from the score.  Here billed as Stan' Up and Fight, we get Husky boasting on how he can knock anyone down.  The lyrics and the music blend so well that if one didn't know they were written separately and a century apart, one wouldn't be any the wiser.

As a side note, why Stan' Up and Fight was never adopted as a Civil Rights anthem or song of defiance I'll never understand.

Another excellent example is The Habanera, another legendary song.  Here, as Dat Love, Carmen eludes her contradictory style to love: she pursues those who reject her but rejects those who pursue her.

As stated, Dandridge earned an Academy Award nomination for her performance as Carmen, and I think it was merited.  At turns alluring, selfish, and sympathetic, Dandridge does excellent work showing a fully formed woman (no pun intended).  Dandridge makes Carmen a flirt, but one who grows as time goes on.  In her conflicting emotions, Dandridge creates a wonderfully-played character.

Belafonte too does well as Joe, though I would say in his passion for Carmen he sometimes comes across as almost an idiot.  Then again, when someone is in the throes of passion, perhaps they are idiots.  Bailey, who was the only cast member to do her own singing (as it was decided to use professional opera singers like Marilyn Horne to dub Dandridge despite Dandridge and Belafonte having perfectly acceptable singing voices), was a standout as Frankie, the friend who doesn't mind cashing in herself on Carmen's back.

On the whole, Carmen Jones did an excellent job all around.  It integrated the music to the setting. It had excellent performances all around.  It is a strong picture that those who love good musical and examples of what can be done when all things come together.  It is perhaps a bit long (or at least feels that way) which is odd given it lasts less than two hours.

However, Carmen Jones is an excellent showcase to how, with the right parts played by the right actors, race really has nothing to do with quality.