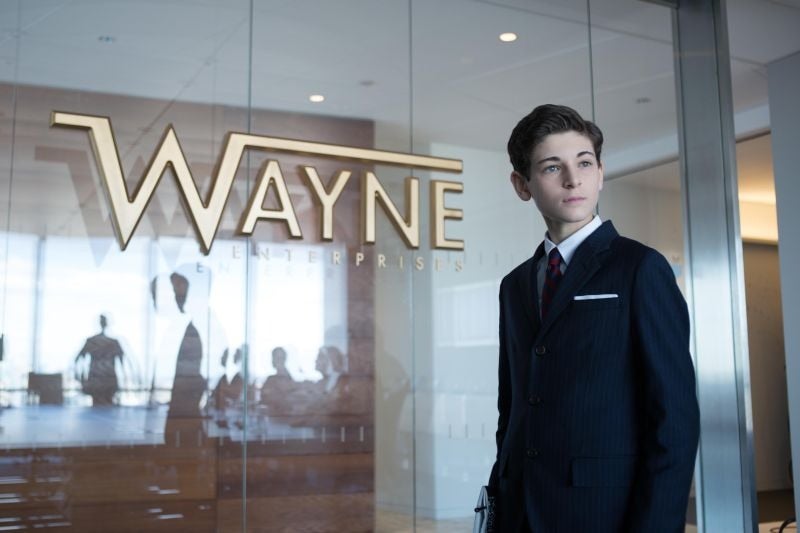 I've pretty much stood up for Gotham when a lot of people I know dislike many aspects of it.  Most of the criticisms on Gotham I find really petty: a thin Penguin, Bruce Wayne having no purpose on the show, too many villains.  Even among the weaker stories, I found something to love.

The Blind Fortune Teller though, is one where I'm having to search deep, deep, deep to find some positives.  There were, and some from unexpected sources.  For me however, it felt like a hodgepodge of stories, where things didn't go anywhere or went by so fast that it almost didn't matter who was there.  Given that this is suppose to be the much-touted debut of the most legendary of Batman's foes, The Blind Fortune Teller is as close to a flop as I've seen all season.

Detective James Gordon (Ben McKenzie) and his newest girlfriend, Dr. Leslie Thompkins (Morena Baccarin) take in Haly's Circus, where they are entertained by among other things, The Flying Graysons acrobats.  Pretty soon though, chaos breaks out when a fight breaks out among the circus folks.  It revolves around the murder of Lyla, a snake dancer.  Lyla's son Jerome (Cameron Monaghan) isn't too down about the killing of his wildly promiscuous mother, who apparently was seeing both a Grayson and a Lloyd, members of a feuding family.  Paul Cicero (Mark Margolis), the title character, brings a message from beyond the grave: "The Servant of the Devil lies in the Garden of the Iron Sisters".  Pretty vague in terms of revelation, but Thompkins, who welcomes the supernatural, quickly figures it out.  Together, they find a major clue and pieces the mystery together.  Paul isn't just a family friend to Jerome, he's family.  Jerome appears to breaking down mentally, and ends by laughing maniacally.

Meanwhile, Fish Mooney (Jada Pinkett Smith) has taken over the prison and realizes they are being harvested for their organs.  She tells them that if they stand together, they can defeat them, but makes it clear that 'some' of them will escape.  To do that, she gets the members of 'the family' to kill the one their captors want.  With that, she gets her way and meets the boss of the organization.

Her rival, Oswald Cobblepot (Robin Lord Taylor) is making a right mess out of Oswald's, the new club he is running.  He even gets Mama Gertrude Kapelput (Carol Kane) to entertain, and when a patron boos Mamma, Penguin gets up and smashes his head in with a bottle.  To fix this chaotic situation, Victor Zsasz (Anthony Carrigan), Don Falcone's right-hand henchman, brings someone to help Penguin out: Butch Gilzean (Drew Powell), Fish's former loyal henchman.  Penguin is terrified, but Victor has been 'working' with Butch to make him the delightfully subservient person, right down to literally dancing when Penguin tells him to.

Barbara Kean (Erin Richards) is back, and isn't too surprised to find both Selina Kyle (Camren Bicondova) and Ivy Pepper (Claire Foley) crashing at her pad.  In fact, Barbara, slightly bombed, actually takes their advise on how to get Jim back, and she comes close, but she walks in on him and Leslie making out and walks out in disgust without either of them noticing her.

Finally, young Master Bruce Wayne (David Mazouz) decides to address the board of Wayne Enterprises about two matters he's concerned about: the company working with criminal underworld and development of weapons of mass destruction.  The board is shockingly and openly condescending towards Bruce, but he will not be dissuaded. 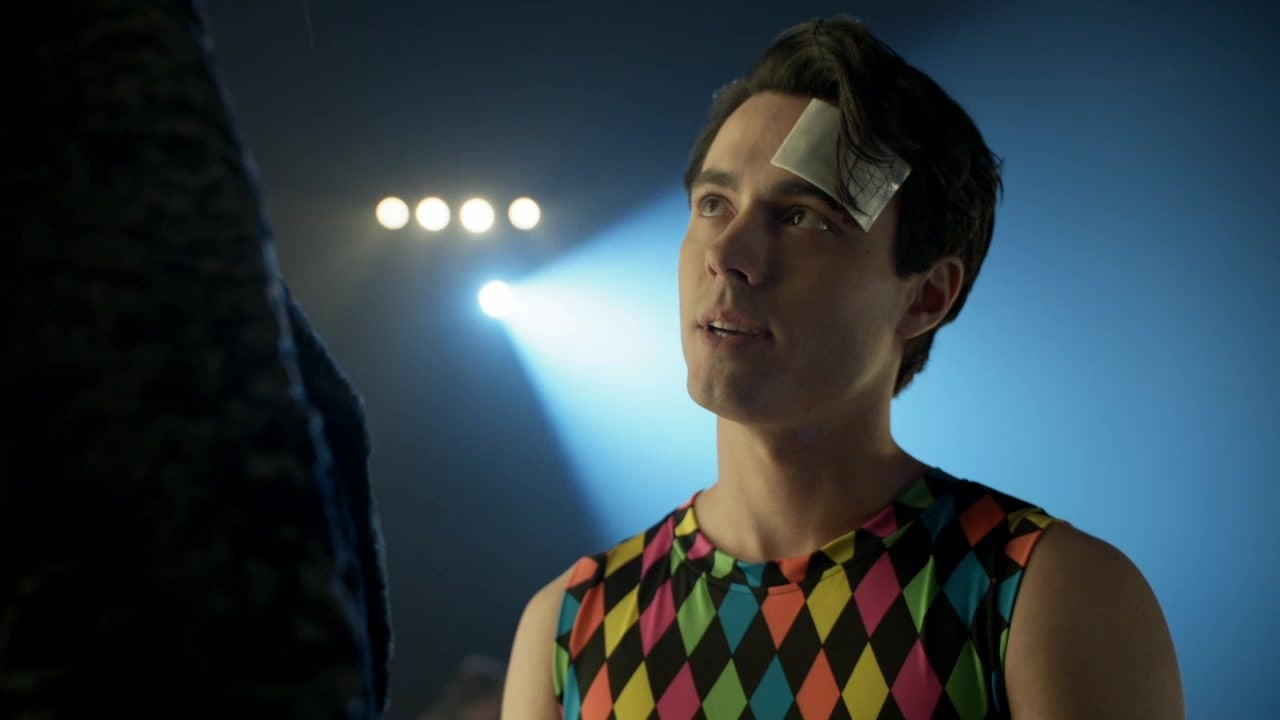 For myself, I felt The Blind Fortune Teller went nowhere.  My biggest disappointment revolves around Jerome, who is suppose to be the future Joker.  At least it makes sense to make him close to Bruce's age, and we get certain trappings to the Clown Prince of Crime.  However, I pretty much reject Jerome as THE Joker, only because again, he didn't (or hasn't) escaped, and from what I understand is just a one-time guest star.  What is the point of introducing the most legendary of Batman foes if you're going to throw him out like that?

Seeing the case resolved practically in minutes is similarly a disappointment.  Would it really have killed Gotham to keep Jerome on a continuing story?  The idea of Paul being Jerome's father was a bit too easy for me.  I can't shake the feeling that Gotham blew a good chance to make the alleged Joker's introduction and backstory more interesting and longer instead of making him the criminal-of-the-week.

Misusing Donal Logue, who serves as more of a bemused observer than either a serious detective or a sharp but sarcastic figure, is even worse.  It's almost as if Logue was bored throughout the episode and was there because he needed to be there.  The same I can say for Cory Michael Smith as Edward Nygma, who at least makes the most of his one scene where he shows he isn't too thrilled with Thompkins' ability to solve things as well as he thinks he should.

It's unfortunate that The Blind Fortune Teller's big draw is what kills the episode, because there was a lot of good in it.  We got a logic to the Fish Mooney storyline.  Granted, a pretty wild one, but at least one where we saw JPS' bombastic take on Fish work for her.  The story was also a great showcase for Mazouz, who tends to be underused on Gotham even if the show focuses on Jim Gordon than on Bruce Wayne.   He knows the board is practically ignoring him, patronizing this child.  However, Mazouz has a commanding presence throughout the scene, not rattled at all.  He calmly and coolly addresses the board, stating that his age is irrelevant.

Another standout is Baccarin, who is a joy as Thompkins.  She has a personality: bright but fun, enthusiastic about things and aware of what is going on.  She also makes her views perfectly clear to Gordon, showing her a better girlfriend than the patrician and completely screwed-up Barbara.  McKenzie and Baccarin work well together, and he even manages to lighten up a bit, showing a humor that rarely comes out in his super-serious moment.  When Thompkins tells Gordon that there are many things that can't be explained by rational science, he remarks, "People who enjoy folk dancing can't be explained by rational science".  It's so rare to hear Gordon make a quip, and it was nice to see him do so.

The scenes with RLT are still good (who knew Penguin tickled the ivories so well) and his Mother-love would put Norman Bates to shame.  RLT still manages to do well with even his small scenes.  Even Andrews, who has gotten a lot of hate for her Barbara, manages to strike a good balance because she isn't full-on bonkers.  I do wonder why she doesn't really question why two girls are crashing at her joint and doesn't really think much of it.  However, given how crazy Barbara has been, I'm willing to cut her some slack.

A real treat was in thinking that James Gordon brought the future Dick Grayson's parents together.  Robert Gorrie as John Grayson and Abbie Snee as Mary Lloyd had a natural rapport in their mutual hostility and defense of their respective family members who are really hiding that they are in love with each other.   I enjoyed their performances and hope that they do make a return appearance.  It would have been interesting and I think better if, however, we could have seen more of the circus and to have made this story at least a two-part story.  Gorrie, Snee, and Monaghan (who did a pretty good job as Jerome) deserved much better than what they got.

I haven't mentioned Monaghan, and I think he did a great job (minus when they find the body, where he looked as if he was trying too hard to be shocked and devastated).  However, when he confesses, Monaghan is downright creepy, which is what he should be.  Pity he got pretty short-changed by the script.

The Joker, if that is what Jerome is, should have had a much better debut.  Even Harvey Dent had a stronger appearance in his first story.  Again, there were a lot of good things within The Blind Fortune Teller: standout performances by David Mazouz and Morena Baccarin along with guest stars Robert Gorrie and Abbie Snee.  However, a lot was off.  A weak debut for what is suppose to be an iconic figure, so weak I still don't accept it.  A crime solved far too quickly.  An episode that seemed to be a placeholder while we get to a longer and better story.

I found with this story that Gotham hit a patch of very bad fortune.

Next Episode: Red Hood
Posted by Rick at 7:06 AM