It's odd that for a series built around future Commissioner James Gordon, it's the villains who are more interesting.  This is no slam on either Gordon or Ben McKenzie, as the character is meant to be noble and stoic through everything.  However, in what appears to be a tradition on Gotham, the title character in Welcome Back, Jim Gordon has less to do with the story as certainly Robin Lord Taylor's Oswald Cobblepott aka The Penguin or even David Mazouz's Bruce Wayne.  Even Jada Pinkett Smith's Fish Mooney has a greater role, and here is where we start.

Mooney has been left to be tortured to death for attempting a coup against Don Carmine Falcone (John Dorman).  She however, is defiant, her style of crazy finally fitting in.  Fortunately for her, Fish's loyal henchman Butch (Drew Powell) comes in at the perfect time to save her.  Butch urges her to flee, but she is determined to get revenge on Penguin and won't go without trying to kill him.

Penguin, for his part, is too busy celebrating what he thinks is his ultimate triumph.  At Fish's club, which is now his, he brings Mama Gertrud Kapelput (Carol Kane) to see her son's new club.  She is thrilled with it all, thinking it reminiscent of opera houses back in the old country.  Champagne flows freely, and Mama Kapelput even finds a lovely scarf to accentuate her wardrobe.

Oh, yeah, and then Gordon comes in, asking for a favor.  A witness to a drug-related murder has been murdered himself at police headquarters, and as usual Gordon is angry that there are corrupt cops.  He is convinced that Narcotics Officer Arnold Flass (Dash Mihok) is involved, if not the actual killer.  Gordon's partner, Harvey Bullock (Donal Logue) tells him Flass is involved in the drug trade himself, using his position to run narcotics, but while Bullock urges caution, Gordon goes in all guns blazing.  Gordon asks Penguin to get info on Flass, which Penguin (who trusts Gordon) agrees.

For his part, Bruce is back from temporary exile in Switzerland.  He is determined to find Selena Kyle (Camren Bicondova).  He and Alfred (Sean Pertwee) run into Ivy Pepper (Claire Foley), who does pass on the message.  Bruce has a gift for Selena, a snowglobe.  Selena, however, declines the gift and tells Bruce to leave her alone, and that she didn't witness the murder of his parents.  A brokenhearted Bruce is found by Alfred, crying, the snowglobe smashed.  Alfred asks if he'll keep crying, and Bruce tells him to get the broom.  He'll rally.

Penguin gets drunk metaphorically and literally, and is left unprotected as Fish and Butch get back to the club.  She is going to get hers against the little Penguin but at the exact right moment, Falcone's main hitman Victor Zsasz (Anthony Carrigan) comes in, not to save him, but to get Fish and Butch.  In the ensuing battle Penguin is saved, Fish escapes and Butch is recaptured.  Fish is helped to leave Gotham by Bullock, who may see Fish as more than a friend.  Gordon gets to arrest Flass, but this time Captain Essen (Zabryna Guevara) has his back, ordering Flass' arrest in the precinct.  Perhaps if Gordon knew how mean Flass has been to Edward Nygma (Cory Michael Smith) in his efforts to woo Records office staff Kristen Kringle (Chelsea Spack), he would have thrown a few other charges too.

Now, I think we might have to touch on perhaps WBJG's weakest point: Butch and Fish's escape.  Butch was trapped in a van, then when he was about to be hauled out, he was gone.  He then whacked the two drivers/hitmen and managed to get to Fish right on time.  Come to think of it, the 'nick of time' rescues of both Fish and Penguin were a bit far-fetched to believe.  We don't know how it was all done, but on this point I'm not going to belabor it.  I rolled along with this because we needed it to happen.  One hopes though that Gotham doesn't try to pull this stunt again. 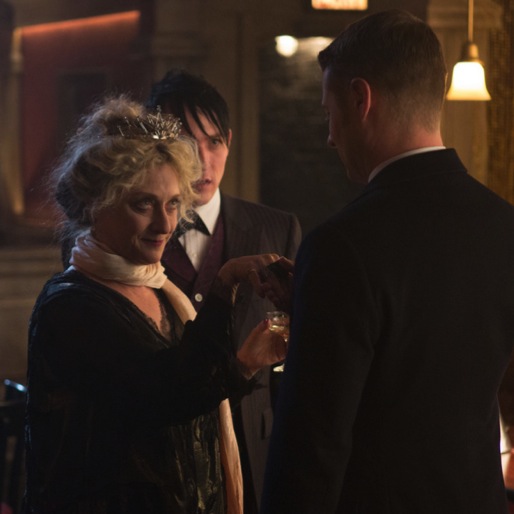 It's just that everything else in WBJG that worked so well we can pretty much paper over some of the other more illogical aspects.  Let's start out with the performances.  This Robin Lord Taylor, this kid really has it and has made Penguin his own, matching (and in my view, outdoing) both Burgess Meredith and Danny DeVito's interpretation of the Penguin.  His scenes as he gloats privately at the empty club are both amusing and indicative of his drunken state. The quiver in his voice and body as Mama Kapelput slips on Liza's scarf is brilliant and subtle.  His genuine like for Gordon (whether it is just professional or not I leave up to the reader) is pleasant.  Seeing him kissing Fish's foot in an effort to save his life only to turn and gloat how even as he appears to be totally defeated he still managed to outwit her shows the guy's range.  RLT is simply astonishing as The Penguin, and I'll say it again: he deserves at the very least an Outstanding Supporting Actor in a Drama Emmy nomination for his role.

We also see that for once, JPS' Fish is uncharacteristically unhinged.  Now, I figure many people think that she always plays Fish as unhinged, but I would say she has always made Fish a bit camp.  Nevertheless, this time, as she too appears trapped with no way out, seeing her defiant is a great turn for someone who I think knowingly plays Fish as a bit over-the-top.  Powell's Butch comes into this own as her loyal aide, and of course, Carol Kane is still wildly fun as the slightly bonkers Mrs. Kapelput, so proud of her Ozzie.  Again, in my world there can never be too much Carol Kane.

CMS balances Edward Nygma's professionalism with his growing lunacy when examining the witness' body, offering riddles as to what the weapon was.  While Bullock is angrily dismissive of such things at a time like this, Gordon does come up with the answer.  "What's strong enough to smash ships but still fears the sun?", Nygma asks.  After a while, Gordon pops up, "Ice", and it was an icepick.  CMS has an almost sad moment as he attempts to woo Kringle, when he finds Flass has been mocking the card Nygma gave her.  When she comes to apologize and thank him for the card, we see Nygma's genuine hurt turn into odd hope.  I think WBJG is another highlight for CMS.

Another highlight is Mihok's arrogant Flass.  One hopes that, while he's been arrested, he does make a return appearance, for he was excellent as the corrupt cop that makes Bullock look like Gordon in comparison.  Logue too had a wonderful moment with JPS in their farewell, showing a softer side we rarely see.  McKenzie is still stubborn as ever, but his scenes with RLT as he finds himself slowly compromising also work extremely well, the struggle genuinely coming through.

In the smaller story, scenes between Mazouz and Bicondova work on so many levels.  They really work well together, her reluctance mixed with his earnestness.  When we see him cry, whether it is due to a potential first love lost or the idea that his parent's death will remain unsolved again is up to the audience, but either way it works beautifully.

There seem to be a lot of parallels in Welcome Back, Jim Gordon.  We have echoes of the past when Bullock and Fish are at the pier, remembering when Gordon urges Penguin to do the same: leave Gotham and not come back.  Fish and Penguin rescued in the nick of time can be another parallel.  Gordon coming to Penguin for help reminiscent of how Bullock had Fish as his informant.  Welcome Back, Jim Gordon really does so well balancing so much and throwing so much at us that it remains exciting and oddly emotional all at once.

Next Episode: The Fearsome Dr. Crane
Posted by Rick at 7:03 AM