Our first look at the African-American experience via film involves own of the toughest: the slave trade.

If nothing else, Amistad tells its story of African slaves caught in a bizarre legal situation not of their making with a certain degree of realism.  I say 'certain degree' because, as in all historic films, a great many liberties with the strictly historic events were taken.  However, I think Amistad's primary role was to show to a new generation how brutal slavery was, as well as to how America struggled with to match its ideals to its practices.

1839.  Although the importing of slaves to the United States has been outlawed since 1808, the human trafficking of Africans to America continued.  Now, the whole matter explodes onto the American stage thanks to the Amistad, a ship carrying Africans to Cuba or to the U.S.  The Amistad has an uprising by the captured Africans, led by Cinque (Djimon Hounsou), a leader in his homeland.  He demands the Spanish sailors return them to Africa, but the Spaniards decide to trick the Africans until they can find refuge themselves on more friendly ports.

As it turns out, those shores are America.  As the Africans have been bought legally in Cuba, the Spanish insist the Americans honor their treaty to the Spanish Crown and that they are the property of Her Majesty Queen Isabella (Anna Paquin in a cameo).  However, the salvage company that has taken the Amistad insists the property belongs to them, and that includes the Africans.  The surviving crewmen get in on the act, insisting the property belongs to them.

Enter into this maelstrom one Roger Sherman Baldwin (Matthew McConaughey), a brilliant attorney (and this may be one of the few times 'brilliant' and 'McConaughey' appear in the same sentence).  he sees this as a legal question of claim, not morality.  Baldwin sees this as the way to win the case and set the Africans free.  He is aided by free black Theodore Jodson (Morgan Freeman) and abolitionist Lewis Tappan (Stellan Skarsgard).  For their part the Africans soon start separating into their own nations while they are kept in a military prison while all this is being sorted out.

The Amistad situation could not have come at a worse time for President Martin Van Buren (Nigel Hawthorne), deep in the midst of reelection. He does not want to displease the South but finds the more abolitionist North is not welcoming either.  The case also does not interest a former President, John Quincy Adams (Anthony Hopkins), who is pretty settled in the House of Representatives.  Eventually, he does come around, to argue the case to the Supreme Court.  Before we got to this stage, we had to endure a trial where Cinque, finally getting some English, stands and makes his demand, "Give us, free.  Us free."  The Amistad case puts one more nail on the coffin of slavery in America, the Africans are returned to their homeland, and Van Buren loses reelection. 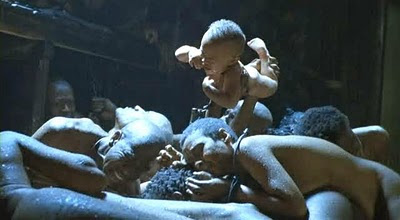 There is certainly a lot to recommend in Amistad.  It has moments of extreme power that make the pernicious and evil work of the slave trade all the more shocking.  Of particular note is when we see the drowning at sea of men and women deemed too ill or unworthy for sale in Cuba.  The horror of this act is something director Steven Spielberg does not shy away from.

As a side note, it is unfortunate that Spielberg wants to focus too much on the visuals that I found a bit overdone.  Another moment is when a baby is born within the slave ship, the baby rising into the light amid the horror and storm the ship was passing through.  I felt it was a touch too poetic, as if it trying too hard to call attention on itself.  Another is early in the film, when a pleasure cruise of sorts is passing by the Africans aboard the Amistad, and both stare in disbelief at each other without saying anything.  A bit of gilding the lily to my view.

There is also the idea that Amistad is fighting a losing battle to draw parallels to our world.  A major subplot was the idea that Van Buren was caught in a situation that could be resolved with compromise.  Coming a year after another Presidential election where we had split government (a Democrat in the White House, a Republican-dominated Congress), I feel there was a subtext about how government with such different views could not work together was being spread around the film.  Granted, these are just my views and I cannot confirm them, but they did come to mind.

However, Amistad is an excellently made film.  Both Hawthorne as the weak-willed Van Buren and Hopkins as Old Man Eloquent Adams gave extremely good performances, not veering into camp or exaggeration but as real people.  I also note the performance of Jeremy Northam as Judge Coglin, who could lose his career if he rules for the Africans.  A figure doing what is right over what is safe...I wonder if we're getting more of those parallels.  Still, in his struggle to fit the idea of right with might, Northam gave a solid performance.

The real highlight was Hounsou as Cinque.  He was powerful as the African leader: one who was courageous, honest, frightened by the new surroundings but fully confident as a man.  While the scene between Cinque and President Adams may be historically inaccurate, it is still a wonderful moment in the film as they see the similarities between them, sons of famous fathers with a legacy to uphold.

The film is extremely strong in how it makes things as real as possible. The struggle to communicate with their clients is handled correctly (the scenes where Judson is himself struggling to relate to the Africans of particular note, for he is American of African ancestry), as is how one of the Africans comes to Christianity.  Yamba (Razaaq Adoti) explains things in ways he would understand: when he points to pictures of Christ, he says that 'everywhere he goes he is followed by the sun' (that being his idea of what a halo is).  The retelling of the story of the Resurrection through African eyes is extremely beautiful and gentle.

Amistad is an excellent film. It is well-made, competently acted, visually splendid film.  It is perhaps a bit long (at a two-and-a-half hour running time that might have it drag a bit) and like I said, with sometimes too much call to its imagery.  However, those are minor points to an incredible film.