Gotham has at least one major problem: how to introduce the famous Batman villains without making them either too old or too familiar when young Master Bruce Wayne finally dons the cowl.  They could do it like how Gotham has handled two of the most iconic villains (Penguin working his way to the top, Edward Nygma still just hinting that he will rise to be The Riddler, but both about a decade older than Wayne, by no means a deal-breaker).  The Fearsome Dr. Crane managed to go about it another way, and it's interesting that at least in this episode, Gotham managed to have its cake and eat it too.  How, pray you ask?  By having essentially a variation of The Scarecrow while making it clear that this is not THE Scarecrow but THE Scarecrow's father who just happens to be pretty much like THE Scarecrow we all know.   The Fearsome Dr. Crane also throws in some wild turns for Penguin, some remarkably touching moments with Harvey Bullock, and manages to integrate other characters like Fish Mooney and Bruce Wayne without it feeling forced.

The Penguin (Robin Lord Taylor) is celebrating the death of Fish Mooney (Jada Pinkett Smith).  However, Don Maroni (David Zayas) gets a call which puts the Don on edge.  It just so happens to be Fish herself, apparently alive and well.  She doesn't take kindly to Penguin's plot to have her taken out.  She decides this is the opportune time to help Maroni out...by telling him Penguin has been secretly working for Don Falcone.  She is too busy laying low to know how this will turn out.  This news of course interests Maroni, but he can't be real sure.  He invites Penguin to an impromptu trip upstate, where he has to "see a man, about a thing".

No warning bells going off there!

Well, it's off to the mountains, where Maroni confronts Penguin about what he knows.  Penguin comes clean and tries to off the Don, but the bullets are blanks.  Maroni is going to literally crush Oswald, but once again, Oswald manages to get out of this deadly situation, and ends up finding unlikely saviors: a church group that is headed to Gotham.

Meanwhile, Detectives Jim Gordon (Ben McKenzie) and Harvey Bullock (Donal Logue) are on the track of a serial killer who is targeting people with great fears.  This means yet more delay in the Wayne investigation, and an unusually formal and patrician Bruce Wayne (David Mazouz) releases Gordon from the investigation (pleasing neither).

Edward Nygma (Cory Michael Smith) performs an authorized autopsy where he makes an important discovery, but he is suspended because he is caught interfering in the Medical Examiner's office.  Not one to stay still, he frames the Medical Examiner by stuffing body parts in his locker.  Gordon tells Dr. Leslie Thompkins (Morena Baccarin), his new girl, that they need a new M.E., but after rescuing Stella Mullins (Maria Thayer), a phobia support group member Bullock's taken a shine to, the figure they know as "Todd" but who is really Dr. Gerald Crane (Julian Sands) escapes, with reluctant help from his son Jonathan (Charlie Tahan).

Mooney is on a slow boat to somewhere, but her ship is attacked and The Fearsome Dr. Crane ends with her and the pirate about to fight it out. 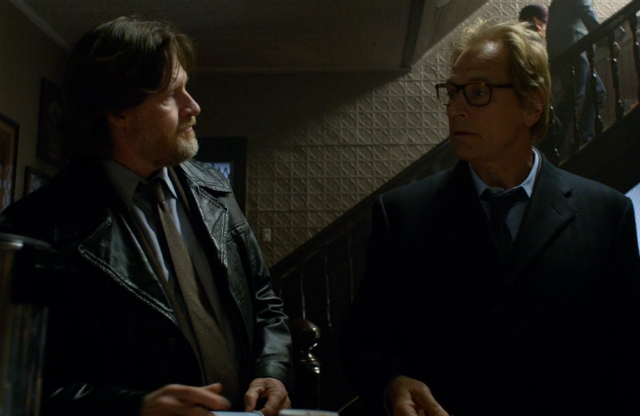 I love the pun in the title: Dr. Crane both causes fear and feeds off it.

From the opening when we get Dr. Crane killing someone off to the closing of the upcoming fight between Mooney and the pirate, The Fearsome Dr. Crane doesn't let up, throwing us one great moment after another.  We start with Penguin's story.  Penguin (and the audience) know that Maroni's clumsy excuse is just a rouse, but what can he do about it.  Robin Lord Taylor is still Gotham's greatest asset, his mixture of menace and weakness again balancing so well.

"This is my favorite part, the begging," Maroni tells Penguin before he puts him in the car about to be crushed.  RLT keeps balancing Penguin's fear of bigger/more powerful men with an intense survival instinct that has served him well.  Zayas plays well against him, each scene between them a wonderful double act of danger for both of them.

Curiously, the real acting standout in The Fearsome Dr. Crane is Logue, someone whom I've grown to genuinely like (a sharp turn from the first episode).  He is still the cynical, sarcastic seen-it-all cop ("I'm a cop.  The only thing I'm scared of is decaf coffee"), but we get to see a potentially different side to our favorite shady cop.  When he is at the fear support group, he tells them that his greatest fear is dying alone, in an alley, with no one to hear him (and I imagine, mourn him).  Logue's performance leaves us thinking that he has dropped his mask and allowed himself to be vulnerable.  However, I did wonder whether he was saying this to say something.  It really was a great performance, reminiscent of how we saw Bullock in Spirit of the Goat, showing that Bullock may be shady and perhaps unethical, but he is also someone with a deeply-buried heart. 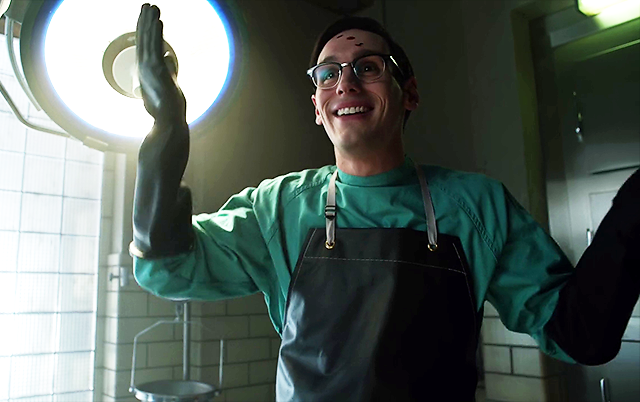 If there was levity within the insanity of The Fearsome Dr. Crane, it came from CMS as Nygma.  Reveling in his oddity, his scene when he is caught performing the unauthorized autopsy is amusing as he tries to bluff his way out of the situation.  However, we get more to Nygma (a character who has taken a greater role) as we see he is capable of doing criminal acts to get his way.  Thus, we see that the future Riddler is slowly emerging.  He also gives us yet another riddle (the more you cut me, the bigger I grow) that shows a mix of comedy and foreshadowing.  However, the scenes between CMS and Chelsea Spack's Kristen Kringle are almost sweet where you think they should be together...even if Nygma is pretty much bonkers.

Zayas gets a little bit of comedy too when he tells Penguin "A bird in the hand is 9/10th of the law", unaware he is mixing his metaphors.  Penguin's unexpected rescue by the church group, while a bit hard to believe (how they saw Oswald if he's covered with leaves) is also oddly funny.  We get a touch more lightness with Gordon's date with Thompkins, where he is unaware that giving her the autopsy files might not lend itself to romance.

Guest star Julian Sands is excellent as Dr. Crane.  It takes great talent to make petting a pig something to cause people to freak out.  Sands keeps a strong mix of elegance and insanity with a love for his son Jonathan.  Thayer's Mullins was also quite good, making us hope she does return to see Bullock outside the case.  Baccarin has improved massively since her weak debut in Rogue's Gallery, making Thompkins a bright and pleasant figure.  Mazouz's role was again brief, but effective in his cold manner with Gordon.

I really enjoyed The Fearsome Dr. Crane.  It had yet another strong mix of police crime drama and the comic-book background that Gotham has pretty much balanced well.  It has great performances from the whole cast (I really can't find one bad performance, not even from the small ones like Mazouz and Camren Bicondova's Selina Kyle, who pops in real quickly to just pop out).  It told a great story, introduced future Batman villains without spoiling them for when the Dark Knight finally rises.  Dr. Crane's escape makes it clear we'll see him again.  So much goes right that the only thing we have to fear is that Gotham will screw it up.

Next Episode: The Scarecrow