The Season Three opening of The Americans wasn't as intense and/or wild as the Season Two premiere, but it still has some wild moments.  EST Men, however, also has surprisingly soft moments within the violence and sex, and surprisingly enough for me not that much on EST.

Stanley Beeman (Noah Emmerich) is trying to rebuild his marriage, especially now that his mole/mistress Nina has been sent to Moscow and convicted of espionage and treason (pretty much dooming her).  With that in mind, he attends an EST meeting as his wife Sandra (Susan Misner) has become deeply involved with it.  He takes his neighbor/friend Philip Jennings (Matthew Rhys), and both find it idiotic.

Philip's wife Elizabeth (Keri Russell) appears to have found something of religion as well, accompanying her daughter Paige (Holly Taylor) to church to  help out at an anti-nuclear rally (these damn liberal churches...thank Heaven I always attended evangelical churches).  Paige's interest in religion displeases Elizabeth, but the pink nature of the congregation pleases her enough to consider the suggestion of the Centre, which wants Paige turned to an agent.  Philip is still stubbornly and fiercely against it, but Elizabeth tells Gabriel (Frank Langella), their former handler whom both are fond of, that Paige is open to Soviet ideas.

Elizabeth and Philip have their own issues, as Agent Gaad (Richard Thomas) comes across Elizabeth after an angry female CIA agent slips her a list of Afghanistan operation members.  In the ensuing fight Elizabeth beats the crap out of Gaad and another agent, but loses the list.  It's decided to use Annelise (Gillian Alexy), who has been sleeping with Pakistan ISI Covert Operative head Yousaf (Rahul Khanna) to get the list.  Annelise has fallen in love with the secular Moslem, but when she tries to tell Yousaf of what she is doing, he becomes paranoid and strangles her.  Enter Philip, who offers to help him out of this most difficult situation.  Philip knows a little about wild sex, having shocked even himself when as 'Clark', he and Martha (Alison Wright) tried out the Kama Sutra.  Unbeknown to the Jennings, Leonid Brezhnev has just dies (setting this in November 1982). 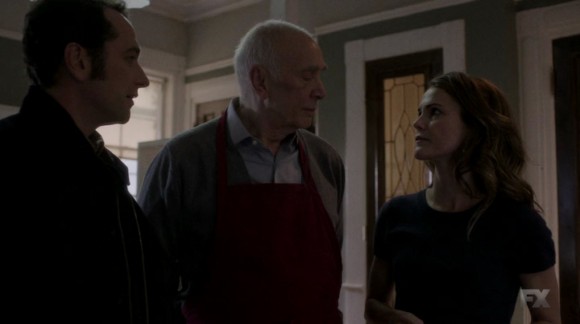 I noticed first that both Costa Ronin (who plays Oleg, the Rezidentura officer who has fallen for Nina), and Thomas are now listed as cast regulars rather than guest stars, which really should have been done earlier.  It does indicate that Oleg and Gaad will play larger roles in The Americans, which is a good thing.  EST Men also has the benefit of having Langella as a guest star, and when you have someone of Langella's stature among the cast, you already have an already strong series become more intriguing.

Langella is excellent as Gabriel, almost a grandfatherly type to the Jennings.  He is calm and pleasant to them, offering them traditional Russian food.  However, he shows through the gentle demeanor a coldness as well, for he quietly pushes them to start Paige on the ways of the Motherland.

Here is where Russell and Rhys really show how strong they are as actors.  With the latter, we can see in his face alone just how angry he is about the mere concept of turning Paige to an agent.  You can tell he is seething as Elizabeth tells Gabriel that their daughter is open to 'new ideas'.  He is infuriated at all this and what appears his inability to get people to see things his way.  Rhys even has a bit of comedy when he appears stunned at the sexual intensity of the Kama Sutra.

For her part, Russell never lets us see whether she truly agrees with Gabriel (whom she is extremely fond of) or is merely playing for time.  Her ambiguity regarding Paige extends to Philip, because as she argues with him about Paige, her words are open to interpretation.  She also gets some real action moments as she takes down Gaad (with Thomas lending some comedy with his bandages, especially as he was taken down by a smaller woman).  Russell also has nice soft moments as she and Paige work at the church, and we see the mother within her as she observes Paige's hesitancy with a young boy at the church.

Elizabeth has just learned that her mother is dying, and here both Russell and Rhys have a brief and quiet moment, and it says so much without saying much.

Other actors both regular and guest featured well.  Emmerich sometimes got stuck with just being either all-work or all-Nina.  However, here his domestic issues with Sandra are a major subplot which doesn't intrude.  We see that Beeman is a man struggling to find love after losing the two women who loved him (or at least that he thinks love him).

Of particular note is Khanna as Yousaf, who is shocked by both his mistress' words and his killing.  We know it is a set-up for future episodes to put Yousaf in cahoots with the KGB, but one wonders what would have happened if either he hadn't killed her there or Philip wasn't around to 'bail him out'.  Then again, Yousaf wouldn't have been in this situation if not for Annalise, and her murder elicited a mix of sadness and horror at her own mix of naivete and stupidity.

It's interesting, though perhaps unintentional, that EST Men has a lot of parallels: Beeman tries EST, Elizabeth tries Christianity, 'Clark' tries Eastern sexual mysticism.  It's as if everyone here, who knows their job and does it well, is searching for something else.

If I had something to criticize about EST Men, it is the somewhat cliché 'strangling mistress at the most opportune time' that didn't strike me as original.  I know it had to be done to get Annalise out of the way and put Yousaf in a vulnerable position, but still...

However, apart from this EST Men had some wild action (Elizabeth's takedown of Gaad is a standout) and the conflict of whether the Paige will turn is a sign that it will be one of the ongoing stories.  We are very interested in seeing how it will play out.

Elizabeth and Philip are a fascinating couple: the parent who wants her progeny to follow her footsteps and has never fully integrated into American society versus the parent who wants his child to follow his/her own path and is more American.  Their parenting styles, their world views are always in conflict, and while they are united in taking down the United States, in the more important things, they have their own Cold War.