When it was released in 1974, Mame, the film version of the hit Broadway musical, met with intense venom.  Lucille Ball, who starred as the title character, was compared by one reviewer to a drag queen.  The reception and financial failure of Mame was so great Lucille Ball never made another film, an inglorious finale to a legendary career (though in retrospect, the reviews/reception for Mame were kinder than those for her final television series, the fiasco known as Life With Lucy).

After having seen the film, I think some of the comments about/against Miss Ball were really over-the-top.  No, Mame is not a good adaptation, which would have required Angela Lansbury to recreate her Tony Award-winning performance.  However, while derision and a certain sadness certainly go well with Mame, it isn't all Lucy's fault.  She bore some responsibility for the shambles that was Mame, but she was also the scapegoat to one lousy decision after another that doomed the film before cameras rolled.

Patrick Dennis has recently been orphaned, and his only living relative is his wildly eccentric aunt, Mame (Ball).  She is a bon vivant extraordinare, living it up at 3 Beekman Place where she has lavish parties because It's Today.  To the horror of Patrick's nanny, Agnes Gooch (Jane Connell) Mame soon starts opening new worlds for Patrick, ones filled with speakeasies and progressive education (one that involve children and adults running stark naked through their school).  This horrifies Patrick's financial trustee, Mr. Babcock (John McGiver), who gets Patrick sent off to boarding school (though as Patrick's only living relative, he cannot remove Mame from all rights).  The Depression hits, wiping Mame out.  While her best friend, actress Vera Charles (Bea Arthur) tries to help, Mame's disastrous run on a preview stage kills Mame's 'comeback'.

However, a fortunate encounter with wealthy Southern beau Beauregard Jackson Pickett Burnside (Robert Preston) reverses her fortunes.  She and Beau fall in love and marry, but alas Mame soon becomes The Widow Burnside.  Patrick (Bruce Davison) by now has grown up and become very WASP-like in his worldview, far from Auntie Mame's free-spirited nature.  He has fallen in love with Gloria Upson (Gloria Cook) as narrow-minded and bigoted a woman as they come.  Eventually, Patrick sees the wisdom of his eccentric aunt, and marries her secretary, Pegeen (Bobbi Jordan), which gives Mame a chance to Open a New Window to her great-nephew.

Bless Lucy for trying, but she was I think a bad choice for Mame from the word 'go'.  First, she isn't a singer.  Ball has a rather low voice to carry a lot of the numbers, and her foghorn voice sounds rather bad for what are suppose to be light-hearted numbers.  Second, yes, she was too old for the part.  She was 63 when she took the part, and no amount of make-up or soft-focus photography can hide that you have a woman in her sixties trying to pass herself off as a woman in at least her forties.

Director Gene Saks, however, made things far worse with some of his other decisions.  Take Arthur, who unlike Lansbury was allowed to recreate her Tony-winning performance for the film version (which is a little odd, given that Arthur was known primarily for television and Lansbury for film yet was considered a bigger film draw).  Maybe the way Arthur played the part on stage the same way that she did in the film, but Arthur and Saks apparently failed to understand what can be acceptable on stage doesn't always translate well to film.  Arthur (who in my view looks more like a drag queen than Ball ever did in Mame) is so wildly exaggerated that it soon takes on almost an air of desperation, as if she were trying to save something that was simply too far gone by being too over-the-top.  Their big duet, Bosom Buddies, was not a lighthearted set of put-downs that I imagine they were meant to be.  Instead, it came across as if the two in real life couldn't stand each other and were just going through the motions to get out of this thing.

Saks had a fixation with trying to make an old-school Hollywood musical, but the end result was a rather stodgy and lifeless.  Again and again every time Saks had an opportunity to breathe life into the numbers, he was determined to make it as stuffy as possible.  The title musical number was choreographed to the film, but it looked too staged, too forced.   Even something like We Need a Little Christmas, where everyone is suppose to be genuinely having a good time despite their hardships, comes across as the opposite.  The number was actually down and slow and even boring, oddly expressing no joy.

About the only one who came across well was Preston, who was a Broadway veteran.  The one number Mame composer Jerry Herman wrote specifically for the film, Loving You, was well-carried, but sadly ruined by Saks' pacing, hopping from one place to another and having no sense of joy. 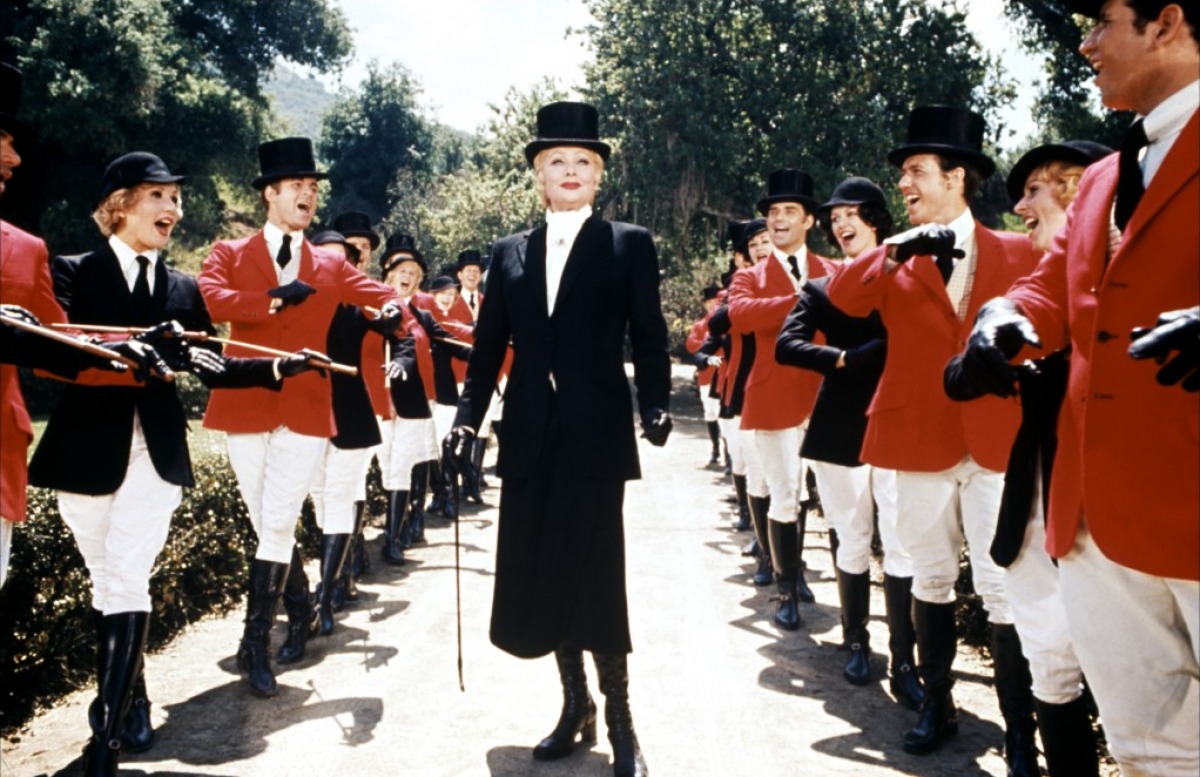 Another point that ruins Mame is pacing.  When Patrick is taken away from Mame, we're suppose to feel great sadness about it.  However, they seemed to be together so briefly that the pathos wasn't there.  Same goes for the number My Best Girl, a duet with young Patrick and Mame after her disastrous stage appearance.  We're suppose to feel great sadness and joy that they have each other.  Yet, I felt nothing.

About the only real part where I laughed was at that disastrous appearance after Arthur sang The Man in the Moon (Is a Lady).  The song simply could have been better (especially if Saks had told Arthur to tone it down), but when we get Ball's physical schtick we do get a sense of what could have been if Ball, not Arthur, had been the one to play it more broad.

The characters proved uninteresting, the story terribly, terribly rushed, and the musical numbers pretty much stodgy and boring (and one of them, If He Walked Into My Life, shockingly unimaginative by being in voice-over).

Mame isn't a terrible, terrible film.  Lucille Ball did her best and if nothing else is on it could be an interesting diversion.  However, the tone (in turns broad and serious), the staging, the performances, the pacing, all conspired to turn what should have been a lighthearted romp into almost a funereal spectacle.  Lucy, Mame, and the audience all deserve better.