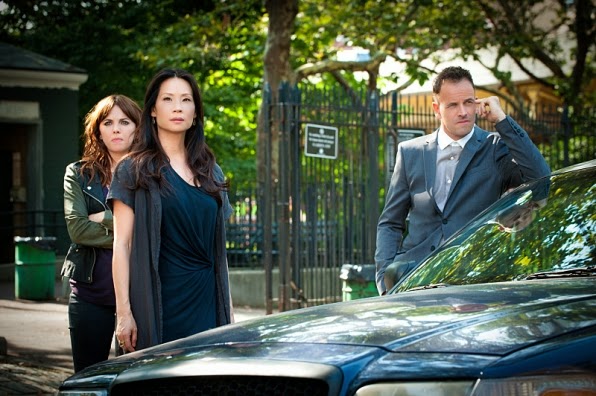 Two men are killed in separate locations but there are ties between them.  Victim One: Theodore Fordham was the lawyer for Victim Two: Elias Openshaw.  Openshaw had owned a toy company that produced Pipz, toy beads that contained GHB, a bit like a drug that caused overdoses in nine children with four dead.  Joan Watson (Lucy Liu) wants to keep the two investigations separate, her hostility to her former partner still raw.  One of the victim's parents, Gabe Coleman (Zak Orth), at first denies then confesses to the crimes.  Sherlock Holmes (Jonny Lee Miller), however, will not believe his confession.  On the contrary, he says.  Holmes knows Gabe didn't do it.

To find out more about this case, Holmes and his protégé Kitty (Olivia Lovibond) go see Assistant District Attorney Angela White (Sonya Walger) (and as a side note, last I saw her was in The Librarian: Quest for the Spear...thought her name sounded familiar).  She is an ambitious ADA aiming for a Congressional run, and with Openshaw's death her biggest case can be closed.  Openshaw you see had disappeared before being brought to trial, and while White didn't get Openshaw she did keep the case going.  Kitty, seeing the rapport between Holmes and Watson, soon begins sabotaging the interview with White, leading her to abruptly end the interview.

Holmes can't figure this out, and neither can Watson.  Watson has issues with how hostile Kitty is, and Kitty doesn't win fans with Detective Marcus Bell (Jon Michael Hill).  However, as the case progresses, we get some twists. 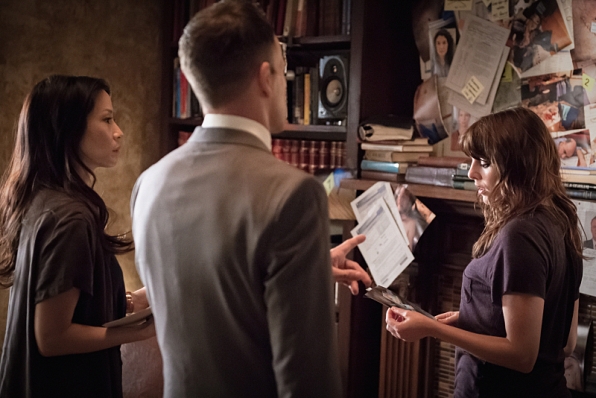 First, we get a witness putting White and Openshaw together.  This can't be the case since White maintained she could never find Openshaw.  However, the witness, Mr. Azim (Shayan Shojaee) is proven correct.  The lawyer Fordham had been blackmailing White to keep the ADA's political ambitions alive but without endangering his client.

However, she didn't kill him.  Who did?  Well, an Agent Bowden (Chris McGarry) specifically asked to be part of the Openshaw case, and as it turns out, he has a sideline...selling GHB.  The poisoned Pipz, which could be sold to users and suppliers, had been locked away, and after Openshaw's death, with the investigation moot, they would have been discarded.

I can't say that this case was particularly overwhelming.  Maybe I missed Agent Bowden but I wasn't sure where he came from.  As the episode is deleted I can't go back to rewatch it.

However, we do have a better insight into Kitty, and I think that was one of the positives of The Five Orange Pipz.  She was very jealous of the easy rapport between Holmes and Watson, and how well they played against each other.    As Holmes makes clear, Kitty is not his partner, but his protégé. He thinks this of everyone I think, so it isn't too strange.

Miller had great moments in the episode.  "I never guess.  It's a shocking habit, destructive to the logical faculty.  We observe and then we deduce".  All versions of Holmes couldn't have put it better I think.

The Five Orange Pipz also had good editing between the White interrogation and Kitty's observing from behind the glass, part of the investigation but also apart from it.  We got a stronger sense of who she is (a crime victim herself, but one who wants to move beyond that).  Lovibond also has great moments when she basically tells Holmes she's bored.

I wasn't overwhelmed with this Elementary episode, but I didn't think it awful either.

Next Episode: Just a Regular Irregular
Posted by Rick at 3:00 PM