Elementary: Enough Nemesis To Go Around 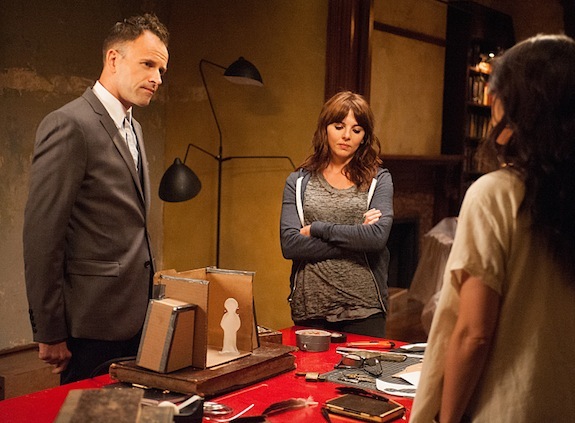 ELEMENTARY: ENOUGH NEMESIS TO GO AROUND

You CAN Go Holmes Again...

It's been a while since I've been to Elementary, the CBS Sherlock Holmes television show.  It's not that I haven't wanted to, but school and the Academy Awards got in the way.  Now, however, I think it is time go back a bit and see if I can get through the third season.

When last we left Elementary, Sherlock Holmes and Dr. Joan Watson had broken up, sort of.   Watson wanted a room of her own so to speak, and Holmes, finding both his partner in crime-solving and his brother Mycroft moving away, agrees to work for MI6.  Now, it's been six months since those events.

Watson (Lucy Liu) has done quite well for herself.  An investigator in her own right of some renown, she is instrumental in taking down Elana Marsh (Gina Gershon), a drug queenpin whom she and the NYPD have been investigating all this time.  Elana is not one to forget or forgive.  It just so happens that as Karen (Kate Lutz) the star witness against Elana is about to go testify, she and her bodyguard gets killed...inside a moving elevator...which had no stops.

Two months after this murder Watson is still stubbornly frustrated by both the murder investigation and Elana's escape from justice.  In fact, Elana now has a beef against Joan, accusing her of stalking (and to a point she is correct).  Captain Gregson (Aidan Quinn) suggests caution, and Detective Bell (Jon Michael Hill) helps however he can.  About the only bright spot in Joan's life is Andrew Natal (Raza Jaffrey), her neighbor's brother whom she has started a relationship with.

An odd tip from a 'Montcliffe Ekuban' triggers Joan's memory, and she goes to the brownstone, where she discovers Sherlock Holmes (Jonny Lee Miller).  He's back, trying to apologize in his own way, but she wants nothing to do with him.  Neither does Captain Gregson, but he agrees to let Sherlock return as a consultant...with the proviso that Joan sign off on this.  Holmes, however, is not alone.

He has a new protégé, Kitty Winter (Ophelia Lovibond), a girl who has a chip on her shoulder and who so far isn't as shrewd or patient as Watson was.  Kitty has a barely concealed hostility to Joan, but while Sherlock isn't pleased by some of her mistakes, he believes Kitty can be molded well.  He sees himself as a mentor, a teacher, and this is what led him to panic when Joan left.

Now, back to the crime.  Despite her protests Sherlock gets himself involved in solving the crime, and he is able to do so, by observing some of the details that Joan missed. Even Kitty helps out by pointing out things that don't hold up to her.  We now have the hitman and said hitman is the tie that brings Elana to justice.  As for why Holmes is back, he tells Joan, "Isn't it obvious?  I belong here, as you do?"

Enough Nemesis to Go Around has Elementary's signature balance of odd crime and character development.  What I really thought the episode did well was show in brief bits both how far Joan has grown as a detective and woman but also show that despite her own brilliance, she is not on the same level as Sherlock Holmes yet.  We saw this in how in her own bits of investigating, she put things together really quickly.  Liu also had a great scene when she finally meets Kitty (whom she at first thinks is working for Elana).  Both break out the single-sticks, and their fight is both strong and amusing.

It's here though, that Joan realizes that Kitty isn't working for Elana but for Sherlock.

We also see how Joan's relationship with Andrew has come along, skipping straight from the first meeting to a solid romance.  For full disclosure, at this moment I've seen only three episodes, so I don't know how far the relationship will go (though I got indications of where it will ultimately end), but I'm interested to see how it comes along and how things are handled. 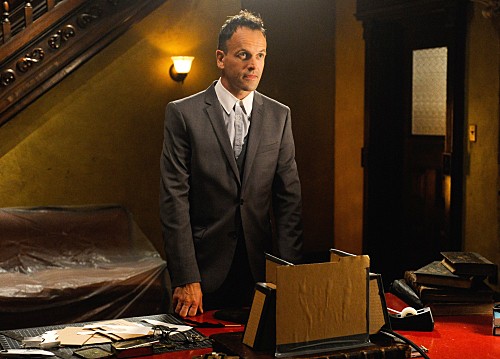 I thought that Holmes' return was handled extremely well.  We get a bit of wacky comedy (he's in an oxygen mask!) but we see that those around him aren't welcoming him with open arms and big smiles.  Far from it, Joan is quite clear where she stands.  "I didn't need you anymore," she tells him, quoting from the five-sentence long farewell note he left her.  Gregson for his part tells Holmes he isn't his friend, stating it was always a working relationship (though I suspect the good captain is lying, either to him or himself).  "It was a difficult time.  I was thinking of no one but myself," Holmes tells Captain Gregson. "Must have been a day that ended in 'Y'," Gregson retorts.

Miller for his part brings something we don't see in many interpretations of Holmes: a genuine sense of vulnerability and regret.  He is fully aware that his actions have angered and upset people, and in his own clumsy but still somewhat narcissistic way he is trying to make amends and get into their good graces.  The best way of course is to show he still has great skills, and here Miller shows the intelligence of Holmes by working out a solution to the problem.  Like a lot of Elementary, the actual solution is a little grandiose, but we forgive that because these kinds of 'locked room' murders can be tricky.

We also get two good guest stars.  Gershon revels in being evil and controlling, almost always one step ahead of everyone.  Lovibond (as a side note, both the actress and character's name make me think of a Bond Girl) is appropriately standoffish as Kitty.  She is barely starting out, so I think she will grow in importance as a wedge between Holmes and Watson.  Her scenes with JLM are some of my favorites.

Holmes is incensed that Kitty pursued unauthorized surveillance of his former partner.  When Kitty says she wants to know what Watson has that she doesn't, he replies "What she has is two years of training, two years of doing exactly what I said."  When she apologizes, he tells her, "Don't be sorry.  Be better."

Words to live by I think.

Enough Nemesis to Go Around I think is a pretty strong start to the season.  We got a strange case, a wicked villain, and strong interplay between three characters who will be colliding throughout the season.

Next Episode: The Five Orange Pipz