Gotham: What the Little Bird Told Him Review 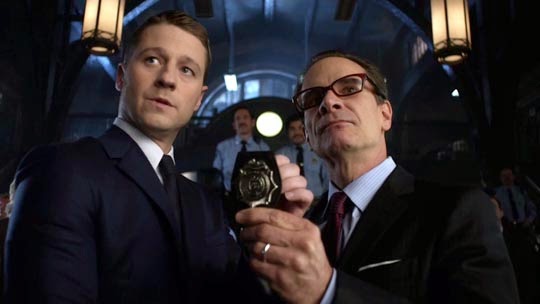 GOTHAM: WHAT THE LITTLE BIRD TOLD HIM

You just can't keep a good man down.  Then again, you have to ask what you are keeping him down from.  When it comes to Detective James Gordon (Ben McKenzie) it means the always upright police officer will speak truth to power and follow the letter of the law.  When it comes to Oswald Cobblepot aka The Penguin (Robin Lord Taylor), it means staying one step ahead of everyone in his determination to come out on top.  What the Little Bird Told Him is shocking, brilliant, and does what Gotham needed done: maintain the balance between gritty noir detective story and a comic-book based series.

Jack Gruber (Christopher Heyerdahl), recent Arkham Asylum escapee, is on a crime rampage, enacting revenge on those who betrayed him.  His method of killing has earned him the press nickname of The Electrocutioner.  The Gotham City Police Department has been told the capture of The Electrocutioner is their top priority.  Enter Gordon, who promises he can get him within 24 hours...in exchange for restoring him to the GCPD and out of Arkham Asylum security.  His ever reluctant partner Harvey Bullock (Donal Logue) goes along with this, much to his displeasure.  Also unhappy is Police Commissioner Loeb (Peter Scolari), who blames Gordon for everything. The criminal underworld has its own problems, though Gruber does tie into all this.  Fish Mooney (Jada Pinkett Smith) has decided this is the time to make her play to overthrow Don Carmine Falcone (John Doman), and for that she'll use Liza (Mackenzie Leigh), the girl the Don has a soft spot for due to her resemblance to his mother.  Fish 'abducts' Liza, threatening her unless the Don retires and turns over control to her.  The Don, devastated that his favorite 'civilian' has been taken, reluctantly agrees.  Carmine's rival, Don Maroni (David Zayas) finds himself targeted by Gruber, as he was the one who sold him out.  The attack literally shocks Oswald Cobblepot, also known as The Penguin (Robin Lord Taylor).  In his confusion, Penguin lets out that he had to do something for Don Falcone!

Since Maroni is the target, Gordon hits on the idea of taking him to the precinct under protective custody.  True to form, Gruber strikes, shocking everyone in the building...except for Gordon, who opted to use the rubber boots Forensics Edward Nygma (Cory Michael Smith) offered.  His defeat of The Electrocutioner is shockingly simple, and Gordon is restored.

Penguin does manage to get to Falcone to tell him Liza has been a plant for Mooney all along.  Falcone doesn't want to believe it, but at Fish's club he confirms it to himself and strangles poor Liza.  Quietly enraged, he takes Fish and her loyal henchman Butch (Drew Powell), deciding they need special treatment.  Enter Penguin, who is delighted by the turn of events, greeting his rival with a gleefully evil, "Hello...FISH!"

What the Little Bird Told Him has one or two flaws.  I know a lot of people have an issue with how Gruber was defeated (with a literal cup of water), but I think it works.  It plays against the idea of having to have a massive battle with a super-villain.  It also shows that Gordon is highly intelligent.  I also have a problem with the 'revealing incriminating information while in shock' motif that has been seen before.

However, those really are minor points to me, as What the Little Bird Told Him has some simply shocking moments (no pun intended).  Of particular note is when Don Falcone strangles Liza.  I think this does take viewers by total surprise, as we have not seen the Don so violent.  He's come across as dangerous but also calm and rational.  His killing of Liza, whom he genuinely cared for, was cold and brutal, so shocking that even Fish shuddered at it.  We can see Falcone was genuinely heartbroken at this betrayal, not just by Liza but by Fish, that heartbreak mixing with rage that Fish would use his mother's memory against him.  We saw glimpses of Falcone being more than just a nice old man when he mixes the memory of his father's funeral with the killing of someone begging for his life.  Dorman gives a really strong and powerful performance, and I think it's one of his best of Gotham.

We also get to see CMS have a much larger role in Gotham; he serves to help Gordon and Bullock by offering protection, and we also see an interesting subplot develop as he attempts in his own way to woo GCPD Records staff Kristin Kringle (Chelsea Spack).  Nygma presents Kringle with the oddest gift: a cupcake with a bullet in it.  This gift creeps Kringle out, but once we get the resolution to Nygma's 'riddle' (a live bullet in a cupcake and a beautiful woman is a dangerous thing), it's almost sweet.  Almost.   It's nice to see CMS taking a larger role, and this subplot actually works in Gotham, since CMS gives Nygma a mix of odd but still not totally irredeemable.  We know he will become The Riddler, one of Batman's greatest foes (and a personal favorite), so I figure that his passion for riddles will make his identity to the GCPD not a secret whatsoever.  Still, so far the ride has been extremely fun.

I know JPS gets much grief for making Fish into a cartoonish figure, but here again she really used it well.  When her carefully-conceived plan crumbles rapidly, we see genuine panic and then silent rage to see her toadie come to gloat over his triumph over his hated rival.

Almost everything in What the Little Bird Told Him works.  There's the opening of the episode to an appropriate use of Johnny Cash's God's Gonna Cut You Down (which works on so many levels) and the wild twists with the unfortunate Liza; there's the introduction of a romance between Gordon and Dr. Leslie Thompkins (Monica Baccarin) (which has the plus of pushing Barbara out to deal with her WASPy parents), and the super-villain Gruber, keeping within the world of Gotham and comic-book adaptations.  The always amazing performance of Robin Lord Taylor (who really needs to WIN the Outstanding Supporting Actor in a Drama Emmy) is complimented by everyone, in particular Dorman and Logue (who makes Bullock less the corrupt sleazy cop and more the reluctant hero).

Again, minus that 'revealing vital information in throes of shock, What the Little Told Him has to be among Gotham's wildest and most intense hour, building on what came before and building to more fascinating and tense stories.

Next Episode: Welcome Back, Jim Gordon