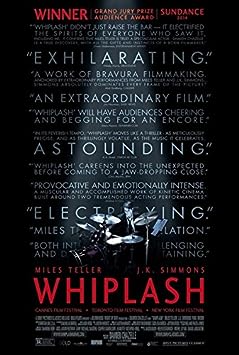 A Journey Into Sound...

Whiplash's Best Picture nomination I think was perhaps the most shocking of all the titles announced.  It was an extremely small film, so small that the screenplay went from Original to Adapted in circumstances that can be best described as a bit nutty.  It got five Academy Award nominations, the same number as the behemoth Interstellar and the (in my view) overrated The Theory of Everything.  However, in many ways, Whiplash is simply better, achieving what the other two films attempted to do.  It presented a stunning portrait of a (fictional) genius that delved within his own mind and soul, and it was an intense thrill-ride that kept you on the edge of your seat until the very end.

Andrew Neiman (Miles Teller) is a talented jazz drummer whose passion for music comes from within as his family has no musical background or particular interest.  He is a first year student at a prestigious music academy where he has to sit and wait and watch.  When we open, Andrew's practice catches the attention and ear of Terrance Fletcher (J.K. Simmons).  He's openly feared by everyone at the school, even by other teachers, but they all recognize Fletcher's extraordinary musical gifts.  To the surprise of everyone, Fletcher asks Andrew to join Fletcher's advanced class, which performs for major competitions.

From this point, Whiplash becomes a battle between the determined Andrew and the uber-tyrannical Fletcher.  The music maestro is a monster: bullying, terrifying, Fletcher at one point throws a chair at his musicians and makes another cry when he torments him into making him wonder if that student was out of tune.  As it turns out in this intense moment, the student wasn't out of tune, but no matter to Fletcher: the student couldn't tell the difference, so he should be out anyway.

Fletcher keeps playing hot and cold with Andrew (as he does with all the students).  Sometimes it seems he's pushing Andrew to go to the very limits of his talents.  Other times, he's just a complete ass to him.  The pressure Andrew is put through is intense, so intense that in another intensely dramatic moment, not even being in a car accident can keep him from the stage.  He plays, but his injuries are so great that Fletcher, perhaps gleefully, throws him out.  In his drive to be the very best, Andrew dumps his girlfriend Nicole (Melissa Benoist), a popcorn girl he met when he and his father would go see classic films in an arthouse theater.

It all becomes too much for Andrew, who agrees to help the school administration get rid of Fletcher.  Andrew also has pretty much given up on his dreams, pleasing his father Jim (Paul Reiser).  Andrew sees that Fletcher is playing at a club, and a seemingly repentant Fletcher asks Andrew to join him on stage for a performance with his own band.  Of course, things don't turn out exactly the way you think they will.  The final concert gives us one wild and unexpected twist after another, until, to quote Highlander, 'there can be only one'.

Question is, "Which one?" For that, you'll have to watch Whiplash.

This is one of the brilliant things about Whiplash: how it keeps turning things on you again and again.  Writer/director Damien Chazelle goes a way you expect a film to go, then throws a curveball that is logical and changes the game, then goes another way that is also logical and changes the game, and again and again.  It simply does not let up.  As a result, the film adopts its own flow that becomes an intense and thrilling ride.

I do not that I have used 'intense' a lot in my review of Whiplash, but it is fitting because the film just has an amazing grip and power that doesn't let up.  It is due to a lot of factors.  Certainly Chazelle's screenplay and direction are a major part of it, as he never lets up on taking things one way then zipping us into another and another twist that come at us fast and furious.

However, at the heart of Whiplash are the performances.  Simmons has gotten the lion's share of attention, and rightly so.  His Fletcher reminded me a bit of John Houseman's Professor Kingsfield in The Paper Chase. Both were brilliant but tyrannical teachers who lorded their power over everyone.  However, while Houseman's Kingsfield was patrician and intellectual, using his mind and words to cut his law students, Fletcher was volatile, violent, and brilliant, using threats and abuse to push people.  Perhaps in his own way Fletcher really wanted to push his students to the very edge to be the very best.  However, in a lot of ways the man was a sadist, arrogant and unafraid because he felt untouchable.

Simmons' Fletcher was cutting and cruel, mocking Andrew's dead mother in front of the class and making the three drummers he was playing off against each other play until three in the morning (keeping the other students waiting) until Fletcher was satisfied they got the rhythm down to Fletcher's exacting measure.  "You give a calculator to a retard and he's going to try to turn the TV on with it," he tells the original lead drummer when Fletcher berates him for letting Andrew lose his sheets (though I don't think the film openly states this, I think Fletcher stole the music while it was left unguarded despite Fletcher's strict instructions to never let the music out of your sight).  Andrew isn't punished for this because guarding the other musician's score wasn't Andrew's responsibility.

As a side note, Fletcher reminds me of a professor I had a few semesters ago.   He never threw a chair at me (which frankly would have caused the professor to be fired), but while seemingly nice his class was such a nightmare I did on occasion cry.

However, I think Miles Teller, one of our best young actors, needs praise as well. Andrew is no innocent: he pushes himself to a frenzy because he wants to be among the very best.  He dumps his girlfriend because of his single-minded devotion. At a family dinner, he won't take the arrogance of those at the table who think his pursuit of brilliance is a waste of time.  He doesn't think much of the jocks at the table bragging about their football prowess, pointing out they are at a lower division... "Come play with us," one of them taunts.  "Four words you'll never hear from the NFL," Andrew retorts.

In his quiet way, father Jim says, "Live From Lincoln Center", making it clear what he thinks of Andrew's behavior.  Teller as Andrew pushes him to insane levels, and he too never lets up.  It's a brilliant performance to match Simmons' Academy Award-winning one.*

Reiser, whom we haven't seen in a while, has a smaller, less showy role, but he shows his range in the role of the quiet and understanding father who just doesn't get his son's passion for music.

Whiplash is a really intense ride almost from the get-go.  A brilliant film that will keep you thrilled to the very end.  I'm sounding the drum for a great achievement by everyone who worked on Whiplash.

*Yes, as of today J.K. Simmons hasn't actually won the Best Supporting Oscar, but I'll be frank: it's practically in the bag.  Should he actually lose, I'll change it.