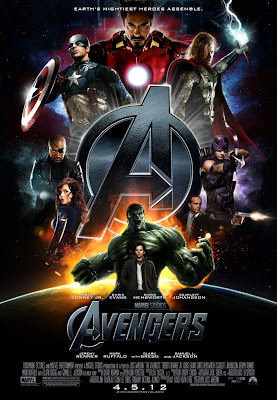 Vengeance Is A Marvel...

The summer of 2012 has officially begun.  The seasons aren't measured by the days on the calendar but by the films released.  The Avengers is the event film, heavily-hyped and promoted as this epoch-changing event.  Certainly it has much going for it: a cavalcade of comic book heroes all in one film, making it the Grand Hotel of graphic novel adaptations.

I would have gotten around to have seen it, but allow me a moment for indulging in some personal history.   The Avengers is not the type of film I would have to see opening weekend, not late at night, and certainly not in 3-D.  However, in my hopes of being more social, this was the screening my friends wanted to see, so I opted to go along with it.  The Avengers is a good movie, but not a great movie, one that does its job well but also has the same flaws that the Marvel Comic adaptations carry.

It helps to have seen all the other Marvel Comic films, which you can call prequels to The Avengers, since that fills in a lot of the blanks if you go into this film cold.  The villain Loki (Tom Hiddleston) from Thor has come back to Earth to get the Tesseract, a powerful object that allows for travel between galaxies and thus bring an army to conquer Earth (why other beings always want to conquer our little planet is beyond me, but I digress).  In short order, he takes over the minds of Agent Barton (Jeremy Renner) and scientist Erik Selvig (Stellan Skarsgard) and destroys S.H.I.E.L.D.'s headquarters.  Now S.H.I.E.L.D. head Nick Fury (Samuel L. Jackson) activates the Avengers Initiative.

What is the Avengers Initiative?  Namely to gather the world's greatest superheroes into one to face extraordinary threats.  First is Natasha Romanoff, better known as Black Widow (Scarlett Johansson), last seen in Iron-Man 2.   She quickly disposes of those holding her prisoner and goes to India, where she gets Dr. Bruce Banner (Mark Ruffalo), who has managed to keep his alter ego of the Hulk under control (I should mention that the Hulk has made two movies, Hulk and The Incredible Hulk, and that he is the third actor to play the part after Eric Bana and Edward Norton respectively).  Meanwhile, Agent Coulson (Gregg Clark), who has popped up in all the Marvel films, gets egomaniac billionaire Tony Stark (Robert Downey, Jr.) aka Iron-Man with a little help from Stark's assistant/girlfriend Pepper Potts (Gwyneth Paltrow).  Finally, we get Captain America (Chris Evans), still coming to terms with the fact that the world he knew (the 1940s) is long dead.

Now with our team (minus Thor himself, who can't be found) put together, we get the mission.  Loki isn't idle, attacking a group of Germans which draws the firepower of this group.  In short order Loki's captured, but in only the way films work, no one (save one, Captain America) thinks it's all too easy.  Sadly, once Loki's been captured, it's at this point that Thor (Chris Hemsworth) decides to pop up to take care of his crazy brother himself.  A fight then ensues between Thor, Iron-Man, and Captain America.  Eventually they stop and work together to get Loki back to the air battleship.

Soon, the superheroes star fighting among themselves: Captain America, the loyal soldier, dislikes Tony Stark's ego and disregard for rules, Thor holds these humans in contempt, Banner doesn't want to get angry because you wouldn't like him when he's angry, and all of them are angry about the government attempting to use the Tesseract for weapons of mass destruction.  In all this, Loki's scheme unfolds: he wanted to be captured (now there's a shock), with Barton, aka Hawkeye--a sharpshooter with bow and arrow, leading the rescue and the destruction of both the ship and the group.  The group splits up to fight: Cap and Tony in one group, Thor fighting the Hulk to try to control him, and Black Widow facing her old friend Hawkeye.

Eventually the Hulk and Thor find themselves off the ship, Captain America and Iron-Man save the ship, Black Widow removes Hawkeye's mind control, but Agent Coulson meets his death through Loki.  Fury shames them to realize that Coulson had faith in them and the Avengers Initiative, they unite to stop Loki and the alien invasion in an epic battle on the streets of Manhattan.  The most important thing is to destroy the Tesseract's link to other worlds, which will take all their efforts.

We end The Avengers with those hints of more films, with a mysterious figure, known as Thanos, plotting another attack.

Here is where The Avengers doesn't go beyond anything we've seen before.  When Iron-Man 2 ended, we got a scene of Agent Coulson looking at what I later found out was Thor's Hammer (which from what I understand is common knowledge: EVERYONE knows what Thor's Hammer is).  Therefore, EVERYONE should know who Thanos is.  All the Marvel films have the same problem for me: they are not made for those of us who never read comic books.  It's great for the super-fans (the real MegaNerds) who know the characters and can fill one in on what's going on.  However, they also achieve the effect of keeping many of us at a distance.  We should know there will always be a scene that lets us in for another Marvel film (as if Fury saying something along the lines that "if" there should be need for them again...IF?!), but some of us don't know the characters apart from the films.

Thanos was and how when they talk about 'courting Death', they meant a literal character named Death with whom Thanos is in love with and who can only be pleased by destroying or conquering worlds (reducing all this to a lovelorn guy trying to impress a girl by committing genocide).  That's all well and good, but how is someone suppose to know all that minutia?  An audience should not be expected to fill in all that information or go into a film knowing all that.  Our information should come from what's on the screen.

This is why when I watch an adaptation I don't judge it on how close or far it stays to the source.  I know there will be differences between book and movie, but it is not fair to expect audiences to know all this information before going in.  That is the problem I have had with all the Marvel films, and writer/director Joss Whedon (a cult leader to MegaNerds via his television programs Buffy and Firefly) sticks pretty close to the other films.

I digress to compare The Avengers to Superman.  In the latter, they took the time to give us his whole backstory so we would know who Clark Kent/Superman is.  In the former, it's impossible to say whether you would need to have seen both Iron-Man films, Thor, both Hulk films, and Captain America (helpfully subtitled The First Avenger) to follow The Avengers, but I'll say it helps.  For example, if you haven't seen any of them, one wouldn't really know who Agent Coulson or Nick Fury are.  Given that both Black Widow and Hawkeye came out as secondary characters in Iron-Man and Thor respectively (with Hawkeye as only a cameo),  you won't be completely lost but you might not quite get things.

There are positives in The Avengers.  Whedon should be congratulated in being able to build up the team in a steady and logical manner.  In this grand film there is a great danger of not allowing each character (and actor) to be short-shifted, not given enough time.  However, Whedon has kept a delicate balancing act, allowing each of this major cast their moment.

With the established characters coming from their own films, each really stays close to character.  Downey, Jr. has Tony Stark so down pat all one has to do is give him the lines and he can take it from there.  Evans (still the weakest in terms of actor) is acceptable as Captain America, loyal soldier (although I get the sense that the end of The Avengers, in particular a female who escaped the epic battle, will be his love interest in Captain America 2--you don't give them glances and give her a prominent role without a reason).  Hemsworth continues to be the stentorian and grand Norseman, given to grand pronouncements (and given that Asgardians tend to wax eloquent, we can accept their grand speech mannerisms).  As the other Norse deity, Hiddleston manages to give those overblown speeches about his own power without slipping into camp or parody (though it comes close).  When he's taken down by the Hulk as he's about to spout off about his own genius, the audience cheers.  It's nice to see such a blowhard get taken down.

In particular, Ruffalo has done the best job of giving the best performance.  He plays Banner as insecure, almost frightened, meek, unwilling to get angry.  Of the film Hulks, Ruffalo will be the best.  Johansson has grown as an actress, and her Black Widow is not eye-candy but a strong woman fully in charge of things.

A side note: when she faces off against Loki, there was a suggestion of Silence of the Lambs with Johansson taking the Jodie Foster part and Hiddleston as Anthony Hopkins.  The interrogation, right down to how they face each other across strong glass, was evocative of Silence of the Lambs, but I cannot say whether it was intentional or not.

Renner is just an actor one enjoys watching, even though he was not given a large part since he was brainwashed early on.  Curiously, this is one of the problems I had with The Avengers: the conversion of Hawkeye and Professor Selvig was done quite quickly: just a touch and he was Loki's.  One would have thought all Loki had to do was go to the President and take his mind and world conquest complete, Avengers Initiative be damned.

I also think Alan Silvestri's score, while not awful, was a bit too much to take at times.  Finally, I wonder whether Whedon couldn't have cut things down a bit.  You have three major action scenes (beginning, middle, and end).  Maybe two would have done well enough.

On the whole The Avengers is a good film.  It has done its job: it's entertaining, it has some good performances, and it is both the culmination of the previous trailers (aka the other Marvel films) and the launching-off point for other Marvel-based films (including I imagine The Avengers 2, certainly Captain America 2--can't shake the idea the girl will be in it).  What The Avengers isn't is a great film, one that will change how comic book adaptations will be made or the standard to which other comic book-based films will be measured.

Finally, I end with this.  Not being a comic book reader but having some knowledge, I am curious.  What exactly is the difference between this guy...

I know they are different companies (Marvel and DC), but other than that, aren't they really two sides of the same coin?  Besides, aren't they just derivative of this guy... 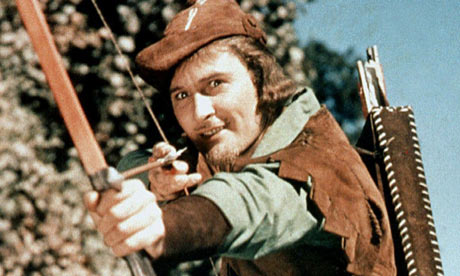