Being Elmo: A Puppeteer's Journey. A Review 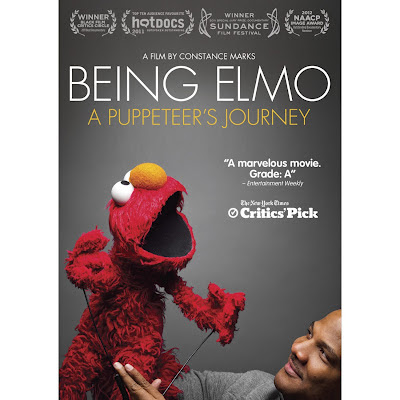 BEING ELMO: A PUPPETEER'S JOURNEY

Elmo is a monster.  People forget that.  He's a cuddly, sweet, even daresay adorable monster, but he's a monster nonetheless.  Still, when we see him, all sweet and child-like, who can resist that face?  Elmo has become a beloved figure beyond Sesame Street.  He is at least to my mind the only Sesame Street character to have his own spin-off show/segment (Elmo's World).  The Tickle-Me-Elmo doll created a frenzy, with parents in fights to get their hands on the giggling little toy (and I suspect making the adults think of Elmo AS a monster, but I digress).  Being Elmo: A Puppeteer's Journey, goes behind (or should I perhaps say, beneath) the iconic character to get the story of the man who gives Elmo voice and movement: Kevin Clash.

Mr. Clash's story is an extraordinary and fascinating one.  He grew up in the poor side of Baltimore, no different from any other young black child in his neighborhood.  That is, until he caught sight of the Muppets on Sesame Street.  He became fascinated, not just by the characters (like me, his favorite was Grover), but in how they came to life.  HOW did they bring them to life?  How did they manage to not show the stitching needed to create them?  Where did they get the materials to create the Muppets?

In short, Clash wasn't just enchanted by the Jim Henson's magic, but in Henson's methods.  Clash was so inspired he began to pursue puppeteering.  He read up on the Jim Henson workshop creators like some read sports or fan magazines.  He learned to sew (a most curious activity for a young black man), and he learned the craft of bringing the creations that came from his mind to life.  Eventually, his study of the art of puppetry and persistence in working at his dream to join this company reaped rewards.  Kermit Love, the avuncular Santa Claus-like puppeteer, was contacted by Mr. and Mrs. Clash and soon the elder Love took Clash under his wing, serving as a mentor and friend.

Being Elmo goes into how Clash, both a lover of Love and Henson's work, found himself working alongside his idols, soon joining the hallowed ranks of Sesame Street puppeteers.  The poor black kid from Baltimore now found himself being part of the magic he so loved.

Eventually, we learn how he and his most popular creation came to meet.  Richard Hunt, another respected Muppeteer, did not like the furry red monster he was given, making him an almost caveman type.  Frustrated, he tossed the puppet at Clash (literally dropping him on his lap), telling him to find something with it.  Soon, the perfect marriage of man and Muppet came to be.

The fame that Elmo brought Clash was unexpected and surprising to him, but not without certain sacrifices.  Although Clash had a daughter of his own, he found himself spending more time with other children than his own, leading to a divorce.  The love Clash has for his daughter is evident, as is his puzzlement over the popularity of Tickle-Me-Elmo (he points out that since Elmo never refers to himself in the first person, he figured it would have been simply "Tickle Elmo").  He also reflects on how the sudden passing of Jim Henson and his memorial service affected him, and we now see the Kevin Clash, once the starry-eyed boy who grew up admiring the Muppeteers, is now himself seen as both an icon and a mentor.  In Being Elmo, we see him inviting a child who like himself, makes puppets.  Clash gives him a tour, and we see that the wheel has turned...

Being Elmo is a great example of not just the uniquely American creation known as the Muppets (which like almost all things American, are adapted and adopted by the world, Clash helping choreograph the French version of Sesame Street), but also about how persistence and diligence and hard work is rewarded.  Clash is the embodiment of the American Dream, a Horatio Alger story come to life.  Clash did not permit the naysayers to get in the way of his goals and passion to create.  He gave no quarter to those who thought his puppet-making was odd at best (especially for an African-American).  Instead, he kept pursuing with a combination of work and study that which so fascinated him until he found himself at the forefront of his chosen profession, having the privilege of working with his idols and in turn becoming an idol to the generation following him.

We also see that behind the cuddly puppet is a man equally pleasant and endearing.  Being Elmo doesn't exactly shy away from the negative aspect that Clash's fame and career have had on his private life (although the fact that he divorced and the effect his fame, and Elmo's, has caused for his home life) is barely hinted at.  One has to draw from the context clues the film gives us to see that Elmo has an alter ego whose life hasn't been all lemon drops and sunshine.

Still, what we see in Being Elmo is a man driven by his love to create, who was persistent in improving in a craft and was rewarded for it, who did not allow unimportant things such as background, race, or economic level to dictate what his life, career, and passion would be, and who is a genuinely sweet and pleasant person.  We see that there is an art and skill to manipulate the Muppets, not just a matter of putting your hands up a puppet.  Clash worked hard to get to where he is, and now he is being rewarded in ways that go beyond fame and fortune.

Being Elmo is short and sweet (not unlike Elmo himself).  The portrait we get of the man under the monster is of a good man, who decided to follow his passion and was inspired and who in turn became an inspiration.