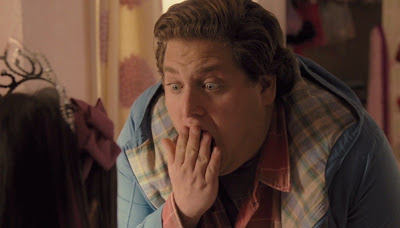 Noah (OSCAR NOMINEE Jonah Hill) is your typical slacker with a brain (allegedly), a guy who doesn't seem interested in nothing except getting some and possibly a rare astronomical sight.  One night, his mom (Jessica Hecht) is going to attend a lavish benefit but might have to cancel (and thus lose a chance to meet someone) because someone else's sitter cancelled.  Enter Noah.

His charges are in short: a loon, a bitch, and a psycho.  There's Slater (Max Records), who suffers from a host of anxiety issues.  There's Blithe (Landry Bender), a little girl obsessed with being a celebrity and going to the coolest clubs (even if she is about 6).  There's Rodrigo (Kevin Rodriguez), a recent adoptee who loves to blow things up.

We get the set-up real quick: Noah expects them to behave but obviously they are going to create chaos for him.  If that weren't enough, Noah's "friends with benefits" Marisa (Ari Grayson) wants him to bring some cocaine in exchange for actual sex.  Noah being Noah, he puts the kids in the minivan and goes straight into Manhattan.

While picking up drugs, he encounters drug kingpin Karl (Sam Rockwell).  To get more complications into the plot, Rodrigo takes an egg filled with cocaine, which breaks.  Now Noah has to get $10,000 to pay off the drug debt.  Crashing a bat mitzvah where girls throw themselves at Slater but he appears insecure about it doesn't work. Asking Noah's wealthy diamond dealer dad doesn't work.  Breaking into Noah's father's diamond shop almost works, but corrupt cops take it.

In all this the minivan is stolen and recovered, Karl is dealt with thanks to some thugs Noah made amends to, and Noah passes on some words of wisdom: helping Slater accept his homosexuality, Blithe to not grow up too fast, and Rodrigo to accept that he'll be loved.  Oh, and he gets a potential love interest in Roxanne (Kylie Bunbury).

Yes, The Sitter I know isn't going for anything called intelligence or wit.  It is suppose to be moronic, with people one doesn't like and we are just suppose to take all that it gives us without thinking.  However, as I see it Brian Gatewood and Alessandro Tanaka's script isn't just lazy, but so wildly misguided.

It makes the common mistake of trying to mix the raunch of a Judd Apatow production with sensitive insights and life lessons.  We are suppose to believe Noah has grown as a person by seeing that these kids have issues (as opposed to just being obnoxious and perhaps crazy).  We are also given some insight into his own issues with the daddy that doesn't love him.  Hence, the reason he dropped out or was suspended from college (despite being 'brilliant') and is a general screw-up is because his father left him.

It doesn't work because Noah goes out of his way to be unpleasant.  His father leaving him is no reason to sit on the couch and not answer the phone when his mother asks him to.

Furthermore, the screenplay goes through all the motions of having the three children have their 'touching moment' in a method that appears to come from a how-to guide.  Each child has his/her issue, and we expect each issue to be addressed.

In regards to Slater, at first I thought it was just excessive anxiety to where he was a little hypochondriac.  What pre-teen boy doesn't get a little anxious around girls?  Well, I had one friend in middle school who was basically a player back then, but I digress.  It isn't until we see Slater interact with his classmate Clayton that we get the first full sense that he may be Slater's unrequited love.

Maybe it's me, the fact that I'm old-school when it comes to sex among the junior set, but when I was around Slater's age (between twelve and thirteen, given he was in the same class as the girl celebrating her bat mitzvah), I wasn't even aware there was such a thing as homosexuality.  I also when I was Blithe's age (I figure around six to ten) I was not obsessed with being famous and wouldn't know what a 'hot club' would be.

The Sitter, I take it, is set in a world that asks kids to grow up too fast, and I think because of that I didn't fully accept it as being real.  Leaving that aside, the film was far too rushed to get into the problems all our characters appear to have.
I also disliked what I considered to be rather racist and stereotypical characters which were there for 'laughs'.  Giving Rodrigo a peculiar accent struck me as dumb (even if he came from El Salvador, it sounded too excessive).  The black characters (minus Roxanne) appear to be thugs and ganstas; seriously, do all black people speak like they are in rap music?   Again and again I wouldn't put it as deliberately racist but more as a cheap way to try to get laughs.

A comedy should make you laugh, and I didn't laugh.

If I went over the performances, I can say there weren't any.  Not even from OSCAR NOMINEE Jonah Hill (how close they were to give him an Oscar they never gave to such "no-talents" like Claude Rains or Montgomery Clift) or Sam Rockwell, who was obviously slumming here for quick cash.

Seriously, there are better things to watch than The Sitter, things that are more entertaining and intelligent...like a colonoscopy.