*Author's note: In recognition of two Abraham Lincoln films, the biopic Lincoln and the horror/comedy Abraham Lincoln: Vampire Hunter, I've decided to look at two television miniseries about the 16th President.  This is the second.

I make no secret my utter disdain for Gore Vidal.  Still, I suppose that every once in a while, something good could come out of him.  Such is the case with the miniseries Lincoln (or Gore Vidal's Lincoln, not to be confused with Gore Vidal's Caligula).

Lincoln covers the years the 16th President was in office: 1861-1865, beginning with his arrival in Washington City on the eve of war.  President-Elect Lincoln (Sam Waterston) soon gathers his Cabinet: as his Secretary of State, a rival, William Seward (Richard Mulligan), and as his Secretary of the Treasury, another political rival, Salmon P. Chase (John McMartin).  Both are eyeing the Presidency for themselves and believe Lincoln to be weak, though as Chase observes, "an opportunist".  Also arriving with Mr. Lincoln is Mrs. Mary Todd Lincoln (Mary Tyler Moore), their children Willie and Tad, and a faithful secretary, Johnny Hay (Steven Culp).  Hay is friendly with the Lincoln's eldest son, Harvard student Robert (Gregory Cooke).

Lincoln is inaugurated, and the Civil War commences.  Lincoln is frustrated by the Union generals' inability to take the fight to the South, and in particular to General George McClennan (David Leery), who has delusions of his military genius but who continuously insists he does not have the material or the men to take the fight to Robert E. Lee (despite outnumbering the Confederate army on at least one occasion 10-1).  Mrs. Lincoln, for her part, indulges in renovating the White House (and doesn't mind dipping into the government till to finance her own wardrobe), while employing a dressmaker, free black seamstress Elizabeth Keckley (Ruby Dee).

The war drags on, and Lincoln endures both the highs and lows of his public and private life.  Willie dies, Mrs. Lincoln finds herself embroiled in a scandal where she in effect sold the President's State of the Union Address to a newspaper in exchange for cash (one figures to cover her mounting debts).  Mrs. Lincoln also has bouts of mental instability, which she calls "the headache", making her behave irrationally.

The machinations of some of his Cabinet and their families are also covered in Lincoln.  Secretary Chase, who was about to swear-in the President as the new Chief Justice of the Supreme Court, learns that his son-in-law, Senator William Sprauge (Thomas Gibson), 'The Boy Governor' (having earned the name due to him being elected as Rhode Island's head at age 29), had run the blockade and provided arms to the Confederate Army in exchange for cotton to keep his factories running.  Making things worse, Sprauge's fortune had financed a failed effort to draft Chase to replace Lincoln for the Republican Party nomination.

The Radical Republicans also thought of dumping Lincoln, who faced stiff opposition from McClennan, who would have made peace with the South as opposed to Lincoln's unconditional surrender policy.  The President, however, has loyal aides and friends, such as his secretary Hay, Congressman Washburn (Jerome Dempsey), and General Ulysses S. Grant (James Gammon), who is the general who finally fights (even if the casualties are horrific).

At last, after the five years of brutal war, the Union army triumphs, but Lincoln, who has felt that once the war ends, so does he, has one brief moment of respite before going to Ford's Theater.  Lincoln ends the way it began: with a train ride, but this time, the President's body is going to Springfield, Illinois for burial. 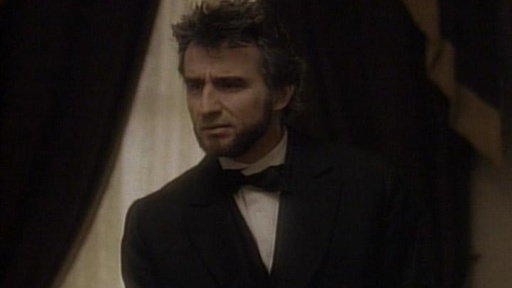 Lincoln is a brilliant miniseries because it allows actors to make these lofty historical figures into flawed humans.  It does what any good historic film should do: bring history to life.  It is perhaps curious to see Johnny Hay, a future Secretary of State, being a big fan of whorehouses, going so far as to take Robert Lincoln, Governor Sprague, and the President's old law partner out to a house of ill repute.  However, this is something that brings these characters out from history books and into circumstances people could understand (if not strictly relate to).

The scheming, the sorrow, the bouts of melancholy or foolishness that we know of ourselves are presented in Lincoln as part of their own lives.

Director Lamont Johnson won the only Emmy Award Lincoln received for the 1988 season, and we can see why he came out a winner.  The performances are all excellent, especially when we see that for some of the actors, this was a change of pace.  Mulligan, for example, is best known for comedy, particularly adept at playing bumbling, slightly befuddled characters like in SOAP or Empty Nest.  In Lincoln, he's as far from Harry Weston as can be imagined.  Mulligan plays Secretary Seward as a shrewd and calculating operator, but who is outmaneuvered by the President.

However, it's a credit to Johnson's directing, Mulligan's acting, and Ernest Kinoy'swrit of habeas corpus to prevent the Maryland legislature from voting for secession) to appreciating Lincoln as both a politician and as yes, a friend.  He never loses respect for Lincoln's office, but Johnson allows us a few moments when we see a genuine affection from Seward to Lincoln.

Mrs. Lincoln has suffered injuries from a coach accident.  Seward is the only Cabinet official whom Lincoln trusts enough to stay with the President and First Lady in the hospital.  Seward is also the man who brings proof of Mrs. Lincoln's involvement in passing on the State of the Union to the New York press.  The regret and pain Seward expresses in having to inform the President of the First Lady's actions is never spoken, but Mulligan expresses it through his voice and face.

Likewise, there are surprising performances from those who were not as well-known then as they are today.  Culp shows he can be a great actor by making Hay an eager follower of Lincoln, a man devoted to the President and his policies, and who, despite his indulging in the pleasures of the flesh, has a moral core.  He, for example, is furious when he learns of Kate Chase's engagement to Governor Sprauge.  We see Hay react with anger at how people are plotting against his boss, understanding of what this means, and a genuine hurt given that for much of Lincoln we can see Johnny Hay is in love with the vivacious but manipulative Miss Chase.

Gibson, who would go on to become the straight man on Dharma and Greg, is totally committed to the portrayal of the duplicitous Governor Sprague.  His voice is one that sounds a bit too educated (as if he's trying to behave as if he were better than everyone around him), and he can appear to be quite vicious (even if he does start out as a more decent individual).

There are no bad performances in Lincoln, even in the smaller parts such as Robin Gammel's Senator Stephen Douglas, George Ede's blunt Irish butler Mr. McManus, or Dempsey's Congressman Washburn.

The main parts, however, are remarkable.  Mulligan, as I've stated, is a revelation.  However, Moore as the tormented Mary Todd Lincoln is equally brilliant.  She goes from slightly haughty and self-indulgent to being a deeply caring wife and heartbroken mother to dead children and ultimately a widow.  The agony she expresses as she is forced from her dying husband's bedside is heartbreaking, as are whenever she slips into moments of insanity.

Matching her is Dee's Mrs. Keckley, who comes across as a strong woman who, like Seward, grows to become about the only friend the much-tortured Mrs. Lincoln has.  It's unfortunate that her part was small, but in their scenes together, Dee and Moore make a formidable team.

Curiously, while Dee and Moore were nominated for their performances, Sam Waterston was inexplicably left out for his simply brilliant turn as President Lincoln.  He not only got the physical aspects of the 16th President right, but he also got what would have been Lincoln's western accent down to where it sounded so natural.  Add to that, Waterston also basically is a standard to which all other Lincolns are matched in how he brings the President deep humanity.  We see this whenever he endures painful loss or in the scene where the President opens up slightly to Seward to express the pain his wife causes him.

Waterston captures the agony of the office in his voice, in his movements.  He also shows both the shrewdness of his maneuvering and the humanity of the man (as in when he gently looks over the list of soldiers to be executed and muses how many of those he can 'squeak by' with a pardon).  The burden of knowing that thousands will die in the awful conflict weighs heavily (as do the antics of his wife), and Waterston brings them all into his portrayal of this brilliant and complex but much-troubled man.

If I am to find fault in Lincoln (and I really don't find that much fault in it), it is in the images of the battles.  I do believe they were made by reenactors, and sometimes they look as if they were being staged.  However, that really is a minor, minor point that doesn't take away from some great performances and beautiful moments.

Lincoln is a brilliantly made miniseries: well-acted, expertly directed, and with great wit and wisdom in its screenplay.  The series moves effortlessly and gives us an almost close-up look at President Lincoln.  It's as good a film as its subject.

It's more remarkable that it is associate in any way with Gore Vidal, as hideous a person as ever walked the Earth.