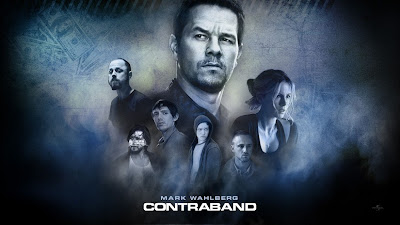 I will continue shouting it on the highest hills: despite his Oscar nomination, Mark Wahlberg is NOT an actor.   He isn't a bad action star in that he is in vehicles that allow his expressionless, emotionless face and massive body to take down bad guys.  However, I go on record to say Mark Wahlberg is NOT AN ACTOR.  If you think he's an actual actor, then let's have him play Othello, or Henry Higgins, or Willie Loman, or Big Daddy.

I say all this because Contraband is just a routine, even dim-witted, action film.  I can't condemn it for that.  I can condemn it for being lazy, at times illogical, and riddled with a host of bad performances and an almost mean-spirited manner with certain characters.

Chris Farraday (Walhberg) is a former smuggler turned legit.  He has a wife he loves named Kate (Kate Beckinsale) and two sons.  Kate just happens to have a brother, Andy (Caleb Landry Jones), who despite his promises never turned straight.  He bungled bringing in drugs and was forced to dump the shipment into the sea.  Now he has to answer to Tim Briggs (Giovanni Ribisi), a powerful drug lord.

In order to bail out his inept brother-in-law, Chris has to go back to 'the life' one last time.  He takes his buddy/partner Danny (Lukas Haas) and Andy with him to Panama, where the original plan is merely to smuggle in counterfeit cash.  Even while Kate is deeply upset about this plan, she does want to save her brother's life.  While he's away, Chris asks his best friend and the Lennon to his McCartney of the smuggling world, Sebastian (Ben Foster) to watch over them.

Chris and his crew get themselves aboard a ship run by Captain Camp (J.K. Simmons), who knows Chris from his smuggling days and thinks (but can't prove) he's up to something.  While in Panama, Chris finds that they just don't make counterfeit the way they used to.  In order to get some real good stuff, he has to go to his old friend Gonzalo (Diego Luna).  Gonzalo is a lunatic who forces Chris and Danny to steal 'something' from an armored car.  Andy, meanwhile, is forced to get more drugs after Tim threatens his nephews.  Earlier, Tim brazenly attacked Chris' family, forcing them to take refuge with Sebastian.

You already should know that perhaps this was not the wisest move.

In any case, despite the limited time the crew has they miraculously managed to come aboard the ship with both the good counterfeit, the drugs (unbeknown to Chris) and 'something'.  At last, Sebastian's duplicity is exposed (putting her life in danger), Andy's stupidity keeps growing, and Chris and Tim confront in a final battle.

I know Contraband knows what it is (a heist film that shows our hero to be clever but someone roped into doing wrong against his will), so I can't begrudge it at least the fact that it's self-aware.  However, it's the fact that Aaron Guzikowski's screenplay (adapted from the Icelandic film Reykjavik-Rotterdam) makes no demands on either the characters or the audience that makes Contraband a remarkably routine film.

We've seen it all before: the family man who was a master criminal having to jump in to "one last heist" because of family.  The 'friend' who is anything but.  The "twist" in the plan that almost everyone but the master criminal can either see or at least suspect.

The only director who came close to pulling an actual performance out of Wahlberg has been Martin Scorsese (but he IS Martin Scorsese).  Here, Walhberg continues being a star who despite his best efforts cannot express emotions.  He is no different when he is attempting to be gentle and loving towards his wife as he is when he is raging, except perhaps in the volume of his voice.

As if to compensate for Wahlberg's lack of emotion, Ribisi decided he was going to go all-Method as the villain Tim Briggs.  How Ribisi talked the Icelander into allowing him to sound as if he were channeling Truman Capote will be a great mystery in cinema history.  Tim Briggs is so wildly overacted (particularly given the routine nature of the film) that he almost comes off as a parody of a thug.  The voice he adopts (with an offbeat Southern accent) is if nothing else, quite amusing.

I can't say that the decision to have Kate play a character named Kate was intentional or not, but she didn't distinguish herself in Contraband.  Even worse is how the film treated her: I counted three times where she was attacked physically (the third one had her, to quote Twin Peaks, 'wrapped in plastic' about to be buried alive).  Somehow, I am personally troubled to see anyone (a woman in particular) assaulted again and again as a way to create some action.  It's one thing when the woman is as aggressive (perhaps even more so than the men), such as in Haywire.  It's another where the woman is portrayed as a victim.

I thought Foster did on the whole well as the sleazy Sebastian, but again, the script has no follow through.  We're given a brief moment of him attending an AA meeting...I wonder why.  Oh yes, to see him fall off the wagon.  Again and again Contraband goes out of its way to make no sense.  The entire Panama sequence makes no sense.  We're told just how little time Chris has, but the story appears determined to lengthen his stay by having a needless (but not unexpected) complication (and a chance to have us laugh at the wild hysterics of Luna, right down to wearing duct tape as masks on his robbery).

Would it really have killed Contraband to just let Chris get the counterfeits and then left Panama?

If anything was nice about Contraband, is how it slammed Jackson Pollack (an artist I've always thought did nothing but squiggles).  Still, given that all the chaos Gonzalo forced Chris into, it never occurred to Chris to think about what Gonzalo was stealing.  I figured it out while the robbery was taking place.  Why couldn't Chris?  As I watched this scene, I kept thinking this art heist was a waste of time.  Why couldn't Chris?

Contraband, I'm sure, will be a highlight when Mark Wahlberg gets the Kennedy Center Honor for his wide and varied career as one of the leading lights of cinema.  Somehow, the idea of that happening is both far worse and yet more entertaining than the film itself.