The Big Parade: A Review 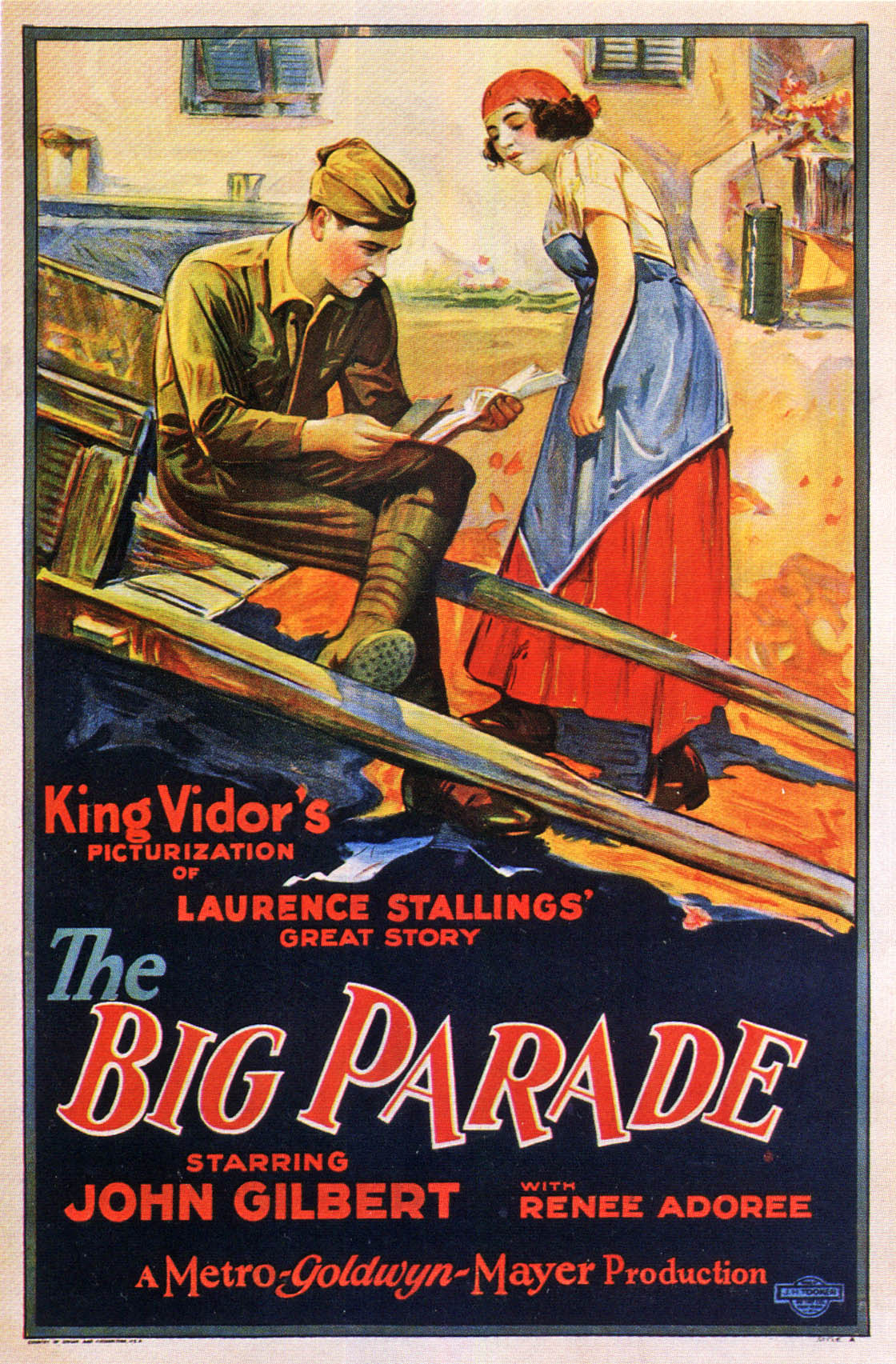 The Big Parade is a war film that isn't as well-known as perhaps it should be.   In the annals of war films, The Big Parade, released a mere seven years at the conclusion of the First World War, would have struck home with many a veteran.  What makes The Big Parade a great film is that it doesn't neglect the human cost of war, both for soldier and civilian.

We are quickly introduced to our three main characters.  You have working-class construction worker Slim (Karl Dane), working-class barkeep Bull (Tom O'Brien) and James Apperson (John Gilbert), scion of a wealthy industrialist.  America quickly enters the Great War, and so do our three doughboys.  James is both the most reluctant and the most eager: reluctant because he isn't used to hard work and because his mother would rather him not go, but enthusiastic because it will please his girlfriend Justyn Reed (Claire Adams).  With that, he (along with Slim and Bull) go off to France.

The Big Parade then follows our three men as they go through the trials and travails of war, both the humor and the horror of the conflict.   James soon begins a romance with beautiful French girl Melisande (Renee Adoree).  He balances his love for Melisande with his fondness for Justyn (to whom he finds himself engaged to).  Despite this, he and Melisande are still in love.

After the lovers come close to ending their romance, we get to the actual war. The trumpets announce they are moving to the front, and in a beautiful scene Melisande and Jim say their hurried goodbyes.  Now our three characters experience the war: the airplane bombings, the fear of being gunned down in the forest, potential gas attacks, and the awful silences in the night.  While in a foxhole, Slim goes to take out the Germans, and the eventual agony of not knowing whether he made it or not is too much for Jim.  He goes out there himself, and is wounded after finding Slim has been killed in action, but not before going on a vengeful spree himself.

In the hospital, Jim learns that Melisande's farmhouse has been taken and retaken at least four times in a day.  Desperate, he leaves it in a mad effort to go find his love.  She and her family are now refugees, but Jim does not find them.  The war is now over and Jim returns, unaware that Justyn and Jim's brother have fallen in love while he was away.  Jim returns, perhaps in triumph, but without a leg.  Jim tells his mother about the girl in France, and like all good mothers, encourages him to return to find her.  We end The Big Parade with the lovers reunited.

King Vidor, one of the great but not well-known/remembered directors, brings a full range of emotions out of Harry Behn's adaptation of Laurence Stallings' story.  We have bits of comedy (as when James has a hard time cutting Justyn's rather heavy cake to share with Bull and Slim) and rather touching scenes (as when James first meets the beautiful Melisande).  He doesn't shy away from the negative aspects of war, however.  The tension of the soldiers when they march into battle for the first time is incredible and nerve-wracking.  Vidor gives us a first-person view of the soldiers marching and dying (at times moving the camera as though we were marching alongside our characters).  We also get the great tragedy the war causes in both body and soul.  When Jim returns as an amputee, the pain in his mother's face is just as heartbreaking as that of seeing Jim with part of his leg gone.

It's unfortunate for Gilbert that sound came, because in terms of silent screen acting, he was among the very best.  His face was extremely expressive.  Unlike in most Gilbert films, he did not have a mustache, which made him look younger.  This made his role as the pampered son who grows to manhood more believable.  He has a wonderful flair for comedy when he is courting Melisande, but when we see him in fury over the death of Slim or in agony in seeing his parents again, it shows a brilliant actor.

Adoree is not only a beauty to behold in The Big Parade, she also plays Melisande as a sweet but smart girl.  If the scene where the lovers part doesn't get to you, I'd wonder whether you have a romantic bone in your body.  It's a beautiful and tender moment played so well by Adoree and Gilbert that you yearn for them to have a few more moments together.

The realism in The Big Parade extends even with the title cards.  When Melisande 'speaks', the titles are written in French (a rarity that brings the reality of James' inability to converse with her to life).  The varying accents and mispronunciations entre le francais et l'anglais is handled beautifully in The Big Parade, and more importantly, it adds to our understanding of how these two lovers attempt to express themselves in different languages (again, a rarity in silent films).

If I were to find any fault in The Big Parade, it is that it takes quite a while for the story to move forward.  A great of time is taken up in the courting of Melisande by Jim, and after a while one begins to wonder whether there's an actual war going on.  Granted, it serves to make the separation between Jim and Melisande more heartbreaking, but I wonder if modern audiences would have the patience to sit through all that before getting to the actual fighting.  As I watched the film, both the courting and the hijinks of Bull and Slim was trying MY patience, and I love silent films.

It's a curious thing to me when it comes to war films.  In the decade after the First World War we had a variety of films that dealt with the war that were open about how brutal the war was and how it impacted those involved on both the front lines and the home front.  Two of the first six Best Picture Oscar winners (Wings and All Quiet on the Western Front) were about World War I, and a third Best Picture winner (Cavalcade) had the war as a backdrop.  Some of them are among the greatest films ever made.

Conversely, we have, after a decade of war in Afghanistan and Iraq, yet to have THE war film for our generation.  Most of the war films made after the invasions of both nations are thinly-veiled propaganda films that beat us upside the head that these wars are evil and we are the aggressors.  That may be the case: I leave that to history.  However, I find that the war films made about the conflicts in the Mideast are too involved with telling us what the makers think to delve into the horrors of war.  The previously mentioned films certainly had a definite point of view (World War I was a brutal and foolish exercise) but they concentrated on the characters more than on the views of the filmmakers.

Films like Wings, All Quiet On the Western Front, and The Big Parade, don't skate past the horror of that war.  However, they kept the focus on the people both doing the fighting and the civilians.  In short, they let the story do the telling.
This lesson is one that today's filmmakers would be wise to learn if they wish to make films that have the power that these films have.  By not losing focus on the fact that war affects so many lives, films like The Big Parade still have the power to move us.

On the whole, I think The Big Parade is a bit long, but once we get past the surface frivolity of our boys, we get a painful reminder that for some, a war does not end when the shooting stops.  Still, at least with The Big Parade, we end on a note of hope, something audiences then and now will always find great comfort in.