We had two competing Snow White adaptations this year.  This doesn't necessarily show that Hollywood has run out of ideas, but it does show that for some inexplicable reason filmmakers happen to hit on the same idea at the same time.  The first Snow White film out of the post is Mirror Mirror, a light comedy that does what it set out to do and while with a few missteps generally accomplished its goal of being sweet, inoffensive, and generally charming.

The Evil Queen (Julia Roberts) begins by telling us that this is really HER story.  In an animated prologue we're told the basics: the King has a beautiful daughter but left a widower, he remarries, the King disappears, the Queen holds the Princess basically under house arrest.

This Princess is Snow White (Lilly Collins).  She is a sweet girl, but one unaware of anything going on in the Kingdom, her only friends the staff, in particular the Baker Margaret (Mare Winningham).  The kingdom is basically bankrupt thanks to the Queen's extravagant spending on parties and gowns.  She does what any good government does when it has spent more than it takes in: she raises taxes on her subjects that can barely pay the taxes now.  While marriage to a Baron (Michael Lerner) would solve her financial problems, she'd rather not marry him.

She does have her eye out for any good-looking rich young prince, and unbeknown to her, one just happens to be riding across her kingdom.  This is Prince Alcott of Valencia (Armie Hammer).  Prince Alcott, however, is waylaid by a group of forest thieves, whom he discovers are seven dwarves.  Despite the fact that they are under five feet tall (versus the 6' 5" Hammer), they best our slightly dim-witted heir.  Snow White, meanwhile, had managed to wander into the forest and village to see what had become of her kingdom.  While in the forest, she comes across our hero and his travelling companion Renbock (Robert Emms), bound.  She frees them and goes on her way, finding the village in misery where once was plenty.

The Queen, however, becomes enchanted by Alcott's wealth and figure (given not only was his gold stolen, but his clothes as well).  At yet another ball, she intends to use her charms on the Prince, but the Prince instead becomes enchanted with a young beauty, whom he immediately recognizes as the girl who rescued him.  However, the Queen is furious and orders her lackey Brighton (Nathan Lane) to kill her.  Obviously, he fails, and she flees to find shelter with our Seven Dwarves.

The Queen uses magic to enchant the Prince, but bungles it, giving him a Puppy Love potion (which has him behaving exactly like a puppy).  Snow now gets the Dwarves to steal but only if they return the money to the village, and with their theft of Brighton they hit the mother load.  The Queen cannot be helped, not even by her magic mirror (which sends her to a haunted world).  However, when the Prince hears that Snow White is dead and that a group of dwarves have stolen the gold, he goes after them...and promptly gets stripped again.

Nonetheless, the wedding will go on.  Snow, now a bit of a warrior princess, has other ideas.  They raid the wedding (where they steal more clothes...what is it with them taking clothes?) and kidnap the Prince.  Eventually the spell is broken (by True Love's first kiss), the mysterious Beast of the Forest is not only defeated but revealed, the Queen dethroned and Alcott and Snow married (complete with a closing Bollywood-style number).

Singh brings his stylized visual flair to Mirror Mirror, and the bright colors and lavish nature suits the subject well.  This is a spectacle for the eyes, and if one watches the film and admires the beauty and grand style of it, one can find much to enjoy.

Costume designer Eiko Ishioka died after Mirror Mirror, and this is a brilliant high note on which to end her career (which included an Oscar for Bram Stoker's Dracula).  Ishioka appears to stick to a few basic and bright colors (gold, blue, and red), but whenever the Queen indulges her passion for clothes, Ishioka goes all out.  Even the rabbit hat the Prince wears at the Costume Ball doesn't look too ridiculous but fits into the whimsy Mirror Mirror is seeking out.

The details in the clothing is remarkable: even with Snow White's warrior outfit, one can see great intricacy in it.  It will be shocking if Ishioka does not WIN a posthumous Best Costume Design Oscar, let alone be nominated for the category.

Likewise, Mirror Mirror's set designs continue the whimsy and storybook motif the film is seeking.  The big set of the Palace is also filled with such extensive detail it might be good to freeze the picture and zoom in to take it all in, but the scenes in the village and the Mirror's hut are also first-rate.

In terms of the story and acting, I think everyone was in on the joke.  No one made an effort to take this seriously, and everyone behaved accordingly.  I would argue that Snow's conversion from wide-eyed innocent to semi-tough warrior isn't quite believable (especially since in the end, she still got help from the Prince to defeat the Beast), but I can't fault it much for that.

On the whole, since I am asked to admire Mirror Mirror more for the look than the content (in the same way I can admire a cake), I don't ask for much in terms of story or of acting.

One can say Julia Roberts was having a hoot of a time being campy and over-the-top as the comically evil Queen, but I would argue she played the part given her correctly (as a woman more silly than dangerous).  Likewise, Hammer nailed (no pun intended I swear) the role of the over-eager Prince (though I would argue how the vaguely-Nordic looking Hammer could possibly be a prince from sunny Spain: Moorish our Hammer does not look).  He came across as enthusiastic, elegant, if not too bright, though I confess a little part of me felt bad for him having to see him do this. Somehow, seeing anyone hop around like a puppy and licking someone's face almost made me embarrassed for him.  Here is where I wasn't convinced he was a man under a spell, just an actor trying a tad too hard to convince us he was under a spell.

Collins was generally sweet as the Princess, and I don't think she was called to do much beside look pretty and innocent.  In that case, she did her job well.

Again and again, I have to think that Jason Keller and Marc Klein's script (from Melissa Wallack's screen story) is geared towards children.  It's a generally sweet affair, one that while could have been stronger in the "women can do for themselves" or "wealth comes in friends" lessons they apparently were aiming for, the zippy way the story moves and the general fact that Singh did not ask everyone in front of the camera to take this too seriously goes far in making Mirror Mirror a little film that children (especially small ones) will like and their parents need not worry too much over.

I DID wonder why we had to have the thieves strip their victims so much or why Singh lavished a great deal of attention on Hammer's physical beauty, but that's just a mystery I won't be able to solve.

On the whole Mirror Mirror is a sweet little film, inoffensive and cute in a whimsical way.  It's not deep, its story isn't the greatest, the performances are a bit self-conscious that it is all suppose to be a lark, but we can forgive that.  It's a visual feast (in particular with the art direction and costumes), and as a result, Mirror Mirror is a lovely reflection of a cute kid's film. 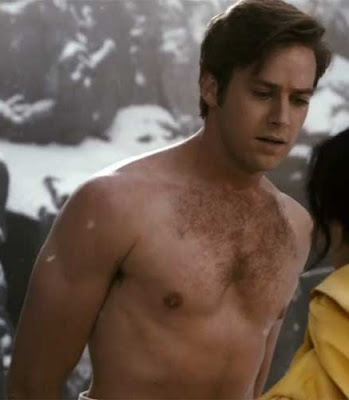 No offense son, but this isn't exactly a selling point for me.