The Spy Who Loved Me: A Review

THE SPY WHO LOVED ME

The Jaws of Death...

After the good-not-great Live And Let Die and the clumsy The Man With the Golden Gun, a viewer of the James Bond film series would be right to be concerned that the franchise was beginning to lose its way.  Mercifully, The Spy Who Loved Me, Roger Moore's third turn as 007, brought us a very good film, one that worked because things were taken a bit more seriously (and we toned down the joking) and because it took the more grandiose elements of previous Bond films down.  Stripped of the more outlandish aspects of the franchise, TSWLM made an impressive entry to the series.

Now both XXX and 007 are working leads to find the stolen subs, the big break coming when a tracking system used against them is being sold on the black market.  These blueprints must be recovered at all costs by its owner, one Karl Stromberg (Curt Jurgens).  He is a wealthy industrialist/capitalist exploiter (why do I get the sense an Occupier would see him as the latter--just a digression) who has dreams of recreating the world under the sea Stromberg so loves.  Those subs are part of his nefarious scheme, as is his henchman, a giant with metal teeth named Jaws (Richard Kiel).  With Jaws as his assassin, he is close to recovering said plans.

As part of the effort to track down Stromberg's unused super-tanker, the Liparus, they board an American submarine.  However, the ship is seized by Stromberg, and his wild plan is finally revealed: he will blow up New York City and Moscow not for extortion, but to create a new world (one where, one suspects, he would rule as a new Poseidon).  Bond leads a daring taking of the Liparus while an unsuspecting Stromberg escapes with XXX to his ocean headquarters.  After a lengthy battle Bond and the combined Anglo/American/Soviet crews take the Liparus, Bond goes after Stromberg, faces Jaws one last time, and rescues Anya.

The Spy Who Loved Me has a big plus in that both the scenario and the actors take the premise seriously.  Bond still has his quips but those are kept at a minimum.  Instead, the focus on SWLM is kept on the story, moving the plot along at a steady pace from location to location: Austria to Cairo to Sardinia without going into tangents.

In fact, SWLM is a remarkably stripped-down film (no pun intended).  We see the difference between this and previous Bond films in a variety of ways.

First, we have only ONE Bond girl.  The story keeps Anya at its center without having Bond bed another beauty.  Going further into Anya, she is made into something we haven't seen in previous Bond films: his equal.  She isn't the equivalent of Bond (she, for example, isn't as slutty as he is, and she is a tad dimmer than he is), but Anya gives James a run for his money.  The franchise has not given James Bond a female who can match him in terms of expert kills, devotion to duty, or shrewdness of mind.  Anya is even able to make Bond uncomfortable by reminding him of the wife he lost in On Her Majesty's Secret Service, and the fact that we are able to reference back to a previous story shows that we are having an effort at a continuity that was all but ignored in the films between OHMSS and SWLM.

I don't think Barbara Bach is the greatest actress to have played a Bond Girl: her voice was a little soft at times.  However, she managed to make Anya both a strong woman in her own right and one who seeks to avenge her man.  This gives XXX something few Bond Girls have had (and something most of the Bond characters male or female have had): a motivation.  Whenever Bond has met a beauty, they don't start out as having a reason to go after either Bond or the villain du jour, but here, the screenplay by Richard Maibaum and Christopher Wood does what good screenplays do.

They put us ahead of the characters, which keeps us in anticipation of when the inevitable conflict comes into the play.  We know from the very beginning that Bond has killed Anya's lover, but neither of them know this until well past the halfway point.  This gives both the characters and the mission an extra level of conflict.  They have already found attraction with the other; they have to complete the mission they have been given.  The tension in SWLM is to see what will happen after Stromberg is defeated.

Lewis Gilbert was not only able to get a strong performance out of Bach, but he also gave Moore the best chance to show he could create a fully-rounded character in Bond.  The expression of amusement he has when XXX is going over his accomplishments fades when she brings up the subject of his one and only marriage.  Moore in this brief moment allows the character to let down the facade of the smooth charmer devoted to Queen and Country and show us the vulnerable, hurt, pained man behind the professional.  Moore has another great moment when they have escaped Stromberg's exploding lair.  Anya announces that the mission is accomplished, and for a brief moment one can see genuine fear in Bond's eyes as she fires her gun.

Still, for the most part Moore has the charm and smoothness 007 is now known for, but this round is perhaps Roger Moore's finest hour as the British Secret Service agent so far.

Jurgen's Stromberg is not played for laughs as the villain.  He has a cold, ruthless manner to his Old World charm.  Stromberg appears to be a man not to be trifled with.  Granted, he doesn't really appear to be the type of person who sees Anya as the Eve to his Adam in his underworld city, but as villains go he is less camp and more serious.

Kiel is a quiet menace as Jaws.  The idea of this giant of a man being a killer who can exterminate with his metal teeth could have come off as comic, but it's a credit to Gilbert and Kiel that they never played things for laughs.

A slight digression.  The double-act of Gogol and M gives the characters a chance to show that the two 'advisaries' were actually quite respectful and admiring of each other.  We see this in how they behave towards each other, addressing each other as "Alexis" and "Miles" respectively.  This is certainly the first time M has been called by his first name, which given how long he's been in the series (having appeared in all the previous Bond films) is a bit of a shock.  The fact that the heads of the secret agencies are on a first-name basis (and appear to be almost friends) shows that they see each other as fellow businessmen and professionals, with all the rights and privileges thereof.

Part of what makes that work (along with just about everything in The Spy Who Loved Me) is how Gilbert used the images and music to serve as a counterpoint to what was the subtext.  The best example is in the Pyramids sequence.  In this scene, Bond tracks down a man with information, only to find the man with a beautiful woman whom we know is Anya but whom he doesn't know.  The setting is a night show which gives us a 'sweeping view' of the history of the Pyramids.  The show itself appears something closer to a spectacular at EPCOT than a strong history lesson, but Gilbert manages to use the rather grandiose narration to match the rather sordid killing of the man both 007 and XXX are after.

The Marvin Hamlisch music is the coda (no pun intended) to how this scene is presented.  As the portentous music is played (to the audience watching the story of the Pyramids before the only surviving Wonder of the Ancient World), the murder of the information peddler and Bond's fight and escape from both Jaws and Anya's 'bodyguards' serves the scenes beautifully.  Sometimes granted, the score appears a bit dated (as if predicting the rise of disco), but no one can argue with the opening song.

Nobody Does It Better has the plus of Carly Simon singing the song in a romantic style.  However, Hamlisch's music and Carole Bayer Sager's lyrics are beautiful, clever (working the title of the film seamlessly) and Nobody Does It Better really has become one of the best Bond songs.  The fact that it came after one of the best opening scenes in a Bond film, a thrilling ski chase that culminates in an amazing jump over a cliff, only serves to make the smooth melody settle the thrills of that chase.

It also does describe James Bond very well, or at the very least, how James Bond sees himself.

The Spy Who Loves Me isn't perfect, but its flaws are generally small.  We DO expect the Lawrence of Arabia theme to play during Bond's sojourn in Egypt (and it does, though not when we expect it) and the idea that Stromberg expects Bond to show up is stretching things a bit (as is Jaws' escape, which can be seen as either comic or a way to not kill off a good henchman).  Finally, in the recap of Nobody Does It Better at the end, you get the hint that Hamlisch had another score in mind.

Listen to how the song is sung by a male choir, and you get the sense he was channeling One from A Chorus Line. The instrumental right after they sing "Nobody does it better" is eerily similar to what comes after the line, "every little step she takes".

Still, those really are not big matters in the overall film.

The Spy Who Loves Me takes the premise seriously.  It provides motivation for the main characters.  It gives them more emotional complexity than we've seen in a while.  It has a brilliant song.  It is a very good film, and one that might serve as a good introduction to those reluctant to enter the world of Bond.  It's easy to why we love the spy. 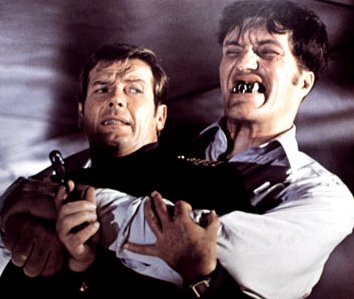