Live and Let Die: A Review 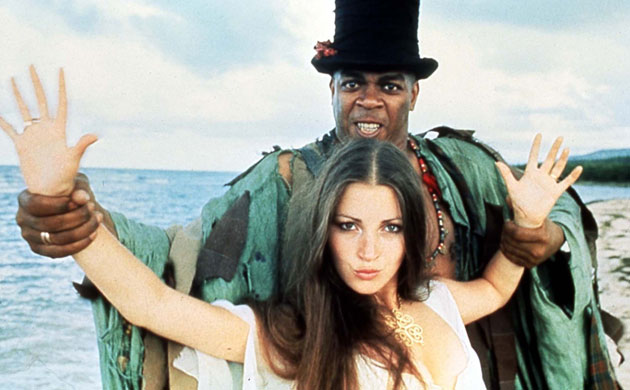 That Voodoo That He Do So Well...

Please visit the James Bond Film Retrospective for all the Bond film reviews.

Live and Let Die, the debut James Bond film for Roger Moore, gives new meaning to the term, "playing Solitaire", but more on that later.  This film, like the one before, I think is an important one in the franchise.  Note I said important, not necessarily good.  LLD is the first one to completely dispense with anything involving SPECTRE or a major criminal organization bent on world domination.  LLD was now going to set the standard for all other Bond films in terms of plot: a master criminal, a beautiful woman involved with said master criminal, and a couple of chase scenes that are hit-and-miss.

Three MI6 agents have been killed, and suspicion falls upon the small Caribbean island nation of San Monique, in particular its leader, one Dr. Kananga (Yaphet Kotto).  British Secret Service Agent 007 James Bond (Roger Moore) has been assigned to investigate.  His investigation takes him first to New York, where he runs afoul of a Harlem criminal organization headed by the mysterious Mr. Big.  Bond escapes Mr. Big's henchmen as well as meets the beautiful fortune teller Solitaire (Jane Seymour).  Bond's next stop is the vaguely Haitian island of San Monique.  A CIA agent, Rosie Carver (Gloria Hendry) at first is helpful in more ways than one, but we find she is a double agent; however, she's bumped off before she can say too much.  Kananga is displeased at Solitaire, suspicious that her mystical powers are weakening.

Bond enters Kananga's lair, as well as Solitaire.  After he seduces her (or rather deceives her into thinking it is in the cards that they be lovers), she loses her prophetic gifts entirely due to having lost her virginity.  No matter, she and Bond escape Kananga and his henchmen, the murderous clawed-hand Tee Hee (Julius W. Harris) and the mysterious Baron Samedi (Geoffrey Holder), a figure who resembles a voodoo deity.

Bond continues his investigation in New Orleans, where one of the agents was killed.  Here, Bond is taken by the mysterious Mr. Big, who turns out to be Kananga in disguise.  He has hatched a scheme to corner the heroin market across America.  The three agents had gotten too close to comfort and they had to be eliminated, and now Bond was becoming a nuisance.  Bond, yet again, escapes another attempt on his life via alligators, not without attracting the attention of Louisiana Sheriff J.W. Pepper (Clifton James).  With Solitaire's life in danger and time running out, Bond heads to San Monique for one last confrontation with Kananga and his henchmen, including the curious Whisper (Earl Jolly Brown).

Live And Let Die is an odd bird in this way: it is the first time that the WASPy James Bond franchise has attempted to cash in on the then-popular blaxploitation genre.  Granted, the original Ian Fleming novel had a black villain but now we get a whole host of early-seventies pimping to coin a phrase.  It might have been keeping up with the times, but today, hearing such terms as "honky" and seeing a cacophony of Afros hopelessly dates the film.  It's up to the viewer to decide whether having a black villain is a positive or a negative step, but for myself it shows that the franchise was making an effort to keep up with the times (albeit in a curious manner and perhaps to its detriment in the future).

Still, Live And Let Die has a plus in that Bond has the very first black Bond girl (sorry, Halle) in Rosie Carver.  Hendry not only made history as the first African-American to be romanced by 007 but she gave a wonderful performance in turns comedic and malevolent.  She appears to be both a bungler who try as she might can't get things right and also someone who is playing dumb and leading our hero into danger.

I found the performances to be overall good (with perhaps one exception which I'll get too).  Moore has a swagger, almost a nonchalant manner to his Bond.  This Bond enjoys the thrill of the chase, the company of women, and is rarely if ever afraid.  One has to have a certain sense of security to be a very white guy walking into a Fillet of Soul restaurant in both Harlem and New Orleans and think you wouldn't stand out.  Moore, granted, does at times appear to not quite believe he is never in any danger, and that runs the risk of making Bond look almost clueless as to what's going on.  For example, Bond has got to be pretty dim to NOT think he's being tailed while in Harlem.  Still, Moore has a certain charm that allows even a remarkably reprehensible act towards Solitaire to be (almost) forgiven.

Kotto equally has a smooth charm as the villain Kananga.  He is gentlemanly, almost courtly, towards Bond.  Kananga, like previous Bond villains, also has grand schemes, but he is different in that he doesn't want to take over the world.  Instead, he just wants to be a drug kingpin.  Kotto can be quite menacing, in particular whenever he threatens Solitaire, either physically or with deflowering.  When he has his suspicions confirmed that she is no longer pure, his reaction is a mixture of fury and almost hurt.  While the plan may be under par of previous Bond villains, Kananga at least has the sense to get involved in a plan that will be financially rewarding.

Seymour makes a splashy appearance as the tarot card-reading Solitaire.  She has an innocence blended with wit in how she deals with Kananga and with all men.  Solitaire, however, is no match for 007, and her total devotion to the cards allows her to be manipulated in giving it up to our secret agent.  Seymour is remarkably beautiful but she also shows she is a talented actress who can make a remarkably naive woman like Solitaire someone we care about, even if at times she does come across a bit dumb.

In the henchmen division, Harris' Tee Hee appears to relish being a bad guy, and his claw adds that particular Bond touch.  Holder's Baron Samedi doesn't have much in terms of dialogue, instead he has a menacing presence, especially when he gives his distinctive laugh.

Among the highlights in Live And Let Die is Paul McCartney's title song, a thrilling number that will rank among the best Bond songs, starting out slowly, then building into this torrent of sound, slipping back to a quiet mode and then crashing into a titanic conclusion.

If anything pushes Live And Let Die down, it is the fact that Tom Mankiewicz's screenplay at times is a bit jokey.  For example, when Bond and Solitaire are attempting to escape from the airport, a lot of time is wasted with Bond hitching a ride with an elderly flight student.  Going further into how Live And Let Die veers a touch too much into comedy is the entire chase scene in Louisiana bayou country.

I won't hold James' interpretation of the redneck sheriff against him: I think he played the part as it was given him.  However, it all does seem to make it look a bit like Smokey & The Bandit, which takes a bit away from what is suppose to be a thrilling chase in speedboats.

Allow me to digress on any idea of overt racism in Live And Let Die in this part of the movie.  In retrospect, having James use the term "boy" was a mistake, given the negative connotations the word evokes in the African-American community.  I don't think Mankiewicz or director Guy Hamilton were racists, and may have been merely trying for local color.  In their defense, it should be noted that Sheriff Pepper refers to white characters as "boy", so if one notes carefully he uses this phrase towards everyone, not just blacks, and certainly not with any malicious intent.

I also would say that at times LLD is a bit repetitive of other Bond films.  The sharks with which Kananga menaces 007 harken back to Thunderball, and the train fight might as well be a rematch from From Russia With Love.  However, those complaints are more for those who've seen the series previous efforts as opposed to those coming fresh to the franchise.

On the whole, Live And Let Die is a bit dated because it was trying to cash in on the blaxploitation trend popular at the time it was made.  The film at times goes long in the chase scenes, and adding bits of comedy both lengthens the film and distracts from what could be a better story.  However, I can't lie and say I didn't enjoy the film.  The performances were on the whole good, taking the premise seriously and playing it as such.  I also think that its plot is more grounded in reality than previous ones.  At least someone attempting to become a drug lord is more believable than trying to take over the world.

Granted, Kananga blowing up wasn't, but at least it was one of the most memorable ends to a Bond villain we're likely to see...

Next James Bond Film: The Man With the Golden Gun