I am not a Thor fan.  I wasn't crazy about Thor and I don't even remember Thor: The Dark World to where I wasn't sure I'd even seen it.  Apparently, I have. Out of all our characters in this longest and most expensive soap opera, Thor is the one I care about the least.

Now I come to the newest adventure with our Norse god. Thor: Ragnarok is a departure from his other adventures in that it lays the comedy thick on our more serious, almost humorless deity.  Contrary to any impression I may have left, I am not averse to humor in a comic book-based film.  It's only when it is so self-consciously aware that I get annoyed.

Thor: Ragnarok is fully aware of itself, and therein lies one of its major problems.

Our Norse himbo Thor (Chris Hemsworth) quickly defeats the demon Surtur, who has pledged to bring on the destruction of Asgard, or Ragnarok.  Thor has to throw in some quips and 'unaware' self-mockery before he finally manages to get back to Asgard.

That took some time because the new Keeper of the Gate, Skurge (Karl Urban) was too busy trying to impress some Asgardian hotties with some weapons he's fond of: machine guns he found on 'Midgard' (Earth), in a place called 'Texas'.  As such, he couldn't hear Thor calling to be swept back up.

In any case, once Thor gets back he finds his father, Odin (Anthony Hopkins) too busy watching bad theatrics celebrating his other son, Loki, to care much for anything.  No surprise that Odin is really Loki in disguise and the real Odin is in a nursing home somewhere on Midgard.

"THEY SEEK HIM HERE, THEY SEEK HIM THERE", they might just as well say before Thor comes upon Dr. Strange (Benedict Cumberbatch), who helps the Brothers Norse find Odin, who then tells them they have a long-lost sister who is going to kill them all before fading away.  Said sister, Hela, Goddess of Death (Cate Blanchett) now manages to defeat them, even destroying Thor's hammer.  Their escape kind of goes off and Thor ends up on Sakaar.

Sakaar is a rubbish planet, and that isn't a commentary: it's a planet where trash is dumped.  Our hunky hero finds himself at the mercy of The Grandmaster (Jeff Goldblum) who runs a gladiator-type competition.  "Sparkles", as The Grandmaster dubs him due to Thor's failed efforts to literally bring down the thunder, is thrown into the arena.  Loki, for his part, has managed to get to Sakaar before his brother, and managed to be among the Grandmaster's Court because...reasons. 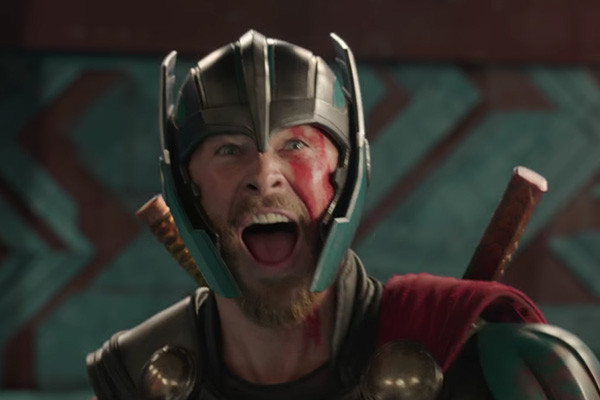 Thor is forced to undergo the cruelest torture: have his hair cut.  He also faces off against the Grandmaster's greatest fighter, who happens to be The Hulk.  Thor's thrilled: "he's a friend from work!", he shouts delightfully to the Grandmaster, while Loki looks on with fear.

Hulk, smash, however, and there has to be an actual fight.

At this point I'd argue that in a Thor/Hulk fight I would put my money on the god of thunder.  All Hulk has is brute strength, but Thor has both great physical strength and a warrior's strategy.  Needless to say, however, Thor loses because the Grandmaster ain't about to let his champion win.

Eventually, there is an escape after Thor manages to get Hulk to become Bruce Banner (Mark Ruffalo), and he gets help from Scrapper 142 (Tessa Thompson), who is really the last of the Valkyrie after all her sisters were killed by Hela in a previous coup attempt.

Oh right, Hela.  Well, she's laying siege to Middle-Earth, I mean, Asgard, with Skurge now her henchman.  Only Heimdall (Idris Elba), the previous Gatekeeper, stands in her way as he has hidden the sword that will allow her to invade and conquer the other Nine Realms.  Eventually all "The Revengers" as Thor has taken to calling his compatriots, get back to Asgard to fight Hela to the death.

This is going to make me sound like an awful snob, but I think the reason so many genuinely loved Thor: Ragnarok is because the target audience is either 14-year-old boys or those who think like them.

For example, to escape Sakaar "The Revengers" will have to go through a massive wormhole called "The Devil's Anus".  Granted, I've no proof of this, but I imagine screenwriters Craig Kyle, Eric Pearson and Christopher Yost (46, 37 and 44 respectively at the time of the film's release) all high-fived each other and giggled when they wrote "The Devil's Anus".

I imagine most 14-year-olds would find 'The Devil's Anus' hilarious.  I, sadly, am not 14-years-old and I don't think like one.

What would have been funny, if I had been asked, would be to call it "The Devil's Furnace". At one point however, Loki, with that same straight face he used, would use the exact same line he did in the film: "I'm asking for safe passage through the Anus" by mistake, not realizing what he'd said.  I'd even have allowed Thor, Banner and the Valkyrie to have burst out laughing at his malapropism.

That, however, didn't happen, because Thor: Ragnarok was not interested in trying to be serious.  Now, I can roll with comedy, even in a comic book-based film.  Ant-Man, for example, was a MCU film I genuinely liked in part because it had humor.  However, Thor: Ragnarok's big problem was that it was simply trying too hard to make everyone aware of how 'funny' everything is; it's like someone telling a joke and then asking, "Did you get it?", which as The Betty White once observed, only punctuates how it wasn't funny to begin with.

As I digress, if you look at a genuinely funny comedy, Some Like It Hot, you see the humor comes not necessarily from the premise but from everyone's reaction to it.  It is ludicrous to think anyone would have been taken in by "Josephine and Daphne", but everyone played it as if they were that dumb.  They weren't going on tangents, they weren't making asides, they weren't trying to rattle off quips.  They played the oddball premise perfectly straight, which made Some Like It Hot funnier. Thor: Ragnarok, on the other hand, kept pounding away the 'LOOK!  WE'RE BEING FUNNY!' bits right from the get-go.  Thor gives a long-winded explanation to his capture and has to pause while spinning.  Over and over we get this 'funny' bits that serve to make the film longer than Some Like It Hot was.  OK, by nine minutes, but still.

There's almost a smugness to Thor: Ragnarok, as if we're supposed to congratulate it for working overtime to be quippy.  We see this every time Hemsworth interacts with someone save Blanchett and maybe Hopkins, when he played it more straight.  Note I said 'straight', not 'great', because no Hemsworth Brother has ever shown me they can actually act, though the film did serve up the Obligatory Shirtless Scene that apparently Hesmworth is required to have in all his films.

Now, I'm told that Chris Hemsworth is a growing comedic genius, somewhere along the lines of a Cary Grant.  I don't find that to be true.

Yes, like Grant, Hemsworth is an incredibly, breathtakingly beautiful man.  Unlike Grant, however, I still think Hemsworth's 'comedic' abilities come not from him genuinely being funny, but by being an incredibly, breathtakingly beautiful man put in forced comedic situations.  Grant never played comedy with an awareness that the character or situation was supposed to be funny.  Hemsworth always plays his 'comedy' fully aware that it's supposed to be funny.  Therein lies the difference.

The one highlight for me was when Hemsworth and Cumberbatch are together, but not because they were actually funny or because Strange was even necessary to Thor: Ragnarok.  My enjoyment came from this 'Battle of the Baritones', to see which one of them could speak in a lower register.

It's hard for me to work up chuckles with exchanges like these:

A lot of what passed for comedy, from "Loki's Midsummer Night's Dream" bit to various exchanges between characters to the playing of Pure Imagination when Thor is introduced to the world of Sakaar to the Valkyrie falling off her ship after she just threatened anyone who would take Thor away from her was, for me, a case of simply trying too hard.

I figure Blanchett had a ball vamping it up for all its worth, but I couldn't feel anything for Hela. I spent most of the time trying to figure out where I'd seen Skurge before, and like everyone else he too was in on the joke, though he wasn't much part of the goings-on save for looking sad from time to time.  Ruffalo was perpetually a Nervous-Nelly when not in Hulk mode, and he wasn't that funny as Hulk either.

Come to think on it, Thor: Ragnarok seemed like two films mashed together, going from one to the other only when the first story seemed to be running out of steam.

Interestingly, Thor: Ragnarok is the first MCU film that I can remember where the CGI was so painfully obvious and fake. In this oddball mashup of Spartacus, Gladiator, The Running Man, Robin Hood and even Androcles and the Lion, it only makes matters worse.

Bloated, boring and worse, self-aware to the point of parody, I wonder if Thor: Ragnarok set out to deliberately insult my intelligence.  Comedy, to my mind, only works when the characters aren't aware of it.  Everyone here was aware of it, and no matter how hard they tried, when you point out that something is meant to be funny, it almost always isn't.