Days of Wine and Roses: The Television Adaptation 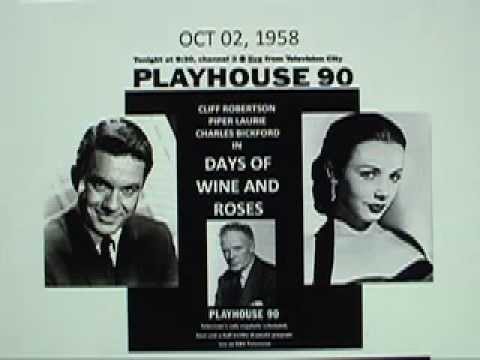 Television dramas could be counted on for at least one thing: being searing, uncompromising portraits to the human condition, with a little sex in it.  Days of Wine and Roses is one such portrait, a tale of the destruction alcoholism can take on even the most respectable people.  Most know Days of Wine and Roses because of the film adaptation, and it seems a shame that the teleplay is pretty much forgotten.  The original teleplay performed as part of Playhouse 90 is a gripping production, moving steadily down to its more hopeful ending.

I should note at least here, I won't compare the original with the remake.

After an introduction by Sterling Hayden, we get our story.  We go to an Alcoholics Anonymous meeting where in a series of flashbacks, Joe Clay (Cliff Richardson) tells us how ten years prior, he first met Kirsten Armesen (Piper Laurie) at a party his public relations firm was throwing for an Arab sheik. Kirsten, like Joe, liked to nip a little, and soon a romance blossoms.

However, in this romance and eventual marriage, there were three: Joe, Kirsten and booze.  The bottle soon starts taking over their lives, and we see this in little ways, such as when their home goes from posh to slum, and in tragic ways, such as in an effort to get money to ostensibly buy food but which ends up used to get more alcohol, Kirsten sells her beloved collection of books that were a source of pride.

Not even the birth of their daughter Debbie or help from Kirsten's father Ellis ('guest star' Charles Bickford) can get these two from their self-destructive ways.  It looks like their time drying out at Ellis' upstate New York nursery has helped them get back on their feet, but Joe, convinced that a 'little nip' won't hurt, smuggles alcohol into their bedroom.  They manage to get sloshed, and in a harrowing sequence, Joe tears apart his father-in-law's greenhouse to find the third bottle he had hidden in 'fifth row, third table, fourth pot'.

Eventually, Joe is rescued by AA, but Kirsten continues down her slide, going off with one guy after another to get her booze, and even manages to lure Joe to fall off the wagon.  Joe does recover, but Kirsten does not.  Just as she is still not able to give up the bottle, he is not willing to take her back, not until she sees she has a problem.

Director John Frankenheimer has some really harrowing and tragic moments, filmed so beautifully that it is almost cinematic.  The opening title credits have a man drinking in the shadows, with an off-kilter jazz score, giving Days of Wine and Roses an eerie, foreboding tone. Frankenheimer again and again gives us moments that speak for themselves, where we can fill in the blanks without things being spelled out for us.

There is the aforementioned book selling scene, or when Joe is taken to a psychiatric ward after going on his greenhouse tear.  He achieves this primarily with the use of shadows and the music, where the suggestion is more frightening than if it had been overtly shown.

He also does this with how he guides the performances.  Apart from Spider-Man, I cannot call myself a Cliff Robertson fan (his Best Actor win for Charly over Peter O'Toole in The Lion in Winter is still to my mind one of the worst choices the Academy has made).  However, Robertson's performance was smart and moving.  His collapse in the greenhouse is of particular note, his descent into darkness more one of drunken anger than hysteria, and his 'reward' a sad and frightening moment.

He is matched by Laurie, who is heartbreaking as Kirsten, the good girl who is brought to shame by her addiction with the bottle. Disheveled, chaotic and in denial, Laurie is a figure of pity as she fails to see herself as she truly is.

Both Laurie and Robertson make Kirsten and Joe sad but not totally pathetic, where they inspire pity and sorrow and not contempt and disgust. Bickford, though with a much smaller role, brings more sadness as Ellis, who sees his daughter fall shockingly low but is powerless to stop her.

There were a few things that were a bit odd.  The AA meeting got interrupted from time to time by a drunk, and it is unclear if this was writer J.P. Miller's attempts at comic relief, but if it was it failed badly.