I have never liked Chris Hardwick.

My main issue with Hardwick was his sycophancy towards those he claimed he and his organization, The Nerdist, to be reporting on.  He made himself the emblem of 'nerd culture', the cheerful, grinning face of Comic Cons everywhere, the 'fan who made good' and became a star in his own right, admired, respected, even perhaps seen as a bigger star than the ones he was perpetually kissing up to.

In reality, to me, he was a duplicitous part of the marketing machine, a poser, someone who touted himself as an expert on all things pop culture, specifically nerd culture (video games, sci-fi/fantasy shows, comic books/films), but who used his position to enrich himself by being at the beck and call of the studios to be a de facto promotional tool.

Yes, I would call Chris Hardwick a tool.

I found him odious in his gleeful cheerleading, refusing to ask tough questions and dismissing those who disagreed with him.

Now, we find that Chris Hardwick may have been more than just Marvel Studios' favorite fraudulent fan.

Chloe Dykstra, Hardwick's former girlfriend (emphasis mine, which I will get back to), posted an essay which details years of abuse and of deliberately blacklisting her in the entertainment industry.  She does not name Hardwick directly, but the details are hard to miss.

The unnamed boyfriend went from "a mildly successful podcaster to a powerhouse CEO of his own company".  Hardwick was a podcaster who now wields great influence through his 'many-headed beast', The Nerdist.

Dykstra refers to him as 'a cheery-sounding famous guy'. Hardwick's public persona is that of a perpetually grinning, upbeat man.

All signals point to this unnamed person being one Chris Hardwick. 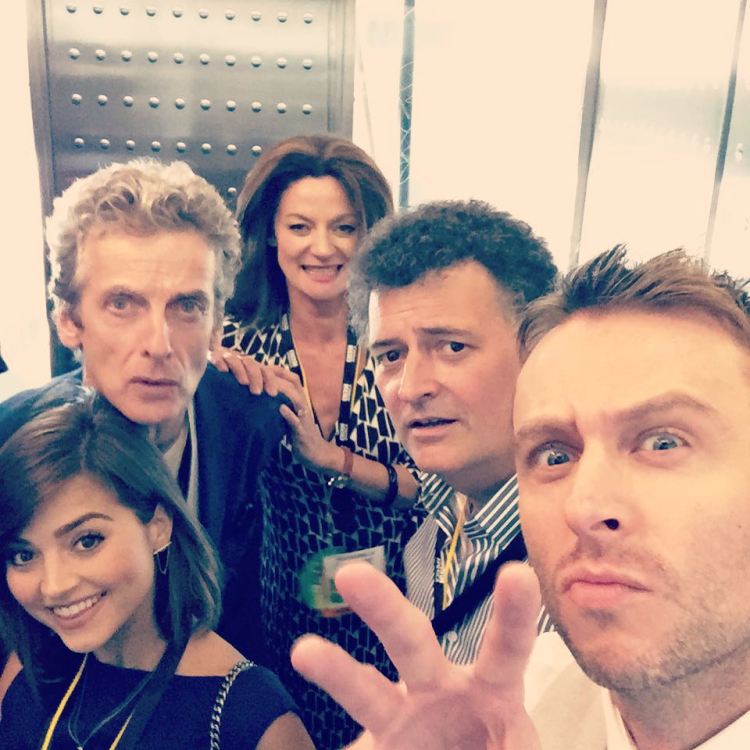 The details of Hardwick's alleged actions range from the boorish to the criminal.  According to Dykstra, he told her to drop all her male friends, to not leave her hotel room at a San Diego Comic-Con while he went out and partied with various beauties, and to serve as his sexual plaything, ready to indulge his desires whether she wanted to or not.

In other words, she had to have sex with him whenever he wanted, not whenever they wanted, which veers dangerously close to if not actual sexual assault as there was little to no actual consent on her part.

A particularly ugly charge regards when she is recovering after surgery for an ectopic pregnancy.

After being told she'd come out of the surgery fine, her mother thanks God.

Hardwick's first statement is, "That's great.  When do you think I can have sex with her again?"

While people get hung up on the sordid and sad details of Miss Dykstra's post, I think we need to look at another part which is getting lost in the tawdry bits.

According to her, after she left this toxic relationship after three years for another man, Hardwick "made calls to several companies (she) received regular work from to get me fired by threatening to never work with them. He succeeded. I was blacklisted".

That is criminal in a literal sense.

Hardwick, if this is true, deliberately sabotaged another person's career out of spite, using his influence to pressure others not to hire someone out of revenge.  This is something Harvey Weinstein, unintended Godfather to the #MeToo movement, would have done and may have done.

Hardwick used his connections, his name, his fame to keep someone else from finding a job and furthering her career.

There is no way of dressing this up if true.  What Chris Hardwick did to sabotage Chloe Dykstra's career, if proven true, is no different than what Weinstein did, or what any other Hollywood producer or bigwig did to make sure someone did not get work because they used personal influence against them.

What makes the charges, all of them, more appalling is how Hardwick presented himself publicly: as a woke male feminist, championing gender equality.

Take for example the 13th Doctor on Doctor Who.  Hardwick stood on a stepladder to look down his nose at anyone who had objections to why a female was cast as The Doctor, calling those who objected 'a**holes' and 'not real fans'.  On his @Midnight show, he went one better, insinuating they were losers and horror of horrors, virgins who in his words 'have never screwed anything'.

Given his own sexual appetites, it's no wonder he fixated on that.

As he dismissed and ridiculed those who had an issue with the reasoning behind this change, he was allegedly simultaneously forcing his own girlfriend to have no life outside him, serve as essentially his 'call girl', openly asking when she'd be ready to service him sexually after a traumatic experience and working to derail a woman's career once the relationship ended.

Over and over, as Hardwick promoted himself as both a major player in the industry and as a progressive friend to female representation, he appears to have worked to discredit a former lover.

That smearing continues today, when he issued his response to Dykstra's post.  He denies any assault, then he carefully adds that during the relationship 'Chloe had cheated on me, and I ended the relationship'.  He goes on to say that Miss Dykstra wanted to get back together and even start a family, but that he 'did not want to be with someone who was unfaithful'.

Not since Harvey Weinstein declared he was going to take on the NRA as a result of the various allegations against him has there been such a tone-deaf response.

It's classic victim-shaming.  She cheated on Me.  I was the victim.

Hardwick now is essentially saying the opposite of what he has said anytime anyone else, from Harvey Weinstein to Kevin Spacey to Bret Ratner to Louis CK to Charlie Rose to Matt Lauer to Al Franken to Jeffrey Tambor to Joss Wheadon even such seemingly-mild men as James Levine and Garrison Keillor among too many men has faced similar charges: always believe the woman.

For Chris Hardwick, it's "always believe the woman...unless the woman is accusing me.  Then she's just a bitter ex-girlfriend/'broad' (though I figure another word would be used)". 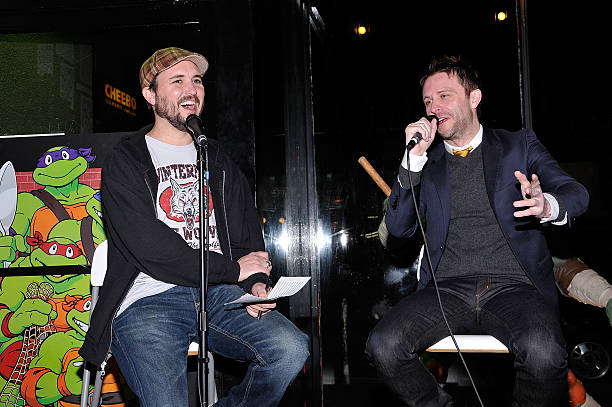 Perhaps because of his reputation as this woke male feminist, or perhaps because he represents to so many non-virgin nerds a cooler version of themselves, Chris Hardwick's #MeToo moment has become unique.

In all the time the #MeToo/#TimesUp movements have burst onto the scene, I cannot recall a time when someone was as vociferously and ferociously defended as Chris Hardwick.  I do not know why he, out of all those accused, has met this level of impassioned defense.

When Garrison Keillor, of all people, was accused of sexual harassment, Minnesota Public Radio wasted no time in firing him and going so far as to change the name of his former radio show A Prairie Home Companion to Live From Here to disassociate themselves from his alleged acts.

I don't remember people calling for 'due process' and insisting Keillor was 'innocent until proven guilty'.  I don't remember anyone doing the same for Tambor or Rose or Spacey or just about anyone else accused of sexual harassment/assault.

For Chris Hardwick, however, I keep seeing everything from 'we need to hear both sides' and 'he's innocent until proven guilty' to 'Chloe Dykstra is just getting back at her ex-boyfriend'.

It's puzzling to me why Chris Hardwick, of all those myriad of accused, is getting the greatest benefit of the doubt.

Let's say that instead of Chris Hardwick, it was Chris Pratt who was accused of what Hardwick is alleged to have done.  Hardwick and his BFF Wil Wheaton would be pushing others and each other out of the way to condemn Pratt, to say what a horrible person he was, to run him out of the industry.

Instead, Wheaton asks for 'time to process' before making any statements when it comes to Hardwick.  Fine, but Wheaton and Hardwick have constantly and consistently insisted we always believe the accuser when they make sexual harassment/assault accusations against others (since in at least Kevin Spacey's case, the accusers were men).

Instead, Wheaton, Hardwick and Hardwick's defenders were almost always the ones who would call for boycotts and protests and attack anyone who dared defend the accused. They have been consistent: always believe the women/accuser.

Now, it looks like when it comes to Chris Hardwick, it's 'always believe the women...unless they accuse someone you like or even identify with.  Then she's a liar'.

I wish I knew why, of all the men caught up in this maelstrom, Chris Hardwick is the one that has to strongest and fiercest defenders.

You cannot have it both ways.  You cannot call for someone's metaphorical head and then turn around and insist we 'hear both sides' just because you're a fan of one accused.  You Must Be Consistent.

If it had been Chris Pratt and not Chris Hardwick who was accused, and if you have always said 'always believe the accuser', then you must believe Chloe Dykstra and call for Chris Hardwick to go.

You cannot have it both ways.

P.S. I don't think anyone will accuse Chris Pratt of anything excepting giving bad performances.  I may think he's just a good action star and not an actual actor, but from all I've read and heard he also is a genuinely nice guy.
Posted by Rick at 1:52 PM