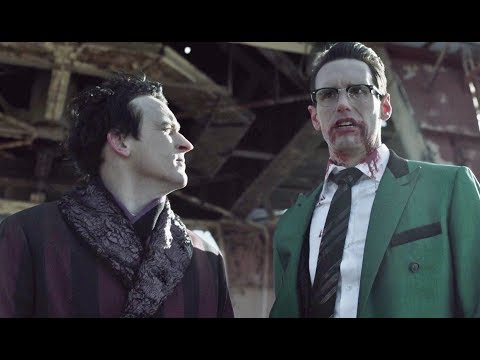 The Sinking Ship The Grand Applause has as its mantra 'The Enemy of My Enemy is My Friend', for the tangles of partnerships, frenemies and usual Gotham craziness makes for a remarkably packed episode, odd in that this is not the season finale.

Captain Jim Gordon (Ben McKenzie) talks his former partner, Harvey Bullock (Donal Logue) back onto the Gotham City Police Department.  He needs all the help he can get given how strong the hold Mafia Princess Sofia Falcone (Crystal Reed) is over Gotham.

Princesses, however, make many enemies.  Among them is Oswald Cobblepot aka The Penguin (Robin Lord Taylor), who now has an unlikely ally: Edward Nygma aka The Riddler (Cory Michael Smith).  As Penguin has helped Nygma find 'the Riddler within', they now forget all that's gone on between them to take down their mutual enemy.

Throw into this mix an even stranger ally: Dr. Leslie 'Lee' Thompkins (Morena Baccarin), still smarting in more ways than one from Sofia taking her down as the head of The Narrows and the hand-whacking that came with that.  Plans shift wildly as betrayals and assassinations go on left right and center.

Penguin gets Riddler to rescue Martin (Christopher Convery), the little boy Penguin has taken a paternal interest in, away from Sofia.  However, this appears to be part of a larger plan, though at times it seems poor Pengy keeps getting the worse for it.  Riddler finds that Solomon Grundy remembers himself as Butch Gilzean (Drew Powell), which means Solomon/Butch manages to get Riddler into the arms of The Sirens: Barbara Kean (Erin Richards) and Tabitha Galavan (Jessica Lucas).  Their plan is to turn Riddler over to Sofia to get him to tell where Penguin is. 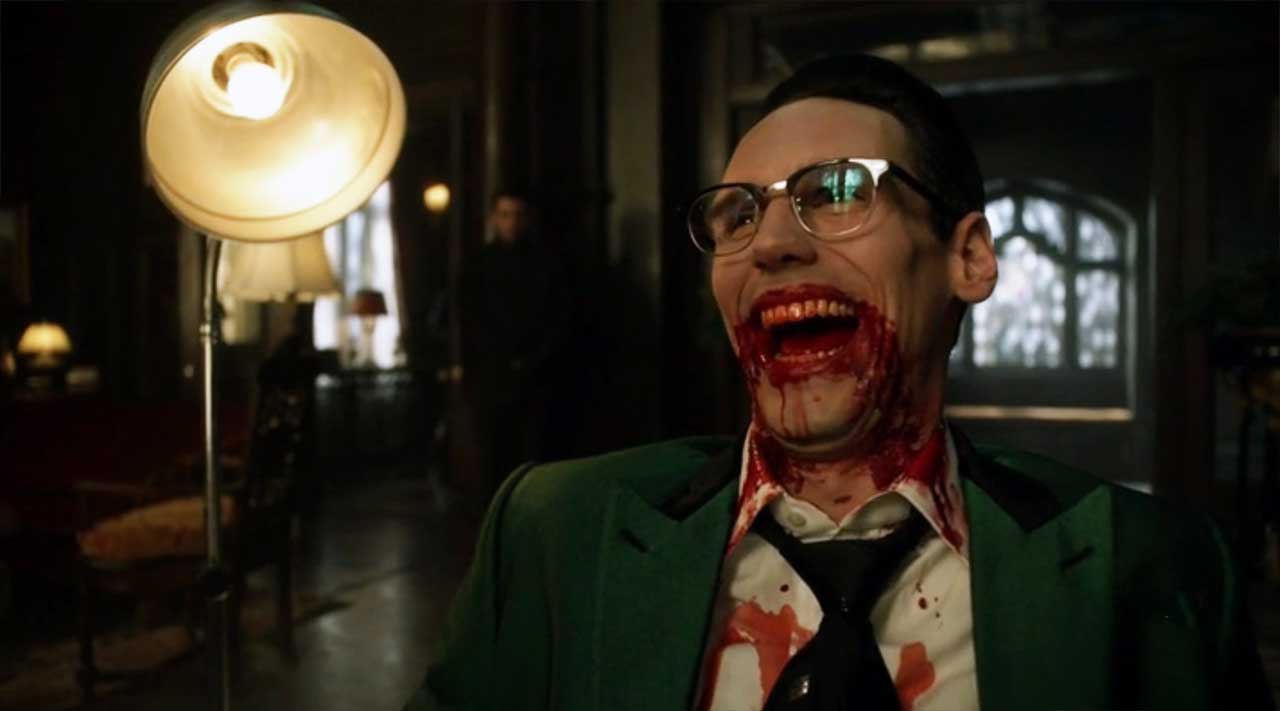 No need for that, for Lee opts to use Riddler's original plan: get Mr. Freeze (Nathan Darrow) to refrigerate Penguin as a 'gift' for Sofia.  Edward finds himself conflicted: delighting that Pengy now is where he himself has been, but also unhappy about it.  This, however, had been a rouse, as Penguin was programmed to free himself quickly.  He learns that Sofia has learned the whereabouts of Mr. Penn (Andrew Sellon), the accountant everyone is after.  He also learns that her goons will kill Riddler, and for once, Pengy faces a moral dilemma: go to where Penn is to kill Sofia or save Riddler.

Gordon and Bullock get to Penn first, having to face off against Sofia's assassins Victor Zsasz (Anthony Carrigan) and his own BFF, Wendell aka Headhunter (Kyle Vincent Terry).  It's a brutal shooting war, one where Gordon is shot several times.  In a twist, it's Sofia who ends up getting shot in the head by Lee, she coming to Gordon's last-minute rescue.  Another last-minute rescue is of Riddler by Penguin, who says that with Edward, he has indeed found someone he can trust, given that despite a great deal of torture, he would not give up Penguin's location.

In the subplots, Selina Kyle (Camren Bicondova), feeling guilt over the death of the Wayne Enterprises scientist, wants to get the jewels she had stolen from the family back to them. She turns to her own frenemy, Bruce Wayne (David Mazouz), who helps her with money as as muscle.  Their relationship continues to be one of Cat-and-Bat.  Barbara, for her part, has been suffering migraines, and at the end, has a frightening vision of yet again another frenemy, Ra's al Ghoul (Alexander Siddig), coming to her. 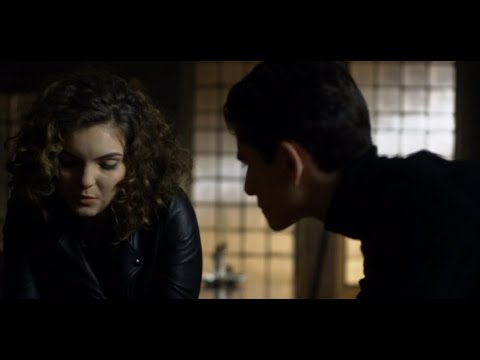 In The Sinking Ship The Grand Applause, there are many standout performances.  Gotham, in my view, is the best-cast series where every actor/actress seems not just right for the role but also continuously give excellent performances.  I will single out two actors in particular, though I should mention just how good all of them were.

One of those standouts in a group of standouts is a recurring character: Carrigan as Zsasz.  He continues to add a great subtle humor in his interpretation of the assassin.  Carrigan makes Zsasz almost into this if not innocent at least an unwittingly amusing figure.  His way with his lines, whether in telling people to face his wrath or in asking what his next job assignment is almost always shows that Zsasz is not just a cold hitman, but almost childlike in his manner.

Carrigan, in my view, simply has not been given enough credit for playing up the humor Zsasz has.

The second standout is Bicondova as Selina.  Her role was smaller than most of the main cast, but that is what makes it more impressive.  She showcases our future Catwoman as not a straight-up villain in the Riddler/Penguin/Barbara mode, but as an anti-heroine.  She has a conscience, she has a soul, and she knows right from wrong.  In her guilt and fear (such as asking Bruce to give the jewels back since she is too afraid to present her atonement herself), Bicondova reaches deep into making Selina a very sympathetic figure.

She has a great partner in Mazouz, who has made Bruce Wayne into a deeper, richer, more lived-in character.  We continue to see how this person will eventually become The Dark Knight as he fights alongside Selina against the fences who were trying to keep the jewels, but also see a young man still with heart and compassion towards this young woman he is drawn to physically and emotionally.

For my money, Taylor is my definitive Penguin, a man constantly beaten up.  There really is nothing better than to see this Pengy raging, but he too had his moment when he learns that Riddler has been sent to be killed.  We see that for once, he has doubts about whether to rescue someone, to put someone else over his own plans.

Smith, for his part, is my second-best Riddler, delighting in his wickedness but also finding himself shocked that the man he swore to kill and torture has now come to his aid.  Logue too makes Bullock more complex, still with some dry humor but also aware of his frenemy's flaws.  Baccarin makes the former gentle doctor into a figure of fear as she enacts her own revenge, and McKenzie rallies to make Gordon into an honest cop who struggles with his conscience on doing wrong to do right.

Reed too makes Sofia into this one whacked-out psycho, though she should know by now that 'monologuing' will be the death of anyone.

The only real drawback is that Darrow, my favorite Freeze, was not given much to do save for having an Obligatory Shirtless Scene.

Gotham this year has gone from success to success, and The Sinking Ship The Grand Applause has again hit another high-point.  If not for the weak use of Darrow and having Penn in a very bizarre baby-like setting which was a bit nutty even for Gotham, we might have seen the episode go all-out.  However, it did a fantastic job, with absolutely brilliant performances, lots of action and even a moment of humor and heart.

Next Episode: One of My Three Soups