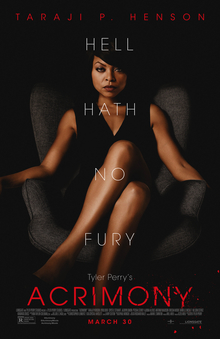 Acrimony for all its oddball craziness, is unique in film history.  It's perhaps the first time, at least that I can recall, where the filmmakers took the psychopath's side, where the clearly cray-cray character was made out to be almost sympathetic.

That does not make Acrimony particularly good, but neither does it make it as horrible as many of its detractors insist.  I found Acrimony to be good, whacked-out fun, trashy and almost comical, but entertaining if nothing else.

Told primarily in flashback with a forced therapy session as the present-day section, Acrimony is about Melinda (Taraji P. Henson), and her fraught relationship with Robert (Lyriq Best). Meeting in college, Mel is both drawn and repulsed by Robert.  He says he's an inventor, but to Mel, the only thing he invents is trouble. The day her mother is buried, Robert takes her virginity, though from how it looks, she was the more aggressive of the two.

Mel's sisters Diana (Crystle Stewart) and June (Jazmyn Simon) both object to the relationship, especially since Robert has no trouble taking Mel's inheritance piece by piece with Mel's consent.  Diana, the more aggressively opposed, keeps warning her sister about Robert, but Mel is too much in love.  Even after she catches Robert with another woman, which causes her to ram her Jeep into his trailer and a forced hysterectomy, she still marries him.

Cut to many years later.  Robert is still working on his battery and hounding a particular investor to fund his project.  Melinda is in danger of losing her mother's house despite working two jobs to Robert's none, due in part to a secret prison record.  Robert has finally after ten or twenty years been ordered to leave the investor alone, but not before he finds Brenda (Ptosha Storey), the woman with whom he had that fateful one-night stand.  Brenda now works as an executive with the investor, and Robert tries to play on her sympathies to get a meeting.

Despite all common sense, Brenda looks at Robert's past work and sees the Gale Force Wind Battery he has developed has potential.  By this time however, even Melinda has given up and agrees to stay with Robert only if he works for his in-laws in their food delivery business.

Who should call Robert to schedule a last-minute meeting with the investor just when he needs to make a major delivery or his family loses a major contract and their trucks, possibly ruining the family business?  Robert puts himself first, causing the family to lose their mother's home and Melinda pushing for a divorce.

Things, however, take an unexpected turn after the divorce.  Melinda is still angry about everything, and even the sight of Robert washing dishes does not thrill her.  If she knew he had to live in a shelter, it wouldn't have assuaged her fury either.  Just when things are at their lowest, Brenda returns to find Robert, as she has pulled in new sources of capital that will allow Robert to hold on to his notes and be the sole owner.

The deal makes him a multimillionaire, and as a way of atoning for his past mistakes he sees Melinda, giving her a ten million dollar check and the deed to her mother's house.

This, however, still feeds the rage of Melinda when she finds that Robert has moved on to Brenda, and worse, that Brenda was the ho he had hooked up with all those years ago.  Now she sees Brenda living the life Robert had always promised to her: the apartment on the top floor of the riverside building, the yacht, the fancy wedding and the diamond ring.

Her sisters and best friend Sarah (Danielle Nicolet) keep trying to get Melinda to move on, but now Melinda wants to retake her place as the rightful heiress, or at the very least, make sure she gets what she thinks she's due.  Up alone in her home, she stalks them online and generally goes bonkers: at one point, she manages to burn Brenda's wedding dress.

All this we learn at the court-ordered therapy session, but she leaves without resolving anything, and somehow manages to crash the wedding, sneak onto the yacht and try to kill everyone.  Melinda, however, literally gets dragged down to her death.

I think Tyler Perry, who wrote and directed Acrimony, has a very curious moralistic streak, where giving in to the pleasures of the flesh leads to death and destruction, and always for the woman.  It's something that he hits on over and over again, even to a point in his Madea films.  The best of them in my view, Diary of a Mad Black Woman, had a subplot where one woman was a drug-addicted ho and it was only when she returned to the church that she found salvation and love with her estranged husband.

It might be interesting to look at Tyler Perry's oeuvre and see if he does have certain themes that he works on again and again.

Also, they both feature a steamy shower sex scene.

Oddly, both Temptation and Acrimony have characters named 'Melinda'.  Tyler Perry might have some serious issues he needs to work out with a therapist, hopefully not named 'Melinda'.

Despite his best intentions, one cannot leave Acrimony with any sense that Melinda was a wronged woman.  Instead, she comes across as shockingly dumb, signing off her money whenever Robert just hinted at it.  The film is almost protective of Robert, his one indiscretion being the only really bad thing he does.  He does this even when we have that unbelievable sequence where his shot at pitching his battery comes at the exact same time he needs to make a major delivery or bring his extended family to ruin.

Personally, I think this is something that happens only in the movies, but I digress.  Here, it isn't presented as Robert being selfish and thoughtless, or even asking if the meeting can be set up another time.  Instead, in having Robert quietly try to explain and showing him having regret about it all, Acrimony wants us to feel for him, not his long-suffering wife.

Granted, we generally aren't supposed to sympathize with the psycho, but Acrimony seems to want us to by showing all Melinda endured and seeing the life she was promised instead given to another.

Interestingly, Acrimony reminded me of the Betty Broderick story, which was made into two television films: A Woman Scorned and Her Final Fury.  This sordid story of an ex-wife gone crazy or vindictive enough to kill her ex-husband and his pretty young wife over having 'her' life stolen is eerily similar to certain aspects of Acrimony.

After her great triumph in Hidden Figures (for which I think she was shamefully overlooked at the Oscars for the song-and-dance shtick of Emma Stone), it's hard to see Taraji P. Henson reduced to such silliness as Acrimony.  I think Henson knew Acrimony was not worth her time, so she decided to make it a bit camp.

That's the only way to explain her 'Crazy Dance' as she descends into psychological meltdown at seeing the online acts of Brenda and Robert, complete with red tinting to show her falling into Hell.  It's actually pretty hilarious rather than terrifying, but only Perry and Henson know if that is what they were going for.

Almost everyone else in the cast was playing his/her character in the same note.  Diana was always angry, June was always accommodating, Sandra was always upbeat.  Brenda was the only one who seemed to behave rationally and have some kind of arc.

Despite all of its flaws, I found Acrimony quite entertaining in a cheap thriller way.  It almost played as a spoof of these type of 'wronged woman gets revenge' thrillers. I cannot fault a film for living down to expectations, and while Acrimony won't enhance the reputation of anyone involved with it, it's not a bad way to spend a couple of hours.

You do marvel at how bonkers it can all get, and that is entertaining.