Gotham: One of My Three Soups Review 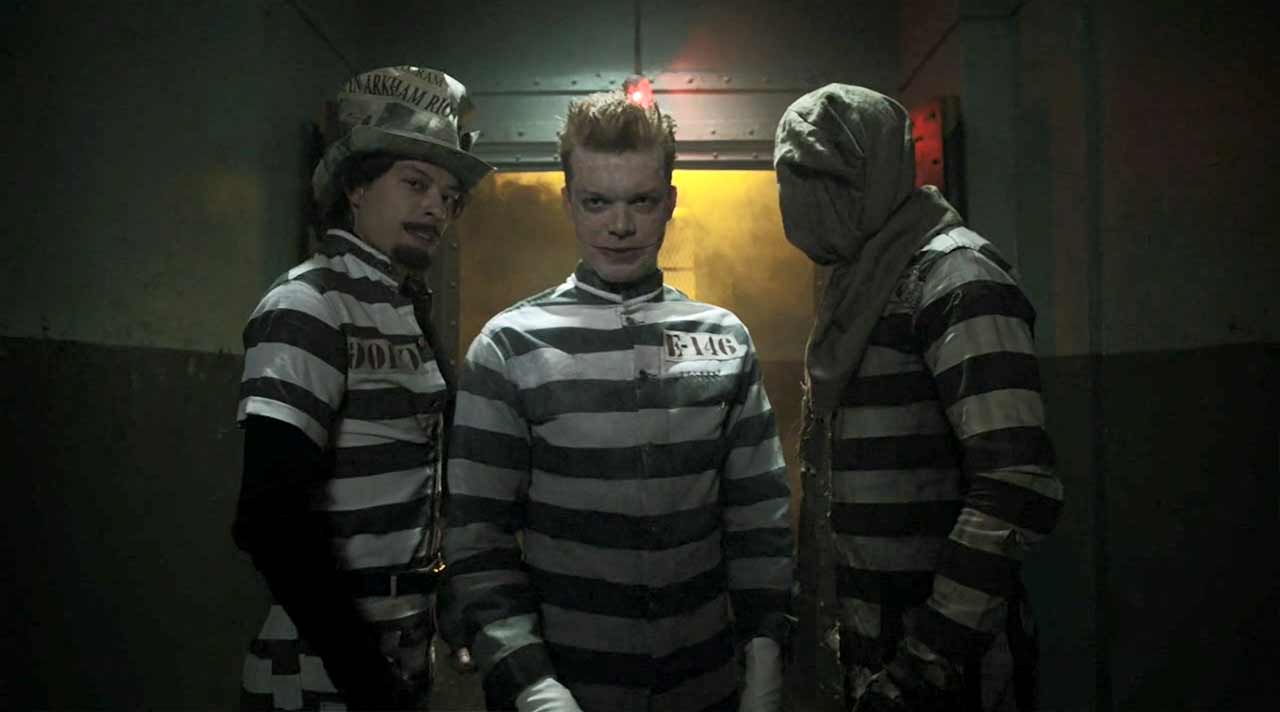 GOTHAM: ONE OF MY THREE SOUPS

Last time on Gotham, we had one of the best episodes that seemed to fill so much within its short time frame.  This time, with One of My Three Soups, we seemed to fill up so much time with very little.  It was not not a terrible episode, but it just seemed to be an introduction to a larger story where despite what should be a lot of tension and danger, I really felt nothing.  For me, One of My Three Soups was all sound and fury, signifying something, but not much.

The triumvirate of Jonathan Crane (David W. Thompson) aka The Scarecrow, Jarvis Tetch (Benedict Samuel) aka The Mad Hatter, and Jerome Valeska (Cameron Monaghan), maybe The Joker, maybe not (Gotham so far is teasing but not never confirming) have joined forces to escape Arkham Asylum.  In the ensuing chaos of letting all the inmates out, that should keep Captain Jim Gordon (Ben McKenzie), his loyal Detective Harvey Bullock (Donal Logue) and the rest of the GCPD busy while they work in tandem on a much larger plan.

Tetch seems to take the lion's share of this scheme, hypnotizing citizens via the radio to go up to the roofs and commit mass suicide at midnight.

Is it me, or have we seen this scenario before somewhere?

Jerome, for his part, wants information from his sleazy Uncle Zack (John Treacy Egan).  For once, though, Jerome finds himself outwitted by his Uncle.  The owner of a dive diner, he had prepared three soups: one too hot, one too cold, one just right.  However, this was no offbeat homage to Goldilocks.  The cold soup was for Zack. The just-right soup was for the strongman Zack brought for protection once he heard his nephew had escaped.  The hot was for Jerome, whom Zack intended to torture and kill.

Pity that Bruce Wayne (David Mazouz) decided that killing Jerome was the wrong thing to do.  Determined to bring him in, he interferes, much to Jerome's delight.  Is Jerome thankful?  No, for he still wants to kill Bruce, and it's only the interference of Selina Kyle (Camren Bicondova) who saves Bruce.

Ultimately, Gordon manages to find a way to stop the mass suicide in about the only real clever moment of the episode.

In the very minor plot, Barbara Kean (Erin Richards) discovers the powers she has within her that Ra's al Ghoul (Alexander Siddig) gave her.  She is now the Demon Head, able to command a squad of assassins known as the League of Shadows.  Some don't like the idea of a woman being in charge, but she subdues them, only to have the female assassins kill those who knelt before Barbara.

Point One for Female Empowerment and Representation.

Again, One of My Three Soups was not a horrible episode by any stretch.  I just felt there was nothing there, especially after the run of thrilling episodes we've had of late.  I think that it was just a way to set up future stories.  There's nothing wrong with that per se.  However, unlike other episodes I just never felt there was any real tension or suspense.

I admit that Gordon's method of saving everyone was clever.  Tetch had hypnotized them to where if anyone received counter-commands to not jump, they'd jump sooner.  "I can't save you," Gordon sadly says over the airwaves.  "Save each other".  To the surprise of Tetch and everyone, the moment they're all supposed to jump, they end up stopping the person next to them from jumping.

That was an order Tetch had not counted on, and that saved everyone including Bullock, who sacrificed himself to find the right radio station and thus, getting himself hypnotized.

However, this seemed to come from more a place of frustration and resignation than any intellectual conclusion from Gordon.  This is how McKenzie performs this scene: rather than have Gordon come up with this brilliant resolution, he almost stumbles upon it.

Mazouz and Bicondova continue to be standouts, more her than him and that's only because she at least has conflict when facing off against Jerome.  Mazouz here makes Bruce almost into a scold, though to be fair his scene at the Gotham City Police Department HQ was good.

One of My Three Soups also suffers from a cacophony of villains, almost all of whom really had too  little or too much to do.  Jonathan Crane got the shortest stick, as he seemed to barely be in the episode.  Samuel loved vamping it up to full force as Tetch, but this time it seemed so wildly over-the-top as to come across as cartoonish than menacing.

Monaghan has a very difficult task: to be and not to be The Joker while also pushing away comparison's to his generation's definitive take on The Joker: Heath Ledger.

For better or worse, all future Jokers, especially for Gotham's main viewing audience, will be held to comparison with Ledger's version from The Dark Knight.  I imagine most Gotham viewers barely remember Jack Nicholson's version, let alone Cesar Romero's camp Clown Prince of Crime, so their only point of reference is Ledger, and Monaghan is doing a variation on Ledger.

It is so hard as to be virtually impossible not to see Monaghan doing a Ledger variation with his maybe/maybe not Joker, but bless him for trying to find his own stamp on things.

One thing that especially troubled me was the violence, which is something I have commented and criticized the show on.  From the opening with a guard's throat slashing to having a hypnotized married couple crushed to death by a construction ball, it was far too gruesome. Oddly, the show restrained itself when we had the League of Shadows massacre, and that was done through lighting effects.  That was good.  The delight in the slaughtering wasn't.

One of My Three Soups left me slightly cold and bored.  It's almost something we had to go through to set up a larger story.  That may be the right course, but there really wasn't much to keep me interested this time.

Next Episode: Mandatory Brunch Meeting
Posted by Rick at 9:49 AM