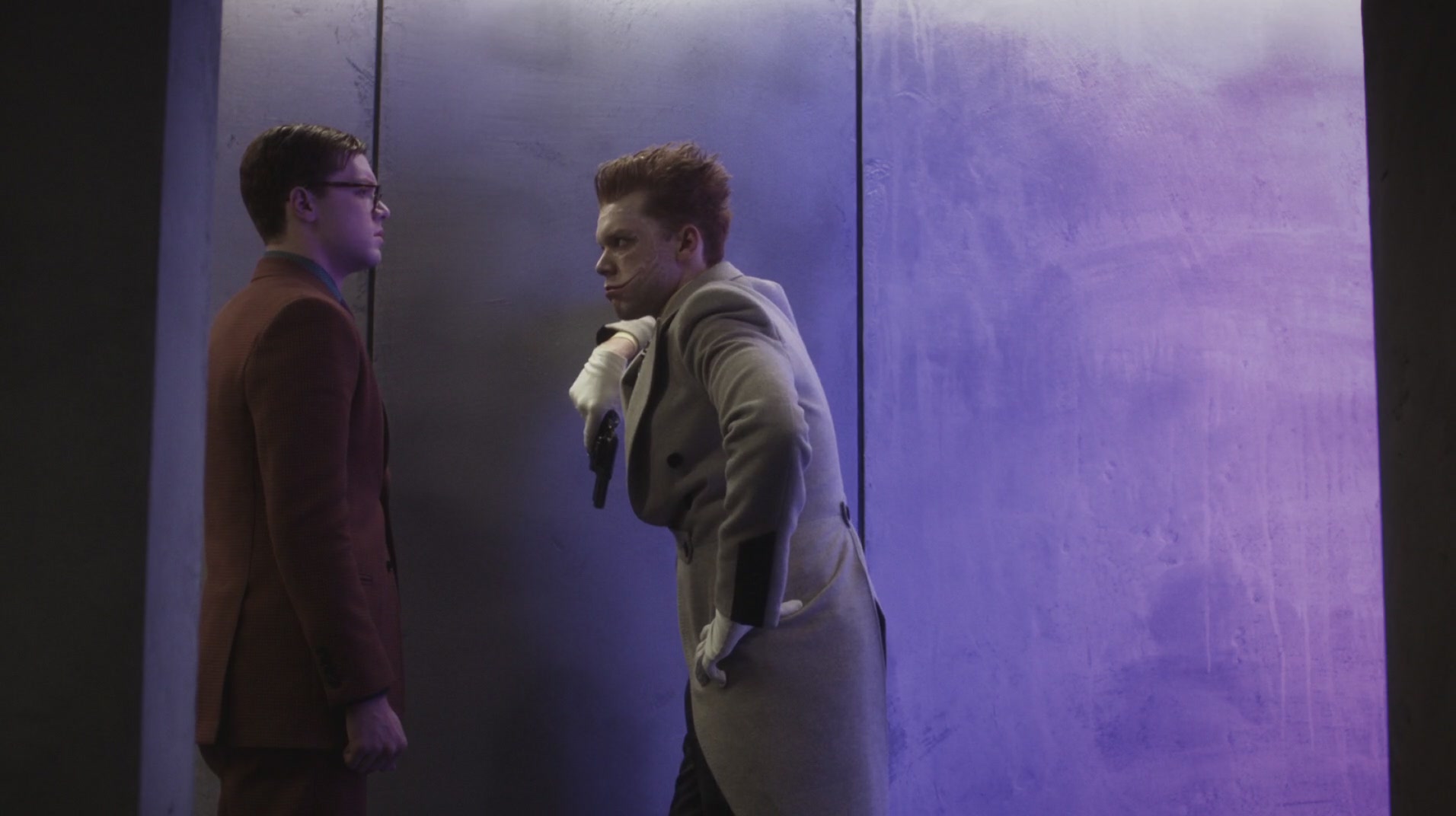 I was not particularly overwhelmed with Mandatory Brunch Meeting but not because it was in any way terrible.  It had some nice touches, but it also has perhaps some cliched ideas.

Basically, we have two stories running simultaneously.  The main story involves Jerome Valeska (Cameron Monaghan), whom Gotham is still playing coy about whether he is or isn't The Joker.  His master plan involves finding one Xander Wilde, a reclusive structural engineer.  Why Jerome is on this mad hunt slowly reveals itself to Captain Jim Gordon (Ben McKenzie) and Detective Harvey Bullock (Donal Logue), or as Jerome calls them, 'Jimbo and his bearded sidekick'.

As part of Jerome's plan to unleash chaos in Gotham City, he calls a meeting of what he dubs 'a Legion of Horribles', with the help of Oswald Cobblepot/Penguin (Robin Lord Taylor).  Pity he opted not to call them 'a basket of deplorables', but there it is.  Jerome has no interest in taking over the underworld, leaving that up to Penguin or anyone else interested in taking over the criminal enterprises.  Jerome's plans do involve a collection of villains along with Pengy; there are his fellow Arkham inmates Jervis Tetch/Mad Hatter (Benedict Samuel) and Jonathan Crane/The Scarecrow (David W. Thompson), along with two figures we simply don't see enough of.  That would be Bridgit Pike/Firefly (Michelle Veintimilla) and Victor Fries/Mr. Freeze (Nathan Darrow).

For once, Jerome is the one caught thanks to Echo (Francesca Root-Dodson), Xander's proxy, who delivers him to Xander and is placed in a labyrinth.  Gordon and Bullock find Xander, and are shocked to find that Xander is really Jeremiah Valeska, Jerome's twin brother.  No surprise that Tetch and Crane manage to get to Echo, but Jeremiah is saved by Gordon & Bullock and taken into protective custody, meaning he goes to the GCPD HQ, which has proven time and again to be the worst place to take anyone in need of saving. 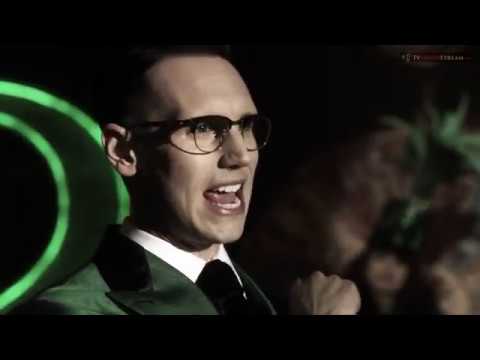 The second plot involves Edward Nygma, who is now fully immersed as The Riddler (Cory Michael Smith). He is hosting a game show in The Narrows, Riddle Time, where contestants can gain a fortune if they do two things: answer The Riddler's riddle correctly and stump The Riddler with a riddle of their own.  Get either portion wrong and The Riddler gets to 'spin the wheel', disposing of the loser by the method the wheel lands on.

In comes Dr. Leslie 'Lee' Thompkins (Morena Baccarin).  She wants this wicked game stopped, and to do so accepts to be the next contestant.  If she wins, he has to end the game.  If she doesn't, The Riddler gets to kill her.

The Riddler, for once, has met someone who is not just on an equal intellectual level, but who manages to outwit him by playing him off his alter ego, Ed.  It's a strange game of seduction between these two as they battle it out.

Again, Mandatory Brunch Meeting is not terrible.  However, some things you just kind of wonder about.

My first issue with it is the violence.  This is the second Gotham episode, at least that I can remember, where we see someone blown up.  The violence on Gotham has been a very sore point with me, and this is still something that continues to play havoc with me.  Granted, violence on Gotham should be expected, and the suicide bombing is part of the plot.  However, I still hold that a more subtle manner can be found to show without showing someone blown up.

My second issue is with Bruce Wayne (David Mazouz) and Alfred Pennyworth (Sean Pertwee), who essentially disappear from Mandatory Brunch Meeting as soon as Gordon tells them to stay out of the investigation.  I figure we will see them in a future episode, but given how Gordon and Bullock managed pretty good detective work on their own, why hint about something that won't happen?

Third and last is Penguin.  I am not sure why Gotham opted to have Pengy go for some weird A Flock of Seagulls meets RuPaul's Drag Race get-up, but Oswald's ensemble and hairdo looked like something a little too outlandish, even for him.

Pengy has had curious wardrobes and hairstyles, but this look is pretty bonkers even for him.  It isn't exactly distracting, but there's something to be said when in a room with The Scarecrow, Mr. Freeze and Firefly, you manage to look even crazier than all of them.

How Jerome managed to rope in Firefly and Mr. Freeze, who again are perpetually underused, especially Freeze, we know not.

I confess to not being crazy about the 'lost twin brother' bit, and the teasing of 'Is Jerome the Joker or not?' is starting to wear thin.  With Monaghan's version of Jerome quoting The Killing Joke graphic novel's idea of 'we could go insane with one bad day', we keep getting hints Jerome might be our notorious villain.  Monaghan's version, drawing heavily from Heath Ledger's Joker from The Dark Knight, keeps pushing that idea.

And yet, Gotham continues this fan-dance about Jerome, and what if Jeremiah ends up as our Clown Prince of Crime?  That remains to be seen.

There were some great things in Mandatory Brunch Meeting.  Of particular note was the cinematography, which has always been Gotham's greatest technical achievement.  Smith, though part of the B-plot, was excellent as The Riddler, reveling in the grandiose nature of the character.  Monaghan got that dream bit of playing polar opposites in the same scene, and he did quite well.

Mandatory Brunch Meeting was good not great, but how this story-line goes is still something that as of yet I don't know.  Still, it is a good buildup to something that I trust will pay off.

Next Episode: That's Entertainment
Posted by Rick at 1:44 PM