Well, in the eternal dance of whether Jerome Valeska is or is not The Joker, we seem to have come up with a definitive answer.

And that's with Jerome's apparent end.

That's Entertainment, like Jerome's plan, seems a stall for time before moving on to hopefully bigger and better things.  It also seems a weird rehash of the 1989 Batman film to where one wonders if anyone in the production wasn't aware of it.

Jerome the "not" Joker (Cameron Monaghan) has abducted the interim Mayor, the Commissioner, the Catholic archbishop and the head of a 'good society' organization as part of a major plan.  That plan involves blowing the heads off each of these hostages until his demands are met.

Those demands are that his twin brother Jeremiah (Monaghan in a dual role) and Bruce Wayne (David Mazouz) be brought to him.  Captain Jim Gordon (Ben McKenzie) is reluctant to do that.  For once, Bruce's valet Alfred (Sean Pertwee) and his on/off gal-pal Selina Kyle (Camren Bicondova) agree that Bruce shouldn't do it.  Bruce, however, believes it is the right thing to do.

All this is actually just one part of an even larger scheme that Jerome has cooked up with his Legion of Horribles: Mr. Freeze (Nathan Darrow), The Mad Hatter (Benedict Samuel), Scarecrow (David W. Thompson) and Firefly (Michelle Ventimilla).  Their plan is to unleash Scarecrow's madness gas on the citizens.

For once, however, one of the criminal masterminds, Penguin (Robin Lord Taylor) is horrified when he finds out the entire scheme.  He does not want anything to do with all this madness, but Jerome already knew he was wavering.  He has Pengy put on the blimp that will release the gas to see them all die.

Gordon, however, with help from Lucius Fox (Chris Chalk) and even from Pengy manages to stop the slaughter.  However, at long last, Jerome appears to die from a combination of getting shot and falling off a building. 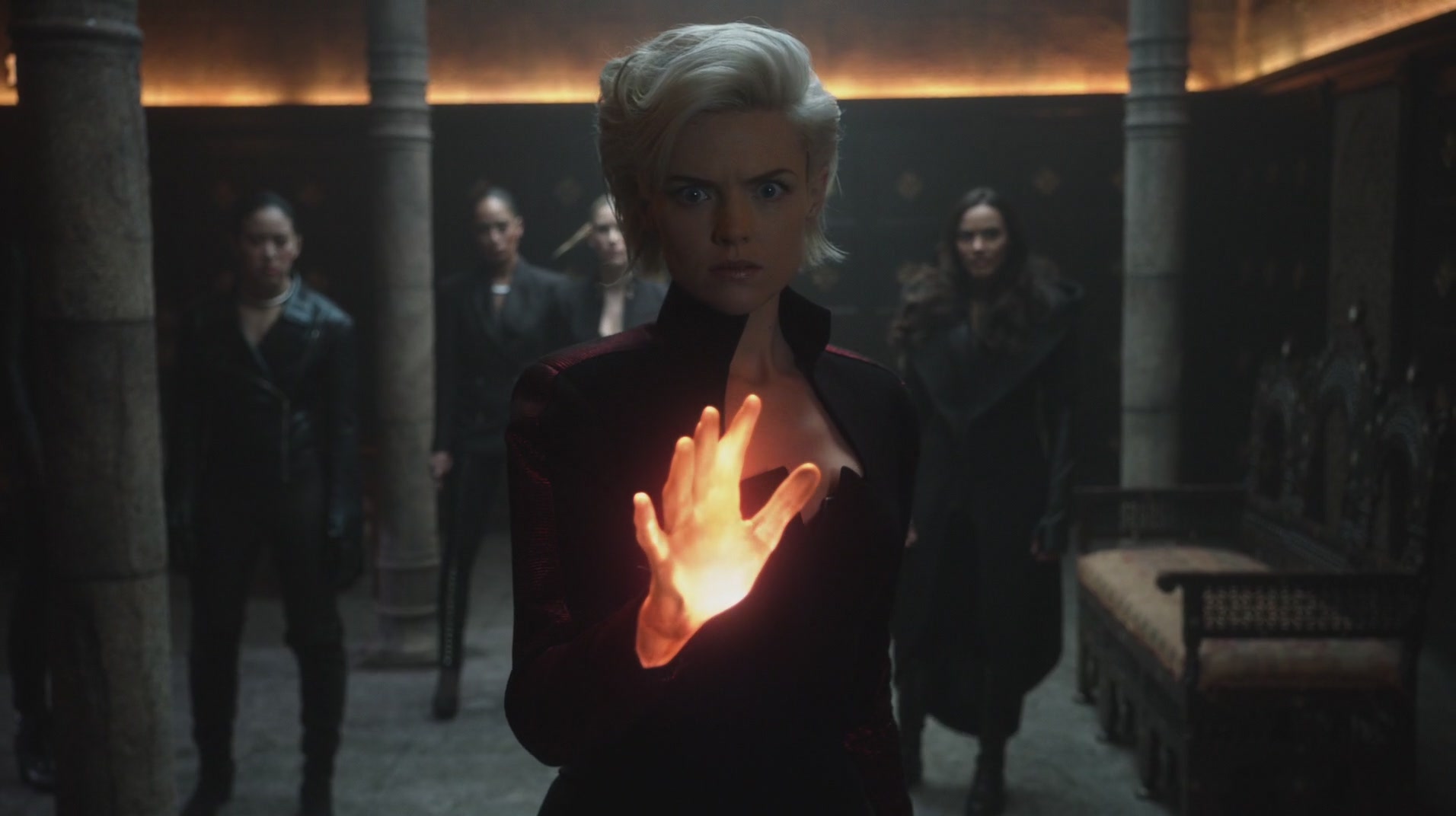 In our subplot, Barbara Kean (Erin Richards) is still feeling her way with her powers as the Demon's Head. Power, along with her League of Assassins' Amazonian Guard, goes to her head.  Bonkers Babs now has convinced herself she is a virtual goddess, but she wants to use her powers to merely enrich herself.

This does not sit well with Tabitha (Jessica Lucas), who thinks the whole thing is deranged, even for Bonkers Babs.  As befits a goddess with a private army, Babs dumps Tabitha and has her thrown out.

However, there is hope on the horizon, for a renegade group of League of Shadows group want to remove Barbara, and take Tabitha with them as part of a secret plan.

As I mentioned, I said the answer to whether Jerome is 'the Joker' is definitely maybe only because in what is meant as a surprise, Jeremiah has been given a special brand of Scarecrow's toxin that seems to have made him bonkers too.  As such, it seems that the entire character of Jerome was just one long con, and the 'twin' a convenient way to keep things going.

I don't think it is particularly original to have the twin essentially take on the other's role, especially since Monaghan was playing a variation on Heath Ledger's iconic take on the Joker.

I have stated many times how no actor following Ledger in the role of The Joker can ever escape his shadow, and while Monaghan has done a great job as the proto-Joker, he still faces that daunting task of following in Ledger's footsteps.

Monaghan has shown his range with playing these dual roles, but it is interesting that for the idea that this is a Legion of Horribles, there was really room for only two of them: Jerome and Penguin.

Nothing shakes my belief that Robin Lord Taylor is among the very best things in Gotham, and That's Entertainment shows what mastery he has on the role of Oswald Cobblepot/Penguin.

We see something we haven't seen from Pengy: actual human emotion divorced from his drive for power or revenge.  He's willing to go along with any crime that gets him either, but the wholesale slaughter of people just for the 'joy' of killing is one bridge he cannot cross.

In his fear of this madness down to the comedy of seeing Pengy attempt to fly a blimp and frustration of being stuck on it after all this has happened, RLT shows he can handle both drama and comedy so well.

Let's face it: what can be funnier than seeing that Penguins CAN Fly!

It's a shame that the other members of the Legion had smaller roles, though they did them well.  I do wish Darrow's Mr. Freeze had a larger role, but one can't top his entrance to the Wayne Enterprises' lab.

Fair warning: the cinematic nature of the raid was fantastic, but it could cause epileptic seizures with all the flashing lights to where I think a warning should have been made.

Another warning should have occurred with regards to a longstanding issue: the violence.  Even with the shaky-cam and quick cuts, we can see people's heads explode, and I still am highly troubled by this.

We still see a strong group of performances: McKenzie's steely Gordon, Bicondova's Selina, our anti-heroine, Donal Logue's quippy Bullock, Mazouz's moral Bruce.  He and Bicondova make such a wonderful pairing that I'd be happy with a show about Bat-Cat separate from everything else.

As for the subplot, Richards has not failed ever since she went from bland Barbara to Bonkers Babs.  It isn't her fault that the subplot itself is pretty wild even for Gotham.

There were other issues apart from the violence in That's Entertainment.  The plot bears a striking similarity to Batman (the poisoned gas, the 'Joker' falling to his death, even the gift).  The gift itself is so obviously in Jerome's taste that Jeremiah must be stupid to not think his twin would not be behind it.

That's Entertainment had some good performances that lifted it slightly from the story that seemed filler for a larger plan.  I can't fault it for that, although it is still troubling in its graphic nature.

Next Episode: To Our Deaths and Beyond
Posted by Rick at 2:30 PM