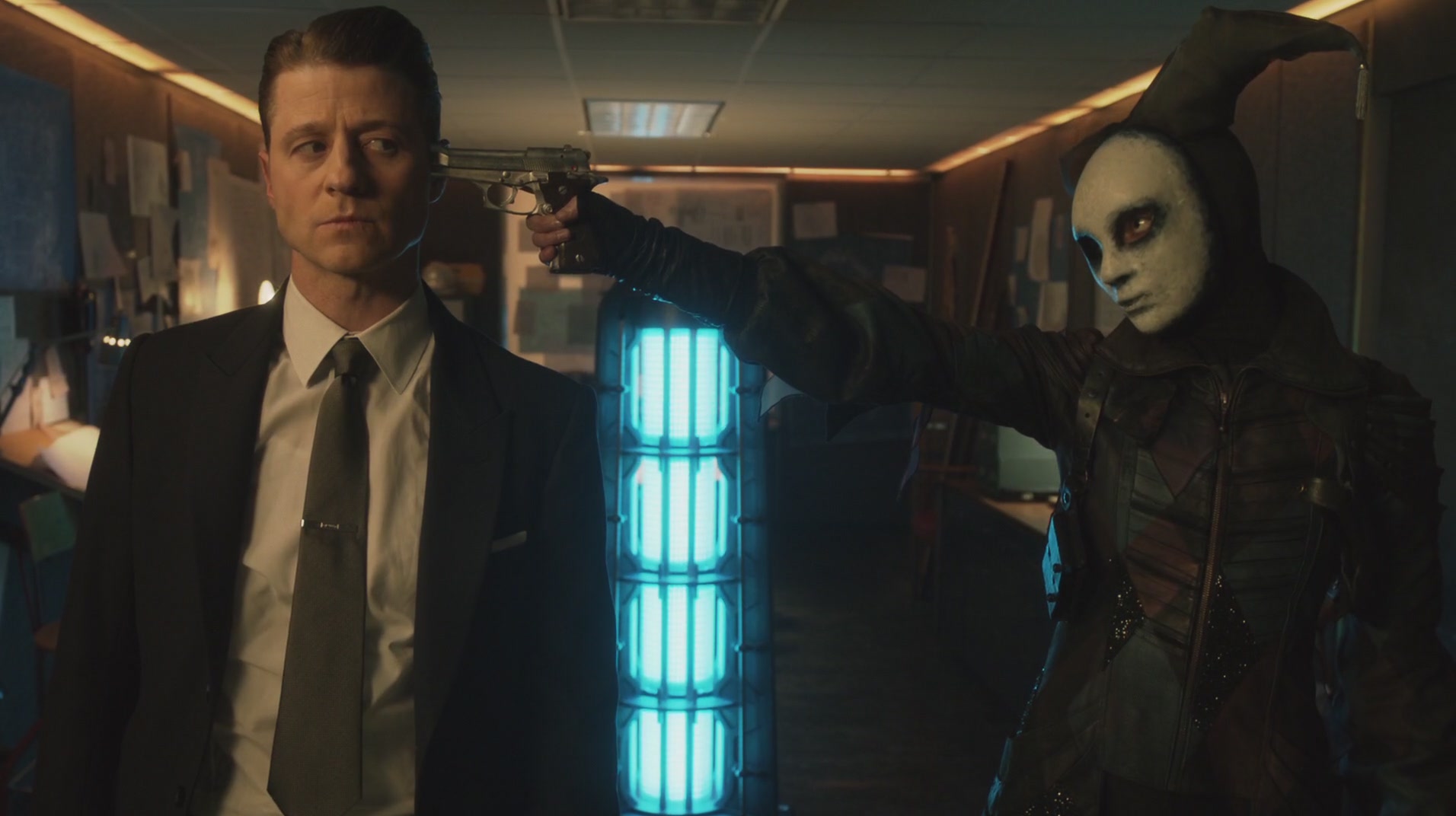 I guess when it comes to That Old Corpse, it is not so much the suspension of disbelief that blocks me from thinking well of this Gotham episode. It is the fact that a lot of it involves a lot of cliches, particularly the evil masterplan that requires everything to go exactly right, down to the variables.

That and yet another siege/takeover of the Gotham City Police Department Headquarters.  It's almost by now a parody of Gotham: the GCPD HQ is routinely attacked or besieged to where one wonders why it is the least defended place in all Gotham.

The followers of Jerome Valeska, the self-dubbed 'Clowns', have received a message from their leader from the Beyond, ordering them to attack the Gotham City Police Department Headquarters.  Captain Jim Gordon (Ben McKenzie) by now sees that anytime Jerome has some plan, it is really just cover for something else.  All he needs to do is find what that 'other' is.

As expected, the Clowns' assault happens, but this time the GCPD takes a more defensive posture, allowing for them to ransack the place in a strategic retreat.  Gordon soon puts together that the real targets are Jerome's twin brother Jeremiah (Cameron Monaghan) and Bruce Wayne (David Mazouz).

Bruce has funded Jeremiah's new self-contained power source, but Jeremiah also reveals to Bruce about the toxin he's infected.  Bruce attempts to convince Jeremiah that Jerome really is dead, but it looks like Jeremiah is having a breakdown.

As it happens, it is all a rouse, for now Jeremiah is the insane one and with Bruce's unwitting help, he has created a set of bombs.  Jeremiah, it seems, is taking on Joker-like manners.


The (latest) siege of the GCPD HQ comes at a bad time for Edward Nygma/The Riddler (Cory Michael Smith). His plan to rescue his frenemy Dr. Leslie 'Lee' Thompkins (Morena Baccarin) from there meet this unexpected battle.  Mindful that Lee is opposed to killing, Nygma cooks up a new scheme to rescue her.

It appears that Lee does return Ed's affection, but in the initial chaos of the attack, she hits her head on a fire extinguisher.  What effect this has on her remains to be seen.

In all this madness the buddy team of Oswald Cobblepot/The Penguin (Robin Lord Taylor) and Butch Gilzean (Drew Powell) smell an opportunity, though an opportunity for what is unclear.  All that is known is that Penguin is desperate for money to get back in power and for Butch to return to normal.

I have always been wary of plots where the criminal mastermind plans things so perfectly that everything goes according to what he/she plots, even down to the actions others will take.  Such things, I find, really are beyond any villain's control no matter how well-planned and thought out the plans are.

It simply requires far too much to have everything go exactly right, for I find that little things, right down to a few minutes' delay or a wrong turn or someone not reacting a certain way can happen.

That Old Corpse is one of those stories where Jeremiah planned everything exactly right, down to how others far outside his sphere would react.  I just reject such things as too unbelievable.

I guess I would have liked it if Jeremiah had gone bonkers through his own initiative rather than through Jerome's powers, the mental collapse being more terrifying and the twist more shocking.  Here, you were waiting for it.

As the Clowns used Jerome's coffin as a battering ram to storm the GCPD HQ, all I kept thinking is, 'what if Jerome had been cremated or buried at sea (or the Gotham River)?'  How then would Jeremiah's masterplan work? What if Bruce didn't come alone, or Gordon focus on the siege?

I get antsy when I see a plan that has so many variables that still goes exactly as one wants them to.  I don't accept the premise, or at least that it all go so perfectly.

That took away some of my enjoyment of That Old Corpse, but there were other aspects too.

One was the comedy.  Unlike the last episode, That Old Corpse was more blunt in its use of humor which while still somewhat amusing didn't seem to flow well.  There are two scenes where both The Riddler and The Penguin open a paddy wagon to look for Lee and the Head Clown Jongleur (Christian Rozakis) respectively.

One of the criminals looks up to see them and exclaims, "The Riddler/The Penguin! We're saved!" only to find both leave the lot of them there.  After Penguin slams the doors on them, another criminal looks at the first and deadpans, "Aren't you tired of being wrong?"

The scenes made me chuckle, but they also made me roll my eyes a bit.

I also wondered how many sieges of the GCPD HQ this makes.  Seriously, I wish the Gotham writers would stop resorting to bands of crazed villains constantly attacking the Police Department Headquarters.

It's pretty much been done to death.

Acting-wise, That Old Corpse did well.  There was more comedy from RLT and Powell that made them a very odd couple.  The drama came from Monaghan and Mazouz, especially when the former appeared to be terrified his twin was still alive.  Their work lifted the episode, as did Baccarin, who showed her sultry side that might be merely teasing Riddler.

CMS had a good line when he cracks that he'd rather debate people on a semantics point than allow Lee to be in the hands of "that overgrown Boy Scout (Jim Gordon)".

That Old Corpse was by no means horrible, but so much of it was predictable and repetitive.