When The Love Boat Met The Poseidon Adventure...

I was not fond of Titanic when it premiered.  I thought it was long, slow, boring and devoid of anything good apart from the actual sinking.  Now, twenty-one years later, I revisit Titanic to see if time has either softened or hardened my views.

To my surprise, I have softened when it comes to Titanic. Unlike the last two times I saw it (when it was first released and maybe ten years later), I didn't shout, "JUST DIE ALREADY!" as our leads are floating in the water. I also was more moved by certain things in it. However, I also noticed more flaws within it that I hadn't seen before.

Arrogant underwater explorer/treasure hunter/scavenger Brock Lovett (Bill Paxton) is searching the wreckage of the RMS Titanic for a legendary blue diamond thought lost in the sinking: The Heart of the Ocean. So far the search has come up empty, but he hits a surprising clue when he discovers the safe of its last recorded owner. He finds a drawing of a nude woman wearing The Heart of the Ocean, and the drawing is dated April 15, 1912, the date the ship sank.

A news report on the drawing's discovery attracts the attention of one Rose Dawson Calvert (Gloria Stewart), who contacts Lovett and asks, "I was just wondering if you had found 'The Heart of the Ocean' yet, Mr. Lovett". Lovett, astonished that this 100-year-old woman knows about the diamond, asks how she knows about it.  Simple, she replies: the woman in the drawing is her.

Over the doubts and objections of Lovett's second-in-command Lewis (Lewis Abernathy), Mrs. Calvert, accompanied by her granddaughter Lizzy (Suzy Amis), comes aboard their ship to give more information. After a lengthy explanation about how Titanic sank, we get to Rose's memories around 20 minutes into Titanic.

Rose DeWitt Bukater (Kate Winslet) is among the first-class passengers making the maiden voyage on Titanic. She's accompanied by her Mother Ruth (Frances Fisher) and her fiancee Calcion 'Cal' Hockley (Billy Zane). Rose does not love Cal, who in turn does not appreciate her elegant manner or taste in art, remarking that the paintings she bought by 'something Picasso' won't amount to much.

Last-minute passengers onto Titanic are Jack Dawson (Leonardo DiCaprio) and his Italian buddy Fabrizio (Danny Nucci), having won tickets in a poker game and rushing to get aboard. These third-class or steerage passengers are just happy to be aboard. However, just one look by Jack onto Rose is enough to have him fall smashingly in love with this beauty, though his fellow steerage passenger, Irishman Tommy (Jason Berry) tells him she's way out of his league.

Jack is laying about the deck when Rose rushes to the stern to attempt suicide. Jack talks her out of it but are discovered by Cal and his valet, Lovejoy (David Warner). She lies and says she slipped while trying to get a look at the propellers and that Jack managed to rescue her from falling overboard. As thanks, Cal agrees to have Jack dine with them in first class.

Jack and Rose start spending time together, where she marvels at his artistic talent and independence. With a little help from nouveau riche Margaret "Molly" Brown (Kathy Bates), whom Ruth and Cal look down on but can't ignore since she is a very wealthy woman, Jack manages to show himself well dining in first class. Rose, despondent over how boring her life will be, manages to slip into steerage, where everyone is dancing to wild Irish jigs, even managing to show off her own dancing skills.

The attraction between Jack and Rose grows, but class still gets in the way. Ruth reminds Rose that she needs to marry Cal as they are essentially destitute. Rose, Ruth and Cal among others also get an informal tour of Titanic by its designer, Thomas Andrews (Victor Garber). Ruth realizes that there are not enough lifeboats for every passenger on Titanic, but as the ship is billed as 'unsinkable', this is not of much concern to anyone save Rose.

After he does his illustration, they run around the ship, culminating in a tryst in the back seat of a car. After they consummate their love and go back on deck do we get to the ship striking the iceberg.

Amid the chaos of the slow-sinking ship, Cal manages to frame Jack for theft of the Heart of the Ocean. Jack is placed in the master-at-arms office and essentially left to die. Rose, realizing that half of the passengers are doomed, is determined to find Jack, even if it means not getting on a lifeboat with her mother and Molly Brown.

The rest of Titanic is of Jack and Rose attempting to survive A Night to Remember, with the growing chaos and horror of the sinking interfering in their lives along with that of Cal, still determined to kill them.

At last, after hearing her story and being moved to tears, the true horror and tragedy of the Titanic sinking hits Brock.  Old Rose then goes to the stern of the exploration ship and there, drops The Heart of the Ocean above where Titanic rests, she having had the diamond all these decades. As she either drifts off to sleep or dies, we see her as that young girl, where she is greeted by Jack, reunited to the cheers of the others who died on that awful night. 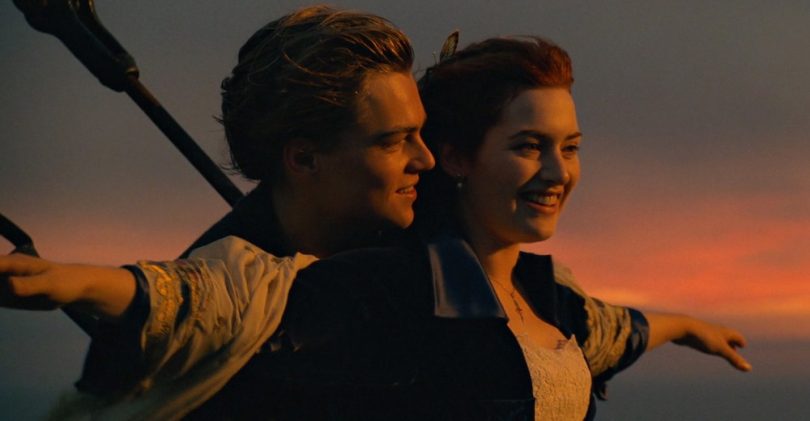 As I said, time has softened somewhat my views on a film I thoroughly hated on first sight. I did find myself more emotional once the ship started sinking, which takes up the last hour of this three-hour-plus film.

I have to give writer/director James Cameron credit for the good he did.  The sinking of Titanic is in turns terrifying and tragic, especially when we hear the ship's quartet play Nearer, My God to Thee as we see the doomed passengers and crew die, attempt to save themselves or calmly accept their impending deaths. The juxtaposition is heartbreaking, effective and powerfully moving.

It is impossible not to react emotionally at this part of Titanic, and I did get a little misty-eyed.

On the technical side of things Titanic excels. Cameron not only put much effort into attention to detail in terms of production design but also in visual effects.  The sinking is a spectacular sequence that would have made Cecil B. DeMille proud. Although time has made the animation more obvious, particularly when we get wide shots of the 'people' roaming the ship (and can tell they are not real), on the whole the visual effects are still first-rate.

Pity that Cameron's script is lousy.

One thing I noticed here that I had not noticed before is the total lack of complexity in his characters. There is no shading with any character. They are either all good (Jack, Rose, Molly, Andrews) or all evil (Cal, Lovejoy, Ruth, or White Star Line executive J. Bruce Ismay, played by Jonathan Hyde). There is nothing in the characters that gives them variety.

Cameron also wants us to feel for characters we meet but never get to know.  We see Tommy and Fabrizio exactly three times, so despite the film's best efforts we don't know them long enough to invest any interest or emotion when they die.

As a side note, each time I've seen Titanic, I either laugh or cheer when one of the smoke stacks falls on Fabrizio, as I found him to be the most annoying and useless character, with nothing to do or add to the proceedings. 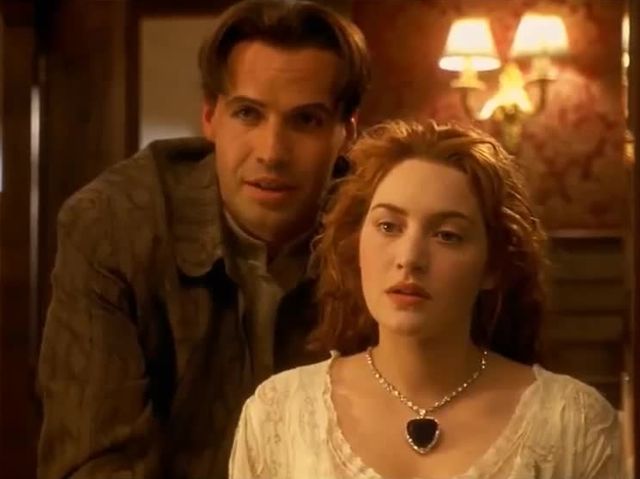 It's a competition to see who can give the worst performance in Titanic, and there are several candidates. Lewis Abernathy's Lewis comes to mind. I guess intended as 'comic relief', he is horrendously self-consciously annoying. One wonders if when he calls Rose Calvert a fraud, "like that Russian babe, Anesthesia", he was serious or making a joke. Either way, it was awful.

Danny Nucci has a good chance of being the worst too, his Fabrizio saddle with an Italian accent The Simpsons would find too much of a parody and with only one expression: an almost perpetually idiotic grin.  Farmer and Paxton were all one-note, reflective of their characters.

However, the worst performance has to be Zane's Cal.

He was genuinely in need of a mustache to twirl as he was irredeemably EVIL. Even in the few times it appeared the script wanted him to be remotely human, he failed. His performance consisted of nothing but looking haughty, and worse, he never expressed any desire for Rose. One wonders why he was so determined to marry someone he genuinely didn't like.

Despite how praised she was, I found Winslet rather mannered and theatrical as Rose. Granted, she was saddled with some awful dialogue ("I'd rather be HIS whore than YOUR wife!", and "I want you to paint my like your French girls, Jack, wearing this.  Wearing ONLY this") but she didn't seem all the trouble. DiCaprio became a teen idol with Titanic, but I never found Jack endearing or worth all the trouble either.

The only real performances were Bates as the unsinkable brassy broad Molly Brown and Gloria Stuart as the older Rose.

Note they also cheated: Rose specifically asks if they had found The Heart of the Ocean, which is impossible since she had it all the time.

Finally, as to the 'love theme', I will always hate My Heart Will Go On, as I find it bombastic and nonsensical. "Love was when I loved you". Really, people think those lyrics are logical?

I kept thinking how well the film would have been if Cameron had made changes.  They could have all been first or third-class passengers. Rose could have been remembering at a Titanic exhibition. We could have dropped the entire present-day scenes, even if they were there merely as exposition to tell us how Titanic sank.

Titanic is too big to ignore, and many people love the film.  It's not my place or desire to take their love for it away. For my part, I found it all a bit tawdry and melodramatic. There are some films I love revisiting, that still thrill me and move me: Casablanca, Citizen Kane, Seven Samurai, All Quiet on the Western Front, It's A Wonderful Life, Some Like It Hot.

I am just so thankful that after today, I will never have to revisit Titanic again.

1998 Best Picture Winner: Shakespeare In Love
Posted by Rick at 6:26 AM