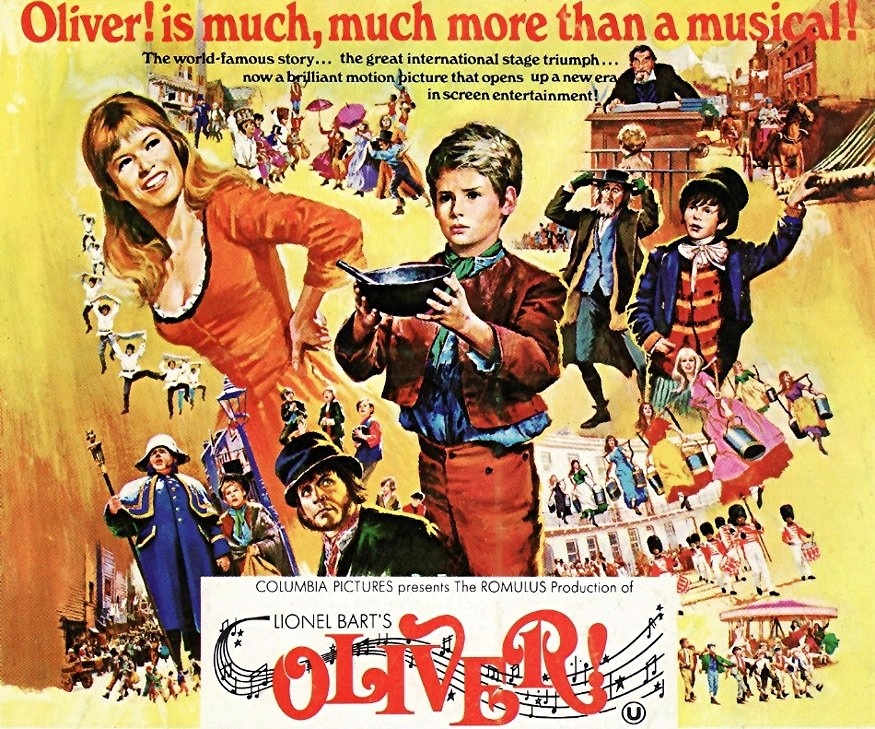 I confess to thinking a story that involves virtual child slavery, child abuse, domestic violence and murder is not the stuff of beloved children's musicals, but that is the reputation Oliver! has. Oliver! is a very interesting film in that while many people know the songs from it, few actually know the source of said songs, let alone the film adaptation itself. Long, a bit clunky but not without some charm, Oliver! is a very curious experience.

Following the plot of Charles Dickens' Oliver Twist, we find young orphan Oliver (Mark Lester) longing for Food Glorious Food, then having the temerity to ask for more.  Not so promptly sold to an undertaker, Oliver endures taunts and abuse until he runs away to London.

There, he makes friendship with Jack Dawkins, better known as The Artful Dodger (Jack Wild). The Artful Dodger not only tells him to Consider Yourself one of the family, but takes him to another 'home for boys', this one run by Fagin (Ron Moody), who advises our young lad You've Got to Pick a Pocket or Two.

Fagin is a fence, using the kids to steal but making the big bucks from working with Bill Sikes (Oliver Reed), a menacing criminal. Bill runs around with busty Nancy (Shani Walls), who insists that It's A Fine Life despite being beaten by Bill.

Oliver's first efforts in pickpocket training goes disastrously wrong: merely watching The Artful Dodger somehow lands him on the dock in front of The Magistrate (Hugh Griffin).  The victim, Mr. Brownlow (Joseph O'Connor) finds that Oliver is innocent, and decides to informally adopt him.

You'd think this would solve all of Oliver's problems, but they are just beginning.  Despite finding himself so well-off that he wonders Who Will Buy this wonderful feeling, Bill Sikes is concerned that Oliver will spill the beans on their criminal enterprise.  Busty Nancy insists that they leave him alone and that Oliver by this point won't care, with Fagin in the middle.  Bill decides that Oliver must be abducted and forces Nancy to lure him away.

Unbeknownst to any of them, Mr. Brownlow discovers that Oliver is really his long-lost grandnephew, he being the illegitimate child of Brownlow's niece Emily, who ran away in disgrace after getting knocked up by her fiancee who jilted her and died in childbirth.

Dickens is rather fond of extraordinary coincidences, jilted brides and illegitimate births isn't he?

Fagin is now concerned about how things are going, and he decides here that it requires Reviewing the Situation.  Ultimately, he opts to think it over once again.  Bill decides to make use of Oliver by having him help him break into homes.  Busty Nancy decides to help Oliver escape, something she's never thought to do herself, since she decides that As Long As He Needs Me, she take take Bill punching her left right and center.

Oliver proves just an inept a burglar as he was a pickpocket, and a mad chase to both catch Bill and rescue Oliver begins.  It leads to both Bill and busty Nancy's deaths, the urchins running all over London, and Fagin losing his secret retirement fund.  Fagin at first is going to turn over a new leaf, but finding himself with The Artful Dodger and his mad skills decides both should be Reviewing the Situation once again.

Oliver reunites with Mr. Brownlow and now he can truly be told to Consider Yourself at home. 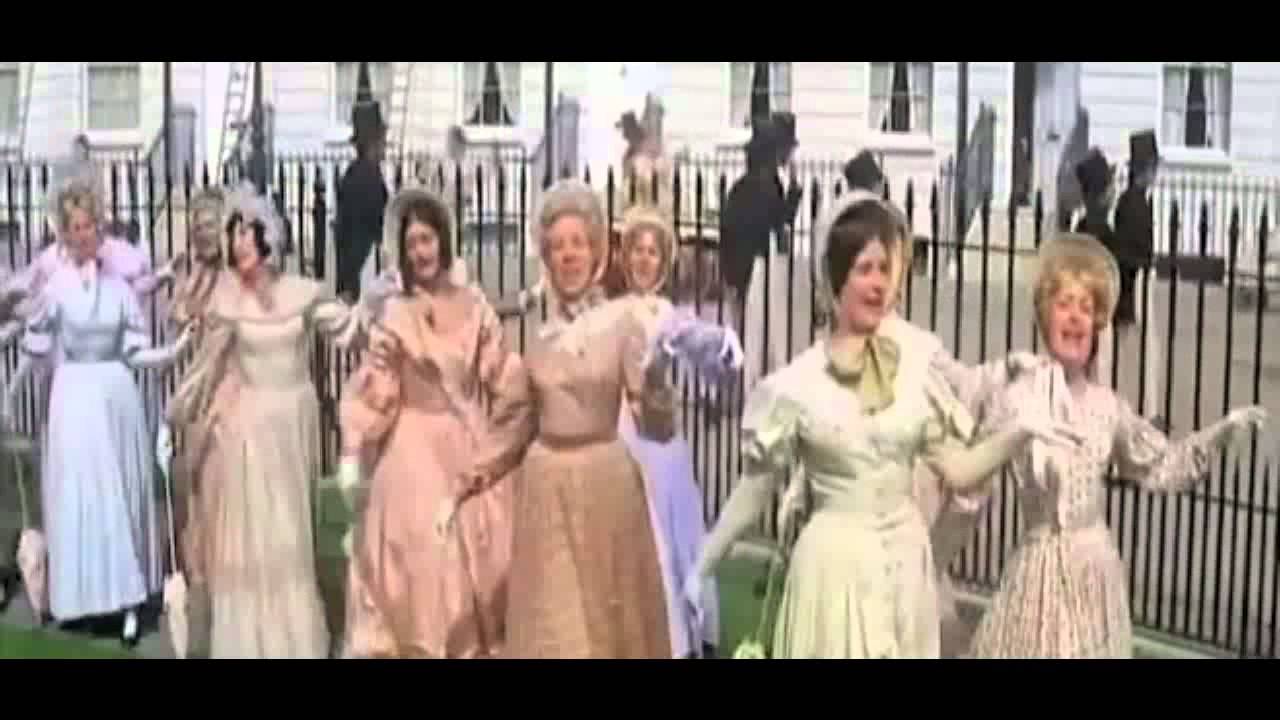 Oliver! is a cute enough film given some remarkably dark material.   Part of its appeal is due to the fact that it is child-centered, with exceptionally cute songs.

Director Carol Reed (coincidentally Oliver Reed's uncle) stages some wonderful musical numbers.  Out of all the songs in Oliver!, I would say Who Will Buy?, the first number in the second section of the film, is a bravura showcase.  Even now, I would say Who Will Buy? is one of the best musical numbers in a musical film, close to but not quite on the same level as the ballet scene in An American in Paris or the title number from Singin' in the Rain.

Slowly building from one melody (Who will buy my sweet red roses?), then slowly introducing other melodies that serve as counterpoint until building to one, Who Will Buy? then keeps on building and building with more dancing and singing until by the end of the eight minute long number, you are almost in thrall of the overwhelming visuals.

While I would say Who Will Buy? is the highlight of Oliver!, it is also probably the longest musical number that is just one song, and here is where things start slipping.  As massive, impressive and joyful as Who Will Buy? is, some other numbers fall flat or leave you simultaneously underwhelmed and exhausted.

I would point to Consider Yourself for example.  Like many of the songs, Consider Yourself is a great song that has slipped into the popular consciousness. However, it also runs seven minutes, and while it features more wonderful dancing which earned choreographer Onna White a well-earned Honorary Oscar, the number seems too long. 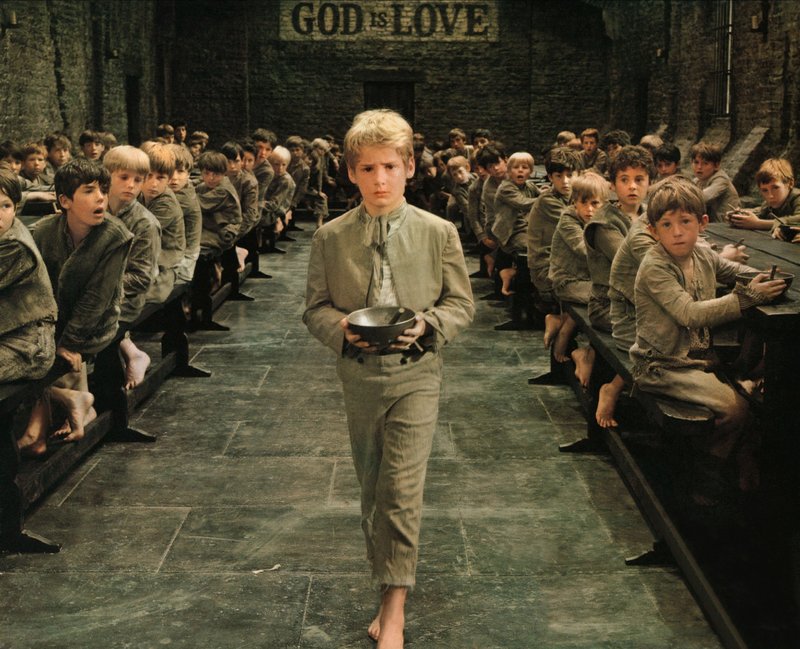 Another issue is that Oliver! sometimes comes across as more opera than musical.  From Food Glorious Food (also well-staged) to Where Is Love?, there doesn't seem to be much rest between them. Sometimes the gap between songs is surprisingly brief: the space between I'd Do Anything (a cute 'love song' from the urchins to busty Nancy) to Be Back Soon (when Fagin sends the boys to do a day's 'work') is just two minutes. There is just four minutes separating the opulent Who Will Buy? and As Long As He Needs Me.

Other songs seem if not superfluous at least a bit out of place.  Chief among them for me is As Long As He Needs Me.  I know it is another popular song with many covers, but somehow this paean to the joys of domestic abuse has never sat well with me. For some reason, I found that every song involving busty Nancy seemed to get in the way: As Long As He Needs Me, Oom-Pah-Pah (which I hated), I'd Do Anything, It's A Fine Life.  Don't know why, but they did.

I also wasn't crazy about Where Is Love? and don't understand why that song is seen as brilliant.

It might be because Lester was not particularly good as Oliver. I noticed that Oliver really did not do much.  He seemed rather to merely look on as things happened. His is a weak performance, having little to do apart from look scared or confused.  I also understand that Lester did not do his own singing for Oliver!, but the idea to have a girl sing his part (Kathe Green, daughter of musical arranger Johnny Green) is downright bizarre. It's one thing to quickly see Lester is dubbed, but quite another to hear a totally unnatural sound coming from his lip syncing.

Perhaps the best performance is from Oliver Reed as Bill Sikes. He is from the get-go quietly menacing without saying anything, his eyes showing a malevolence carried well when he does speak.  Ron Moody, recreating his original stage performance, has a very light comical touch as Fagin.

I remember David Lean's Oliver Twist and being concerned that Alec Guinness' performance, while masterful, could be perceived as falling into Jewish stereotypes in both manner and appearance.  I never got that sense from Moody's performance in Oliver!, for not once did I consider Moody's Fagin to be either evil or anti-Semitic. I think it is because Moody played Fagin more for laughs, as a bit of a bumbler who was actually a very nice person if he gave himself the chance.

It also helps that at least in this regard, Oliver! changes Dickens' work to have Fagin and The Artful Dodger happily dancing off into the sunset to continue their life of crime, versus Lean's rather sad fate for Fagin.

Wild, who like Moody earned an Oscar nomination for his work, was quite charming as The Artful Dodger, keeping to the light nature of the film.  Walls' busty Nancy did good work but I have my concern that Nancy essentially liked to be beaten. In essentially a cameo, Griffin brings a bit of comedy as The Magistrate as poor Lester does nothing but cry and cry.

Oliver! to my mind is the weakest musical to win Best Picture.  It's actually also to my mind one of the weakest Best Picture winners.  It's cute enough, charming, good for a long afternoon, with songs that many of us will know if not know came from the musical itself.

Overall, there isn't really much wrong with Oliver! but there also isn't much to make it a film that will last the ages.  Great soundtrack, decent enough adaptation.