It must have been a surprise when Midnight Cowboy, a tale of a male prostitute and his sleazy buddy, won Best Picture.  We went from the first (and so far only) G-Rated film to win Best Picture (Oliver!) to the first (and so far only) X-Rated film to win Best Picture.  Granted, that if the film were released today, Midnight Cowboy would probably be classified as R, though given what I've seen of teenage audiences, I think a PG-13 is more realistic.  Midnight Cowboy might be a bit dated today, but with two fantastic performances and a heartbreaking story, it is still a worthwhile feature.

Joe Buck (Jon Voight) is a Texas cowboy who is shaking the dust off his shiny new shoes and headed up to the Big Apple, where he will follow his dreams to be a premiere male hustler (read, male prostitute).  Once he arrives in NYC, he finds that hustling isn't as easy as he thought it would be.  He does get one woman to take him home, Cass (Sylvia Miles), but after their tryst, he ends up paying her when she becomes all but hysterical when asked to pay, pleading she needs money for cab fare.

Sometime later, he meets Enrico Rizzo, better known by his nickname of Ratso (Dustin Hoffman).  Rizzo tells Joe he can set him up with a pimp, but that turns disastrous when said pimp ends up being a religious fanatic trying to get people out of the business.  As Joe has given Ratso the last of his cash, he now is all but destitute, and loses his hotel room.  Joe ends up trying a little gay hustling, which also turns out disastrous when the young student who gives him oral sex cannot pay.  Joe, angry, tries to take his watch but when the kid begs him to spare his watch, Joe relents.

Joe does end up finding Ratso and roughs him up, but with his limp and generally poor help Ratso finds himself a pathetic figure.  Soon, despite each other, Ratso and Joe end up as friends, especially since Ratso offers Joe shelter in the condemned building he has been squatting in.  In a turn of events, Joe and Ratso get an unexpected stroke of luck when they are invited to an avant-garde party (think Andy Warhol-like), probably due to Joe's eccentric outfit of the cowboy.  At said party, Joe tries marijuana (thinking it was just an odd cigarette) and meets Shirley (Brenda Vaccaro), a socialite who agrees to go home with Joe.  By this time it's obvious Ratso's health has taken a turn for the worse but Joe, despite his fondness for Ratso, knows this could be a step to getting back into hustling (which would provide for both of them).

Shirley agrees to be Joe's madam, thrilling Joe, but when he returns to their condemned building Ratso is clearly dying.  His great wish is to go to Florida, and Joe goes to desperate measures to get the money for tickets: beating up a repressed gay man that had picked him up (whether Joe actually killed him or just left him bloodied we don't know).  Miami-bound on the bus, along the way Joe abandons his cowboy gear while Ratso shivers in the Florida heat.  As they enter Miami, Joe realizes Ratso has died, but there's nothing that can be done except continue the journey, with Joe tenderly cradling Ratso's body. 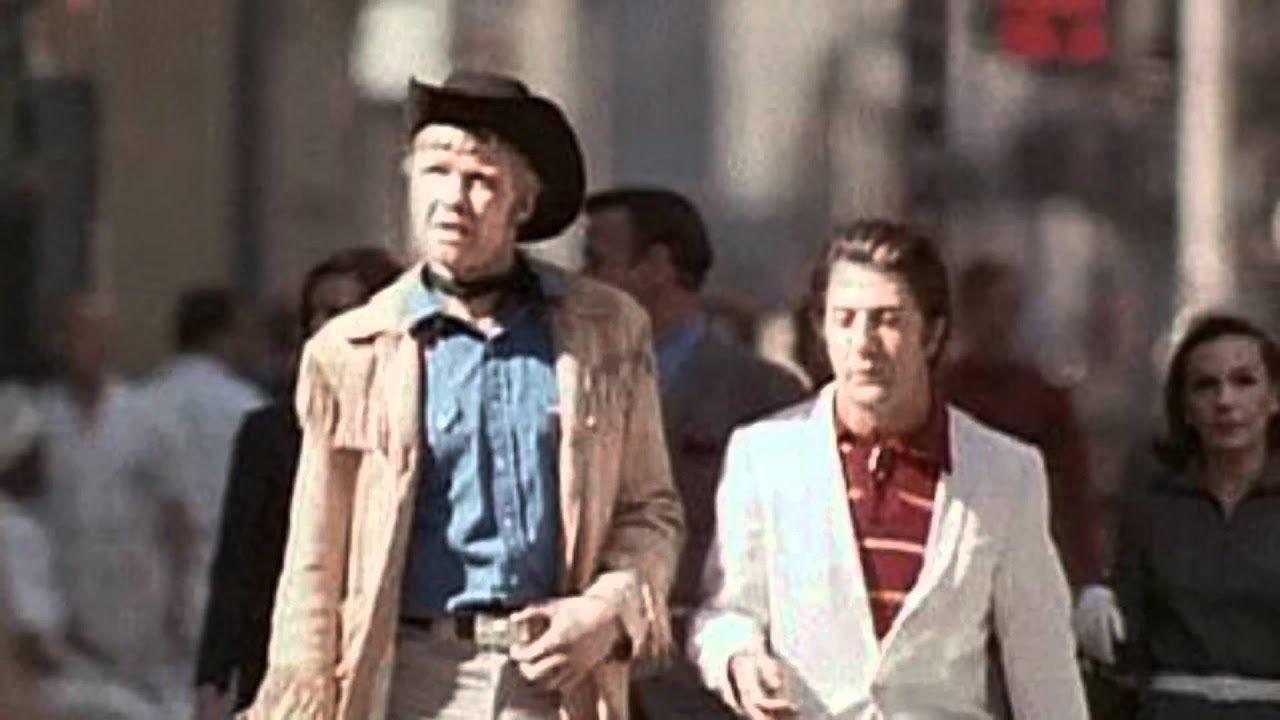 Midnight Cowboy hangs on the performances of the two leads, and both Jon Voight and Dustin Hoffman deliver simply outstanding performances as Joe and Ratso respectively.  Voight makes Joe into a very endearing character despite (or perhaps because) of his mixture of swagger and innocence.  In many ways, Joe Buck (a perfect name for a hustler who uses a cowboy persona) is a very innocent figure.  He truly believes women in New York will push each other aside for a chance to sleep with him.  He truly believes he will make massive amounts of money for his sexual services.  Joe is also a very trusting and ultimately decent person who was not cut out to be a male hooker.

We see this whenever he does manage to turn a trick.  Any other man, especially a rampantly heterosexual one who is reduced to procuring other men, would have taken the watch.  However, Joe simply could not take it from this scared high school or college student (who at one point offers him his schoolbooks as payment), this kid who was obviously still in the closet, terrified of both being beat up and of being exposed.  Joe's basic goodness and kindness comes through, so when he does end up savaging another trick, we know by now thanks to Voight's performance that it's due for his love of Ratso and not for any maliciousness.

Voight makes Joe a naïve innocent, not an idiot, and this clever balance is what makes Voight's performance one of his best.

Much has been made of Hoffman's Ratso Rizzo, and I join in the chorus.  It isn't just the physicality of Hoffman's performance, with the limp and the slightly hunched manner.  It isn't even that nasally twang he has (which he loses to speak in his actual voice in the famous "I'm WALKING HERE!" scene (which I understand was unscripted and due as a result of a real NYC taxi inadvertently interrupting the first good take Hoffman had for this scene).  It's in Hoffman's way of making Ratso an equally sympathetic figure in his brokenness (physical and spiritual).  Like Joe, Ratso has his own dreams of escape.  We see this in Ratso's great dream of Miami.  Just as Joe imagines New York as the paradise of easy money through easy women, Ratso sees Miami as this paradise of retirees and endless supply of food and sun.

In their own way, Ratso and Joe are two peas in a pod, dreamers with vague ideas of how to get where they want to go but not realizing they chase wrong dreams.

Director John Schlesinger and screenwriter Waldo Salt (adapting James Leo Herlihy's novel) show us the character's evolutions to their true selves in subtle and not-so-subtle ways.  For most of the movie, Joe has his 'costume' (a very elaborate cowboy ensemble) that he never takes off unless bathing or servicing.  When they get close to Miami, Joe has changed clothes to fit the area and without great drama or some grand scenario throws the hat, vest, and boots into the trash.  Schlesinger doesn't have Joe linger or pause over discarding his garb, which would have been tempting to make the audience focus on Joe's renunciation of the cowboy way.  It's done quite casually, almost without thought. The not-so-subtle way was during the elaborate Warhol Factory-type party, which in 1969 would have been contemporary but today looks almost kitsch and dated.   Part of me felt this scene lasted way too long, and the fact that almost fifty years have passed has lessened the shock value of this 'den of decadence'.

In truth, Midnight Cowboy has lost much of its shock value due to the immense changes in film and society since 1969.  The few scenes of homosexual acts (which were merely suggested) are flat-out tame given the openness of 'the love that dare not speak its name' now being comically referred to as 'the love that won't shut up'.   In fact, a lot of the sex in Midnight Cowboy is through suggestion, which begs the question as to why the film got an X rating.  My thinking is that it was due to the suggestion of oral sex and male-on-male hustling (though nothing is overtly scene...even in the sexual liberation of the late 1960s there were some things you simply couldn't do on film versus today).

In other performances Miles earned a Best Supporting Actress nomination for her performance (though given it was approximately five minutes long again I wonder why it was singled out).  This is especially true when given that Vaccaro was probably on screen longer and gave an equally good performance as Shirley, the potential madam.  However, in fairness Miles leaves you guessing whether she was genuinely hurt that she was asked to pay for Joe's services or was merely playing him to get out of paying.  I'm not saying it was a bad performance, but perhaps a bit short to have potentially won an Oscar for (she disappears after that ill-fated tryst and is never seen again).

Midnight Cowboy is ultimately a heartbreaking film about two lost men finding a sense of family with each other despite their wild differences.  In the seedy world they live in, Joe and Ratso's genuine friendship and love for each other is a sign of hope.  Midnight Cowboy is a bit dated and tame by today's standards (the extended psychedelic party now looking either flat-out weird or silly), but in terms of performances (especially by Voight and Hoffman) and as a study of two people you end up caring about, it will have everyone talking.