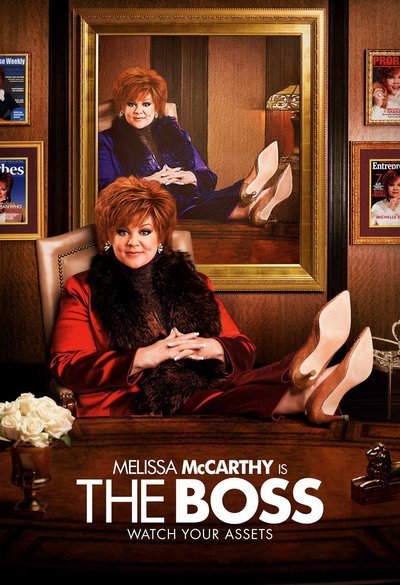 If you want to see a textbook example of a 'comedy' where you can see people whom I suspect know better and realize they are in an awful film but gamely try their hardest to just get through with it, then I would recommend you watch The Boss.  A comedy is suppose to make you laugh, and I won't lie: one or two moments in The Boss did make me chuckle.

Most of it, however, literally horrified me.  How else to describe a film that suggests you can get laughs out of assaulting children in particularly violent and gruesome ways and suggesting that straight men perform oral sex on another man (and being as visual about it as possible without slipping into Pornhub territory)?  At one point in The Boss, I literally put BOTH hands to my mouth in sheer horror, stunned that someone with genuine comedic talent as Melissa McCarthy would imagine that scenes of preteen girls getting body-slammed by women old enough to be their mothers would be funny.  The Boss might be the nadir of McCarthy's career (which after her Oscar-nominated turn in Bridesmaids, has sputtered).

Michelle Darnell is an orphan who is sent back to the orphanage every five years, and despite the best intentions of Sister Agnes (Margo Martindale, looking terrible embarrassed to be in even this pre-credit scene), Michelle grows up determined to be the top.  As an adult, Michelle (McCarthy) has become "the 47th wealthiest woman in America" (her words) and leads her cult of devotees to believe in "the power of one".  She has her man Friday, Tito (Cedric Yarbrough) and her very harried assistant, Claire (Kristen Bell, looking desperate to just say the lines and go home).  Michelle's bitter ex-lover Renault (Peter Dinklage, vamping it up for all it's worth), tips off the SEC about her inside trading, and off she goes to prison.

With no one to turn to (because everyone she knows apparently hates her), Michelle is astonished to find that there is no town-car to pick her up from her luxury prison (this is one example of how clueless Michelle is).  Wandering the streets of Chicago, she turns to the only person who might tolerate her existence: Claire, who has a daughter Rachel (Ella Anderson) that Michelle was unaware existed despite not just Claire's many years of devoted service prior to her imprisonment but the numerous times Michelle was told about Claire.

This being a brain-dead comedy, Claire reluctantly takes Michelle in and Michelle soon turns Claire and Rachel's lives into nightmares.  Michelle has no problem taking up the bathroom to self-tan (including exposing both her vagina and ass to Claire AND Rachel, not comprehending why any of that should bother either), but somehow she is given one small task while Claire is in her dead-end job: take Rachel to her Dandelion Girls meeting (think Girl Scouts minus the copyright infringement).  While there, Michelle gets into an argument with Helen (Annie Mumolo), an uptight woman with a daughter in the Dandelions (which given that Rachel is a tween and Helen's daughter is clearly high school age, makes me wonder exactly what the age range for Dandelions are).

Michelle sees the money the Dandelions make in selling cookies and decides this is her way back to the top.  With Claire's delicious brownies as the bait, Michelle comes up with her own rival organization: Darnell's Darlings.  Unlike the Dandelions, this will be a for-profit company.  The brownies are a huge success, though they lead to a massive physical fight between Darnell, Helen, and their rival thug girls.

Among the highlights here are one teenage girl getting hurled to the side of a car, Darnell using her arm to hit another girl's throat, and Darnell shoving cookies up Helen's ass.

Soon Renault gets wind of this, and manages to get Darnell to literally sell out Claire (especially after Rachel presented Michelle with a framed picture of the three of them, offering that they made up the weirdest family).  Wonder what her motivations were...

Well, as Claire has quit her dead-end job to go all in to the brownie business, she has only her ex-coworker/current boyfriend Mike (Tyler Labine) to turn to.  Feeling something she's never felt before, guilt, Michelle attempts to make amends by getting the contract back from Renault (whose real name is "Ronald").  Part of Michelle's elaborate plan involves Mike giving the security guard at Renault's headquarters a blow job, which is demonstrated in a montage.  The fact that sucking dick is completely unnecessary to the whole plan escapes Michelle.

In the end, Michelle Darnell learns to love and share.

Perhaps one of the biggest mysteries of The Boss (apart from who exactly thought any of this was remotely funny) is Melissa McCarthy's choice of wardrobe.  For reasons known only to her, her cowriter/director/husband Ben Falcone, and the third writer Steve Mallory, Michelle's neck was always covered up.  The effect was to make her look like she was wearing a neck-brace throughout the film.

Why exactly was her neck ALWAYS covered up (even in the shower scene more horrifying than in Psycho)?  Falcone and McCarthy (who are fast becoming the anti-Powell/Loy, Day/Hudson, and Bogart/Bacall of film...their teaming up leading to horrors like The Boss) never I figure gave any thought that Michelle looked like she was trying to hide something about her neck.  Throughout the entire film I kept wondering why she was covered up, and when you start wondering why a character goes through great lengths to hide a part of the body that few of us even care about (and never get an actual reason for this elaborate act) then said film just sinks further and further into idiocy.

More than just McCarthy's perpetual neck-brace (seriously, why did she feel the need to wear collars that went up to her ears) is how The Boss wants us to care about someone who has no redeeming value.  The entire pre-credit opening was made to give Michelle motivation (she was rejected, so she'll reject everyone and not care about people), but this cannot explain her cluelessness, callousness, indifference to others and sheer grotesqueness.  Michelle does not understand why getting into Claire's bed would bother Claire (especially if Claire is in bed too).  Michelle feels fine telling Helen's daughter that her mother probably experimented with lesbianism and that she would grow up to be a lesbian herself...in front of her Dandelion troop.  Michelle has no problem telling a former protégé that his late wife was a whore who 'screwed all the members of the IT Department' (despite having no proof of any of it) even after being informed that the woman was dead.  The film made no case as to why Helen had such antipathy for Michelle to lead to such violent extremes. Michelle feels justified in hitting a tennis ball at the throat of her lawyer (Falcone in a bit part) when he delivers bad news.

Well, maybe in that last part, it was a subconscious message from the audience to Falcone/McCarthy about how bad The Boss was, so I'll let that one slide.

In short, The Boss went out of its way to make Michelle Darnell such a repulsive figure that you wanted her to fail, so the predictable (and not-real) last-minute change into someone a little softer felt totally fake.

I haven't seen Tammy (and The Boss makes me less likely to do so), but I think Falcone should stop directing...period.  Not just his wife, but anyone really.  Just about everyone in The Boss looked as if they were reciting words with no real meaning, fully aware that they were in a turkey.  Bell looked pained, as if she was almost a hostage that had to get through it in order to be freed.  There was simply no enthusiasm to her, appearing to be fully aware of how monotonous and thankless the entire thing was.  Dinklage just wanted to remind people he wasn't just the guy from Game of Thrones and could do funny stuff...even if there was nothing funny, period.

The ONLY good things in The Boss were Labine and Anderson.  In the case of the latter, she made Rachel a likeable figure (even if she was a stock character).  The real standout was Labine, who brought an everyman quality and believability to Mike.  He behaved as if Mike were a real person, not a brainless sketch figure who moved.  Interestingly, the scenes with him and Bell were the most pleasant and real because it looked as if real people were involved.  Even Bell appeared to perk up, relieved she had a semblance of an actual story to work with.

I'd like to see a movie about THEM, about their courtship, with McCarthy's character in the background causing innocent chaos.  THAT would have been a good movie, one where Michelle was clueless but not malicious or monstrous...but a minor character.  In short, a film where Michelle plotted her way to the top with Claire's brownies...not have Mike try to perform a sex act on another man despite his heterosexuality. Pity McCarthy and Falcone opted against that, opting instead to focus their attention on a character that perhaps works in small bites, but not in a whole feature.

If not for Anderson and especially Labine, The Boss would have been simply intolerable.

A few more films like The Boss and she might just as well go back to television, where at least she'll be reigned in and Falcone (hopefully) won't indulge his wife's penchant for being unlikable onscreen.  Oh well, at least she's got the Ghostbusters remake coming up...