Please visit the Best Picture Retrospective for all reviews of the Top Prize at the Academy Awards.

I have seen An American in Paris twice now, and each time I cannot muster the enthusiasm I'm almost ordered to have for it.  It's a pretty-looking picture, it has some fine moments in it, and it really just wants to be loved.  However, in both viewings I thought the story was pretty thin, some plot points veering on the creepy, and while it's a great showcase for Gene Kelly and the Gershwin Brothers' music, An American in Paris never found a way to bring all the varying elements (songs and whatever passed for the story) together.

Jerry Mulligan (Kelly) is the titular character, an ex-G.I. who stayed in Paris to pursue his career as a painter.  He isn't very successful, but he has a quick quip for anyone who says he isn't very good (or very bad, depending on his mood).  He has a best friend, Adam Cook (Oscar Levant), a concert pianist who doesn't care for either.  Adam was the pianist for French singing star Henri Baurel (Georges Guetary), with whom he still keeps somewhat in touch with (especially when Adam needs to touch on someone for a few francs).

Jerry soon catches the eye of patroness of the arts Milo Roberts (Nina Foch).  Ostensibly attracted to Jerry's paintings, it's clear to everyone that her interest in him is more than artistic.  Jerry isn't too pleased about that, but he's not discouraging it either.  As it happens, while Milo is squiring her latest boy-toy...I mean, discovery at a hip Parisian bar, who should come in but Lise Bouvier (Leslie Caron).  Jerry is instantly smitten by her, although she makes it clear the feeling isn't mutual.  After some pursuing by Jerry, Lise agrees to date him, despite being engaged to someone else.

That someone else just happens to be Henri Baurel.  Now both Henri and Jerry are unaware that Lise is seeing both of them at the same time.  Despite herself, Lise falls in love with Jerry, who is simultaneously protesting his independence and being patronized by Milo.  Only Adam is aware of what's going on because he knows the girl both men are talking about is the same one, but he can't tell either.  Taking advise from an unwitting Henri, Jerry confesses his love for Lise, but she is too devoted to Henri, who saved her during the Occupation, to abandon her fiancée.

Devastated, Jerry agrees to be with Milo and takes her to the Art Student's Ball (where everyone wears black-and-white).  It seems everyone is there: Adam, Henri, and Lise.  A heartbroken Jerry and Lise say goodbye before she and Henri go off to get married, but someone just happened to overhear their conversation.  A drawing flying to Jerry brings him a lavish fantasy sequence, the famous American in Paris ballet sequence, a lavish 16-minute dance number set to George Gershwin's famous music.  In the end, Jerry and Lise are reunited thanks to the most understanding fiancée in film history (and I'd argue setting the standard in romantic comedies of the 'other fellow', the boyfriend or fiancée who willingly gives up the girl for the lead).

If we took the songs and the big ballet number and the prettiness of it all, An American in Paris would come close to being almost a horror film.  Let's take a look at some of the rather shocking elements in Alan Jay Lerner's (inexplicably to me) Oscar-winning screenplay.  First, you have a thinly-veiled suggestion that Milo is almost a madam, seducing struggling artists to satisfy her own appetites.  Jerry is perfectly aware Milo is after his body but he doth protest too much about his artistic aspirations.  Moving on to Jerry, in any other film, particularly one made today, his actions of following Lise and harassing her into going out with him would be called 'stalking'.  Yes, it was the 1950s, so perhaps certain things were accepted then that aren't today.  However, Lise made it perfectly clear that she found Jerry repulsive (I figure not physically, it IS Gene Kelly after all), but after some persistence Lise quickly gives in, gleefully I might add.

If one thinks on Lise, we have to wonder what kind of woman would willing go out with a guy when she is engaged (even if she is more grateful than in love with him).  The word I found was, "tramp".  Any woman who dates another man (especially one she at first was disgusted with) while being engaged to another man is a tramp.  No matter how pretty the package, the actual story is rather shocking.

Milo is wildly possessive of a man she wants to bed.
Jerry plays hot and cold with his patroness AND goes out with an engaged woman.
Lise pursues a secret romance with someone while engaged to someone else.
Henri is quick to give up a woman he is engaged with, making one wonder whether HE was ever in love with his fiancée at all or just saw her as a little girl who could provide legitimate sex (and given he's French, one would have thought he would opt for a mistress).

And all of this is suppose to be romantic.

An American in Paris in terms of story is just so awful I still don't understand why so many people don't ever question the logic of it all.

In terms of story, the film is a flop.  In terms of the actual music, that's hit and miss.  Obviously, the Gershwin Brothers catalogue is among the most beautiful and brilliant that one can have to work with.  Sadly, the songs rarely were integrated into An American in Paris with any degree of success.  Let me give you a few examples.  Early in the film, Henri makes it clear he isn't a fan of jazz, preferring something By Strauss.  Well, who cares what the annoying French star thought. or that Adam and Jerry were both mocking him for his passé tastes?  I should point out his dislike of modern music (which adds zero to the plot) didn't stop Henri from belting out I'll Build A Stairway to Paradise as part of his nightclub act (and a lousy act at that...if it had been at the Moulin Rouge I would have asked for my money back).

Even worse is what is suppose to be Levant's show-stopping number, the Concerto in F for Piano and Orchestra.  In this sequence, Adam is lying in bed, smoking, and fantasizing about giving a concert.  He is the pianist at this concert, then we see Adam is also conducting.  We then see a row of Adamses making up the violin section and conclude with him in the audience applauding himself.  It might have been innovative at the time, but no one as far as I know has stopped to wonder exactly what either this number, or the By Strauss number, or the Stairway to Paradise number have to do with anything involving the plot (weak as it is).

I think it comes from the fact that the songs were not written specifically for the film.  Instead, Lerner and director Vincente Minnelli had to put the songs somewhere and whether they actually fit or not was irrelevant.

That isn't to say that the Gershwin music isn't used in good ways in An American in Paris.  Setting a ballet number to Embraceable You where we are introduced to Lise is a brilliant idea, allowing both a showcase for Caron's dancing ability and is pretty to look at.  Another highlight is Our Love is Here to Stay, where Caron and Kelly have an enchanting pas de deux.  One can almost see in their dancing the two characters falling in love and it's a wonderful moment. 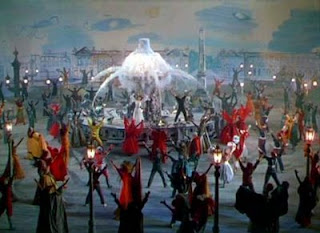 Naturally, the highlight is the lavish An American in Paris number, which takes up the last quarter of the film.   In terms of visual spectacle, it certainly delivers.  One cannot fail to be impressed with Gene Kelly's mix of artistry and athleticism as he metaphorically tours the city through French art and Gershwin's music.  It has a mixture of passion and joy.  It may look artificial, but deliberately so with the artifice of it all being one of the primary points.  In the end it is a wildly impressive Impressionistic number.

For me, however, it takes more than pretty costumes and lavish/ambitious numbers to make a good film, let alone a Best Picture winner.

An American in Paris has other things that I didn't care for.  I'll cut Leslie Caron some slack: for her film debut, she is a pretty weak actress.  As a dancer it's a beautiful thing to see.  Guetary is sadly annoying as Henri, a thin character who serves as nothing more than a plot device.  Given he was a big star in France, one wonders if it explains the French obsession with Jerry Lewis: his singing is awful, especially the vibrato in it.  The film begins with three voice-overs (Jerry, Adam, and Henri) that is quickly dropped.  Longtime readers know I hate voice-overs with rare exceptions (Sunset Boulevard, Blade Runner), and this is no exception.  Even more bizarre, once we get past the introduction that device is dropped.

Also dropped are characters when they are not needed.  Foch suffers the most: her desires for Jerry go almost totally thwarted, and what happens to her after the lovers are united we neither know or apparently care about.  Same goes for Adam: as soon as he does his job by informing Milo that Jerry's got the hots for another girl, he too disappears.

I'm sorry, but the idea that Henri would so willingly give up the girl to someone else is something that I just can't embrace.  I've seen too many romantic comedies where the third part in a love triangle, usually a male, gives up the woman he supposedly loved so she could be with another man.  I can't say that An American in Paris started this trend, but no matter what the setting I find such men weak and unbelievable.  In fact, he strikes me as rather dim-witted.

Again, there are elements in An American in Paris that are wonderful.  Levant steals the show as the wise-cracking, sarcastic Adam.  Just before we get another musical number, S'Wonderful, where Guetary and Kelly sing about the same woman, Adam puts two and two together and attempts in his comic way to stop them from putting two and two together.  "Did you know I once gave a command performance for Hitler?" he tells them in an effort to distract their conversation.  He also does a bit with cigarettes and coffee that is a great bit of physical comedy.

If only there had been another nominee that year which had brilliant acting, an intense screenplay, and could also be a love story.

If only they could have found some other nominated film in 1951 that could have challenged An American in Paris as a true cinematic landmark.

I guess that year they just couldn't, so they threw it to the prettiest picture they could find...

1952 Best Picture Winner: The Greatest Show on Earth
Posted by Rick at 9:14 AM