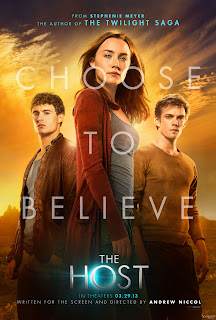 Lost in the Muck of Meyer...

Earth has been conquered by 'the Souls', aliens who have brought peace and love and understanding to our much-beleaguered planet.  The Souls have healed the Earth: made it clean, free from war and disease.  One would think humans would be grateful, and perhaps we would be if it weren't for that 'aliens taking over our bodies' bit.  While most of humanity has been invaded by these body snatchers (have to admire Meyer's unique ideas), there is a group of humans that won't submit to this programming.  These humans form some kind of resistance against Occupation, but they are a small group.

One of them is Melanie (Saoirse Ronan), who in the start of The Host throws herself out a window rather than have these soft-spoken white-clad figures take her body and mind (is it me, or can a case be made that the Souls, with their penchant for white ensembles and generally pleasant demeanor, be seen as a particular religious group?).  As it stands, while Melanie manages to survive she is implanted with a Soul who calls itself 'Wanderer'.  The Seeker (Diana Kruger), a Soul, wants to find the secret lair of these humans.  The Wanderer at first wants to tap into her 'host's' mind, but Melanie resists (usually by speaking sarcastically to the Wanderer's head).

Eventually the struggle between Melanie and the Wanderer is too much, with the Wanderer literally pushed out the window (again) by Melanie.  Melanie/Wanderer goes to find her family, and eventually she finds them: her Uncle Jed (William Hurt), her brother Jamie (Chandler Canterbury) and her love interest Jared (Max Irons).

A side note: Jed, Jamie, Jared...what is it with writers and having three characters whose first name all start with the same first letter?

Well, Jared automatically distrusts her, Jamie is hopeful to have his sister back, and Jed protects her even if she is an alien and her aunt Magnolia (Francis Fisher) is openly hostile.  Only Ian (Jake Abel), someone who also started out suspicious of Wanderer (now nicknamed Wanda) starts to carry a torch for Wanda (over Melanie's loud...and I do mean LOUD...objections).  Well, the Seeker keeps hunting for Wanda and the Humans, while Wanda discovers a way to remove the Souls from humans without harming either.

Eventually, Wanda asks the cave's physician (oh, yes,  the Humans have taken refuge in a series of caves, part of a dormant volcano system where one area is large enough for a wheat field) to remove her Soul.  The Seeker is captured and the Soul removed with her human restored.  As for Wanda, she is placed to her surprise in a human who was basically dead...therefore Wanda and Ian can be together and Jared and Melanie can be together.

The Host has so many things wrong with it that it soon becomes too hard to catalogue them all.  Let's start off with director Andrew Niccol's adaptation of the novel.  I can't imagine that someone as bad as Stephanie Meyer could come up with such hilarious lines as Wanda telling Jared, "No.  Kiss me like you want to get slapped."  (For clarification, Melanie will react by gibbering in Wanda's head if the former gets angry...and evidently the latter making out with anyone really sets her off).  That just had me laughing (even if it was in context), while other moments were equally amusing.

The Host has an ongoing conversation between Wanda and Melanie as the latter attempts to keep some control over her body and emotions while basically powerless to do anything (except, of course, whenever the plot needs her to given that on one or two occasions Melanie is able to overtake Wanda and speak for herself).   Perhaps in the book this device works because we as the reader can 'see' into Wanda to 'hear' Melanie.  However, the film version always makes Melanie sound less like a brave and fiery spirit and more a whiny teenager.  "Don't you DARE smile at him!" Melanie 'says' when Wanda starts making goo-goo sparkly eyes at Ian.  It is even funnier when you hear it than when you read it.

This is a big problem with The Host.  Because we first meet Melanie as she plunges to her non-death we never got a sense of what kind of person she is/was, and the flashbacks didn't help establish anything else except that she fell for Jake, loves Jamie, and was like all Meyer females, aggressive sexually (for further example, see Swann, Bella).  Therefore, when we hear her voice, she comes across as some dippy teen who just wants to be with Jake, not fight against this Invasion.

As a side note, the actual invaders are almost comical.  They wear white clothes and have an affinity for silver vehicles.  I kept wondering why they were so terrible when they were so terribly nice, almost Mormon-esque in their behavior.  There was a vague sense that they wanted to take over humanity, but these few scenes of them (or particularly the Seeker) being aggressive even made it clear that they generally were not for killing.  If the humans wanted to get things, I figured given the world they lived in, it would have been easier to go into "Store" (that is how the location was noted), wear a white suit (with sunglasses) and just take what they needed (in this world, there was no need for money since the aliens just took what they needed and left with smiles on their faces...almost Stepford-like).   The entire 'let's rob Store at night' thing seemed almost ridiculous.

However, not as ridiculous as what was suppose to be an exciting action scene that ends in two characters' deaths.  First, we never really got to know who the dead people were, so their loss was of little value.  Second, their behavior was just plain dumb.   In order to avoid detection in this highly regulated society, people in their shiny silver vehicles usually stay within a certain speed limit.  What do our two brilliant humans do?  One would have thought they had done this before, so their actions aren't just bizarre, they are idiotic.

I felt bad for the actors, certainly for Ronan who is clearly much better than the material.  The Melanie voice (in particular whenever she says something smart to Wanda) makes her look not struggling with two beings in one body but as borderline crazy.  Melanie as I've stated as sarcastic, almost whiny, but in fairness to Ronan she did the best that anyone could with the material she was given.  As for everyone else en masse, they were directed to play everything with such somberness, such seriousness, that the tone makes everything look comic.  Somehow, the stern tone The Host takes has the opposite effect: it just highlights all its flaws to where people end up either laughing or leaving.

I can't truly judge how good actors either Irons or Abel are because they were one-note, more looking pretty (which they are) than expressing emotions.  Boyd Holbrooke's Kyle (the main antagonist to Wanda) was similarly one-note, scowling throughout the film as he menaces her.  It's a sign of how bad the performances were that when Jared stops Kyle and someone else from killing Wanda early in her captivity, he seemed to be extremely still in what was suppose to be raging anger.  I half-wondered whether it was because they couldn't shout inside the caves, but there has hardly a hint of emotion from either pro or antagonist, as if both sides were basically behaving half-dead.

One thing I didn't care for was that Melanie could control Wanda's actions whenever the plot needed to, such as whenever someone else's life was in danger or in quickly recognizing and speaking over Wanda when she first meets Uncle Jed.  For me, that is kind of cheating.

Another matter is over whenever we hear Melanie's voice speaking over/to Wanda.  I figure again that this might work in the novel, where we don't have visuals save in our minds.  However, whenever we do hear Melanie, the effect is inadvertently hilarious.  I do wonder if it would have all worked better if Melanie's voice were sparingly or never used.  It certainly would have been less funny, but given that since everyone is trying so hard to play The Host as if it were a deep and intelligent story but instead making everything look and sound even sillier, who knows.

Finally, Antonio Pinto's score only added the coda to the laughter quotient of The Host (pun intended).  Trying to be vaguely New Age, the schmaltz factor was amped up to where it makes everything funnier because again it is trying so hard (like everything else in this fiasco) to be so serious.

The best way to describe The Host would be to call it a variation of The Change-Up: Drama Edition. It's a disaster of a film that will be seen as an unintended comedy, something akin to Plan 9 From Outer Space or Manos: The Hands of Fate for the Twilight Generation.