Broken City has if nothing else one of the most tempting titles to mock this year.  We have two Oscar winners, one Oscar nominee, and two Emmy winners all pretty much cashing a paycheck and hoping that Broken City will not be a featured film in any film festival or retrospective on their careers.  I didn't find it terrible.  I did find it confused, boring, and irrelevant.

Detective Billy Taggart (Mark Wahlberg) is involved in a shooting with racial overtones.  The public is asking for his blood, but Mayor Nicholas Hostetler (Russell Crowe) thinks he's a hero for having gunned down a serial rapist who had evaded the law.  While Taggart is found not guilty he is asked to give up the badge by his superior officer, Captain Fairbanks (Jeffrey Wright).

Seven years pass.  Taggart is now a petty private eye following cheating spouses to make ends meet.  His talents have not gone unnoticed, as none other than Hizzoner now hires him to follow the First Lady, Cathleen (Catherine Zeta-Jones).  She might be having an affair, and Hostetler hires Taggart to follow her and take pictures.

Let me digress for a moment that in any film, when a man is hired to follow a woman, chances are there is more to it than just a simple fling.

In any case, Taggart does as he's asked and gets incriminating shots, and the First Lady's rendezvous could not be any juicier.  It is Paul Andrews (Kyle Chandler, aka The Man Who Does Not Age), campaign manager for Hostetler's mayoral opponent Jack Valliant (Barry Pepper).  The pictures are handed over, but not before Cathleen tells Taggart not to trust her husband.

Well, we then find Andrews shot dead in front of his home.  Valliant is there, and under some enhanced interrogation techniques by Taggart and now-Commissioner Fairbanks, we learn that he was there to get information from Todd Lancaster (James Ransone), scion of a powerful real estate mogul and Hostetler supporter.  Todd could have provided evidence to bring Hostetler down and insure a Valliant victory (no pun intended) by being the inside source Andrews needed to expose the sale of a slum to developers.

As Taggart starts investigating what this secret evidence is he starts to find himself in danger from powerful outside forces, and Hostetler reveals why he hired Taggart.  He wanted to find out who his wife was tipping off with info, and he also holds a hereto unknown videotape of that seven-year-old crime which clearly shows Taggart shooting the suspect without provocation.

Taggart then makes the valiant (no pun intended) sacrifice of falling on his sword in exchange for bringing down Hostetler.  At what he thinks is his victory party, Commissioner Fairbanks, who has always had a chilly relationship with the Mayor, arrests him for murder, tells Hostetler that HE has been having an affair with the First Lady, and is led away.  Taggart is exposed, but who knows what the future holds.

In the entire review for Broken City, I did not need to mention anything about the subplot of Taggart's romantic relationship with Natalie Barrow (Natalie Martinez), the sister of the rape victim whose rapist Taggart shot down.  I also did not need to mention that Natalie is a struggling actress who made a film called Kiss of Life (I guess Kiss of Death was already taken), where she somehow failed to mention to this former alcoholic that she appears in an almost pornographic love scene with her co-star/director Ryan Balantine (Justin Chambers).

Come to think of it, Taggart's falling off the wagon is just as easily dropped from Brian Tucker's screenplay as well.  We see him drinking, fighting with Natalie, and after a bit of a bender neither his boozing or his now-ex are seen or heard from again.  Perhaps that in itself could be forgiven, but not so many other elements that ask us to suspend disbelief to where it becomes ludicrous.

And all that is just with the videotape...

In short, we are asked to believe so many unbelievable things and even some that are flat-out impossible for us to gauge (exactly how could we have figured that Fairbanks and Cathleen were lovers when it looked like they never even met?) that Broken City soon becomes almost laughable.

I can't give director Allen Hughes (going for his first solo film without his twin brother Albert) because in terms of performances, I don't think anyone took this seriously.  I don't care how many Oscar nominations Mark Wahlberg receives: nothing on this Earth will convince me that he can actually act.  His face remains as expressionless as ever, a permanent scowl and furrowed eyebrows to indicate any emotion. Zeta-Jones is simply too good to be doing films like these: here she is nothing more than the alluring woman who saunters through this conspiracy and has little do to.  Same goes for Martinez, who is there just to throw in a somewhat lurid sex scene that leaves one scratching their head (why WOULDN'T Natalie tell Taggart just how graphic it was or even think seeing her in such a scene wouldn't possibly bother him but instead wait until the premiere to let him see his fiancée take it in the ass).

Crowe I think played this part with the paycheck playing in his mind.  It doesn't matter how good he is (and he is a good actor), but Hostetler was one of those villains who appears to know he's a villain and behaves accordingly.  I at least never got the exact reason why Fairbanks had such hostility for Hostetler (and wasn't it such a wonderful coincidence that he became Commissioner) or as to why he would allow Taggart (someone he wasn't fond of either) to force information out of Valliant (who under Pepper, an actor I like, tried to make him an upstanding moral leader but who frankly came off as a liberal wimp). 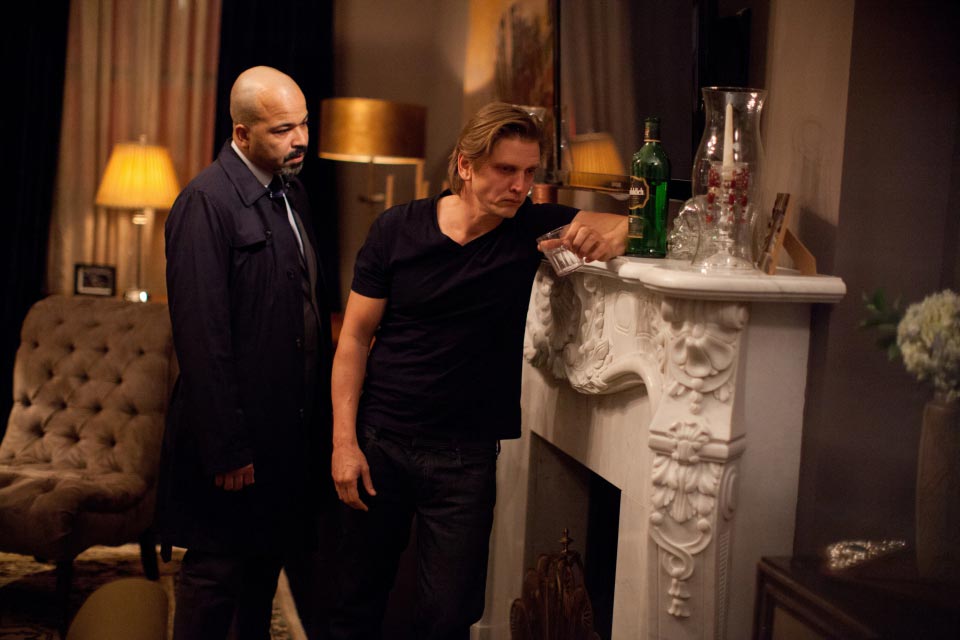 As a side note, I was perplexed by an element in Broken City in terms of the Andrews/Valliant relationship.   As I watched the film, there was at least for me a sense that Andrews and Valliant were 'more than friends'.  In the scene where a devastated Valliant is at Andrews' house (and said fact has to be kept secret from the public) there seemed to be suggestions that they were lovers (never seeing a Mrs. Valliant did not help matters).   Though it was never formally established that Andrews and Valliant were actually lovers (at one point when they are discussing strategy in a scene that is irrelevant to the plot, Andrews does somewhat angrily call Valliant 'sweetie' or 'sweetheart'), I got the suggestion that they were.  If that was the case (and again I cannot be certain given how murky Broken City was) it would make an Andrews/Cathleen liaison highly unlikely.

There is so much going on in Broken City, but so much of that goes wrong.   Whole plotlines that are irrelevant and dropped without any follow-through, some bad performances (some like Crowe and Zeta-Jones phoning it in, others like Wahlberg showing they are limited), and a rather uninteresting story (who really cares if New York wouldn't sweep such a liberal like Valliant--a name that already sounds laughable--into office over a vaguely-Republican Hostetler).

"I take pictures.  I don't get paid to think," Taggart at one point says.
About sums up Mark Walhberg's career at large...