How To Survive A Plague: A Review 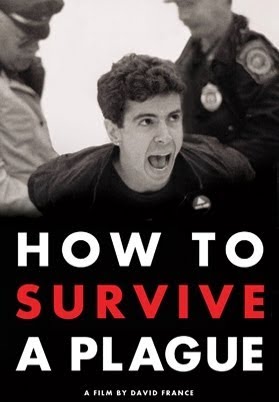 HOW TO SURVIVE A PLAGUE

I felt a bit like a throwback to another era after watching How to Survive A Plague.  I may be the last generation who knows people who have died of AIDS.  The generation that has followed me apparently has never heard of Acquired Immune Deficiency Syndrome, and if they have it apparently is something that happened 'in the past'.  As far as Millennials are concerned, safe sex means not getting pregnant.  For those of us who remember when celebrities feathered themselves with red ribbons (I remember being given red ribbons in high school...or was that for drug awareness), who was told that 'anyone can get AIDS', who remember people as varied as Rock Hudson, Ryan White, and Magic Johnson, How to Survive a Plague is not just a history lesson, it's a flashback.

Of course, for full disclosure I was also brought up to believe that ACT UP (The AIDS Coalition To Unleash Power) was an unhinged militant group of homosexuals blaming everyone but themselves for the AIDS epidemic, people who hated with the same fervor of those who were as homophobic as they were heterophobic.  As in all things, the truth is much more complicated.  How to Survive A Plague is the story of ACT UP, of how they began, fell apart, and came back just in time to see their long fight bear fruit.

It is Year Six from when the first HIV diagnosis was made.  In New York City, Mayor Ed Koch appears to be indifferent to the disease that affects primarily (though not exclusively) gay men.  The gay community, long shunted off and ignored (except on Election Day) and which has been decimated by AIDS, has decided they've been ignored long enough.  Some, like Peter Staley, a closeted investment banker, has decided that they are tired of being ignored and that this disease is not seen as a crisis.  With that, ACT UP is formed.  With their slogan of "ACT UP, Fight Back, Fight AIDS", they take to the streets and hospitals, determined to force the issue.

The AIDS epidemic is not getting either attention or funding, from either state or federal agencies.  ACT UP holds then-President Ronald Reagan and his two successors, Presidents George H.W. Bush and Bill Clinton, accountable for having their needs ignored, and for the slowness of treatments, medications reaching the market, and funding for research.  The gay community is forced to take matters into their own hands.   Sometimes it's in creating a black market for potential treatments.  Other times it's by taking militant steps against those who work against them.

If it means shouting and demonstrating within St. Patrick's Cathedral while Cardinal John O'Connor is conducting Mass so be it.  If it means putting a large condom over the home of their chief nemesis, the late Senator Jesse Helms, so be it (though to their credit, they do offer to pay for any damage their stunt might have cost.  While no actual structural damage to Helms' home was done, it is certain that the senior Senator from North Carolina was not amused).

As the AIDS epidemic continues, ACT UP soon starts splintering.  One group, TAG (the Treatment Action Group) soon started working within the system they had earlier denounced, and some within ACT UP saw them as an elite who had betrayed the cause.  Soon internal infighting began weakening the ACT UP organization to where one of its leading lights, playwright Larry Kramer, exploded a tirade at all of them.  Angrily he denounced the denouncers, calling them to remember that they were facing a plague, and if they did not stop their infighting all of them were as good as dead.

Eventually, to the shock of many of them, after years of furious work, the idea of a single AIDS drug was abandoned (despite this being the Holy Grail of ACT UP) and it was replaced by the 'cocktail' of treatments that has given many, including those who began ACT UP convinced they would die, a chance to outlive even those who had opposed them (such as Helms himself).

Some however, such as Robert Rafsky, a gay man who had fathered a child with his ex-wife, did not make it, but their fury at how so many had died while the government did little to nothing outlived them.

Perhaps this is my imagination, but many of the people who were at the center of the storm and who did literally live to tell the tale looked in the limited present-day interviews looked to me almost shell-shocked, stunned that despite having HIV, they were still alive when a few decades earlier their diagnosis meant almost certain and immediate death. Most of How to Survive a Plague is culled from old video tape, giving it not only a 'you are there' immediacy but also a sense of all the events being as if they were happening now.  In many ways, the video of the meetings and protests and even the funerals filled with rage were precursors to the present-day habit of recording every event in a person's life.  However, with How to Survive a Plague we see not just the protests and meetings (including when ACT UP was eating its own) but also brilliantly intercuts Rafsky's life.

As we are reminded via a counter of the number of AIDS death worldwide, we also get scenes of Rafsky's daughter's various birthdays, and as she grows up we wonder how long he will be around.  We end his story with his funeral, his daughter crying and perhaps not fully understanding the circumstances.

Even now, the rage that ACT UP tapped into to force the issue of AIDS to the public in their take no prisoners/not take 'no' for an answer still comes across.  What makes David France's film more effective is that he does not attempt to portray the members as saints or somehow victims.  They are just as able to be petty, spiteful, and vicious to opponents and each other as the opposition is to them.  The interviewees in the archival footage even tacitly recognize that perhaps they had gotten some of it wrong, that the road they pursued of a single treatment was a mistake and that millions of dollars and hours had basically been wasted (though I would argue it wasn't a total waste).

As a film, How to Survive a Plague is an engrossing document of a movement where a major health crisis spurred a group of disenfranchised people to rise up in righteous fury (perhaps sometimes too much fury, but I leave that up to the viewer).

Curiously, while the film obviously focused more on AIDS than gay rights, one thing that did not go noticed is how AIDS played a vital role in the expansion of gay rights.  The gay community would no longer be marginalized, especially since so many of them were dying and no one appeared to give a damn.  I think that without the AIDS epidemic, there would not have been an acceptance of gays in the military or same-sex marriage.  AIDS, at least from what I surmise, was the trigger that forced homosexuality out into the open and would not be shut in again.

Granted A.) this is just a theory and B.) I'm sure they would have not wanted something like AIDS to be the force that brought about this change, but there it is.

How to Survive a Plague is an excellent film, one that doesn't attempt to dress up the flaws of the individuals who do look back in wonder at how they managed not just to survive but to thrive.