Hardy Not Worth The Time...

Star Trek Nemesis was the final Star Trek film featuring the Next Generation crew, and with good reason.  Nemesis is bad, and despite everyone's best efforts, it can't rise above some of the weakest material the Enterprise has come across.

The Romulan Empire has a coup (which I understand is a common occurrence on the planet).  However, there is a twist: the new leader is a Reman, a native of Romulus' twin planet of Remus (no wonder there is a vague Romanesque style to the machinations of the Empire).  Admiral Janeway (Kate Mulgrew from the Star Trek: Voyager television series in a cameo) now asks Enterprise's Captain Jean-Luc Picard (Patrick Stewart) to go to Romulus and see if their new overtures of peace are true.  Of course, this will delay the honeymoon of newlyweds Commander Riker (Jonathan Frakes) and Counselor Troi (Marina Sirtis).  Things are complicated enough as it is with a discovery on Kolarus III: an android that is almost a double for Data (Brent Spiner), whom we discover was an earlier version called B-4 (how punny).

On Romulus, we find the shadowy leader, a Reman named Shinzon (Tom Hardy...yes, THAT Tom Hardy).  He gives Riker, Troi, Data, Worf (Michael Dorn), and Picard a shock: he is eerily similar to Picard in almost every way.  Shinzon makes it clear that they are connected, and we get the whole story: he is Picard's clone, created by the Romulans as part of a nefarious scheme to infiltrate the Federation by attempting to replace Picard with his doppelganger.  That plan, however, was abandoned when there was an earlier coup, and Shinzon was left to wither away on Remus.  If not for the courage and nobility of a Reman guard he would have perished.  Instead, this Reman became Shinzon's protector and for his loyalty he is now Shinzon's Viceroy (Ron Perlman).   In the ensuing years, Shinzon has managed to build a master ship, the Scimitar, from which he will launch his vengeance against both Romulan and Federation.

There is one major problem: the Scimitar has as its energy source thalaron radiation, which can kill quickly if released.  As Picard attempts to bring Shinzon to the Light Side of the Force...er, make him see the error of his ways, Shinzon will not hear of it.  In fact, he is determined to capture Picard, as he needs his genes to live since as part of his cloning process he was programmed to age quickly.  Therefore, he is running out of time.

As it so happens, so is Data.  Having transferred all his memories and 'emotions' to his brother B-4, he sees that B-4 is a danger.  He was placed there as bait, and now has put everyone unwittingly in danger.  As Shinzon begins his attack, Romulan and Federation join forces against a common enemy.  However, Shinzon, now either desperate, uncaring, or insane (we're not sure), decides to make it a suicide mission.  Picard and later Data go to the Scimitar to stop the thalaron radiation explosion Shinzon plans, with one making the ultimate sacrifice.

Perhaps this open-ended finale to Nemesis is what really irritated me on two fronts.  First, one of my Golden Rules of Filmmaking is: Never End Your Movie By Suggesting There Will Be A Sequel.  In a strictly technical sense, Nemesis didn't end by saying 'there will be more Next Generation films, but it left the door open, and in a particularly vile way.  I say vile because the subplot in John Logan's screenplay (based on a story by Logan, Rick Berman, and Brent Spiner...Data himself) appears to have been there for one reason: to rob the audience of the poignancy of the 'loss' we've witnessed.   If you are going to give a major character a noble end, don't cheat by having a literally ready-made replacement waiting in the wings.

Somehow, despite all their efforts, the 'twist' involving said character is almost telegraphed so brazenly anyone who thinks about where the story is headed is already five steps ahead, right down to how it will all come out.  More than anything, this 'non-death' is what I found most appalling about Nemesis...we are being asked to mourn the loss of a major and perhaps beloved character only to basically be told, 'No, we've got another version right here, so basically he never really died'.


SPOILER ALERT!  IF YOU DON'T WANT IT SKIP THE NEXT PARAGRAPH.
YOU'VE BEEN WARNED!

As a digression, let us compare the loss of Spock in The Wrath of Khan with the loss of Data in Nemesis.  In the former, it looked pretty definite, and we got to see this iconic character make a great sacrifice (and a chance for Leonard Nimoy to have a great death scene).  In Nemesis, we don't see him really die, and given that B-4 is there, implanted with all his memories, it is as if he really didn't die.  It is a cheat.  You could say that The Search for Spock is a cheat in that the character is basically revived, but the film made a case as to how it happened (the newly-created planet of Genesis brought EVERYTHING to life), but in Nemesis, it's basically an upload that brings about a new Data.  In short, where Spock's death was poignant, Data's death is empty of emotion.


There are other things in Nemesis that push the film down.  The film had moments of intended comedy that fell flat (Data SINGS!, but who would have thought Worf wouldn't like the android's rendition of Irving Berlin's Blue Skies...or that Klingons would even know who Irving Berlin was), and there was a lot left unexplained.  Exactly WHEN did the Romulans take Picard to make a clone?  Did this come before or after Picard was taken by the Borg on the television series (and did this cloning take place DURING the series...so was I suppose to have watched Next Generation to follow the plot)?  Poor Picard...always getting used by aliens.  You'd have thought by now other beings would have picked another Enterprise crew member (the super-slut Riker is a good candidate I would imagine).

Also, what exactly IS Janeway doing here?  I'm no expert on Star Trek timelines, but wasn't Voyager stranded 75 years from her original time?  Furthermore, while it is nice to see her pop in, I imagine something like this would appeal to Trekker/Trekkies only, and those of us with limited or no knowledge of the Star Trek mythos, we'd say, "Who's THAT?"

As much as Nemesis wanted to portray Shinzon as either Picard's double (and hammering this theme of duality excessively with both Picard/Shinzon and Data/B-4) our villain came off looking a bit like a camp and whiny kid.  I think Hardy looks imposing as Shinzon and did his best, but part of me felt he knew this was all a bit silly.  One thing that James Cagney, a master of the amoral gangster, always believed was that when playing a villain, one should realize that to a villain, he doesn't see himself as 'the bad guy'.  The great screen villains (a Hannibal Lecter, Norman Bates, Veda Pierce in Mildred Pierce, The Manchurian Candidate's Mrs. Iselin, or Cagney's Cody Jarrett in White Heat) never think of themselves as villains.  They see themselves as almost heroic, or at least above morality.  With Shinzon, you always believed he saw himself as evil, not wounded.  Ostensibly he was motivated by his mistreatment by the Romulans, but he seemed more concerned with having "Daddy" Picard love him than anything else.

As a side note, the erotic fixation Shinzon had on Counselor Troi was introduced (and given a bizarre moment when he enters her mind via Inzadi...not ask me to explain let alone understand what Inzadi actually is) but never followed through.  If Shinzon really wanted to make Troi his Reman Queen, he didn't seem to bother even trying to capture her.  Of course, this would reduce her to mere eye candy/plot device, which is more than can be said for Dr. Crusher's Gates McFadden.  Same can be said for LeVar Burton's Geordi LaForge...what exactly was the point of having him (apart from contractual obligations)?  I could even say that both Frakes' Riker and Dorn's Worf was similarly irrelevant.  Sad to see so many Next Generation characters appear so fleetingly and/or unnecessarily while Stewart and Spiner hog as much screentime as possible.

There were other things that bothered me.  Jerry Goldsmith, usually a reliable composer, appeared to have ripped off/paid homage to Stravinsky's Rite of Spring when Picard and Data escape the Scimitar.  Speaking of which, this escape was filmed in such a way that I felt I was watching a video game.  Data's literal plunge into space had me laughing more than marveling, another moment of humor (though I have to imagine it was unintended).   Jeffrey Kimball's cinematography went overboard at times (on the desert planet of Kolarus III, the sepia tones were bordering on parody, if not actually crossing said border).


Oh, Nemesis...you spoiled your chance to give the Next Generation a respectable send-off.  It isn't to say Nemesis was all terrible: it is nice to see Tom Hardy when he was young and thin, not the gigantic block of muscle he has morphed into.  He certainly looks imposing in black and he is a good actor (when directed well, which Stuart Baird did not do).  However, he was almost silly as a villain (and I never shook the sense that Hardy thought the same).  Given that Spiner came up with part of the story, I similarly never shook the sense this was his effort to make Data almost the co-star of Nemesis (logic be damned).  I'll give him credit: it takes chutzpah to have your substitute waiting in the wings to give you a character both new and old.

However, Star Trek Nemesis all but doomed any future hopes for another Next Generation-based film.  In fact, its spectacular failure doomed the franchise for almost a decade, and it was such a bad film that rather than attempt to bring back the Next Generation or any other Star Trek series (Voyager, Deep Space Nine, or Enterprise...would have loved to have heard Russell Watson treat us with Going Where My Heart Will Take Me one more time), it took an entire reboot where we had to basically start from scratch to bring the Enterprise out to the stars once more...

No Blue Skies for The Next Generation, alas. 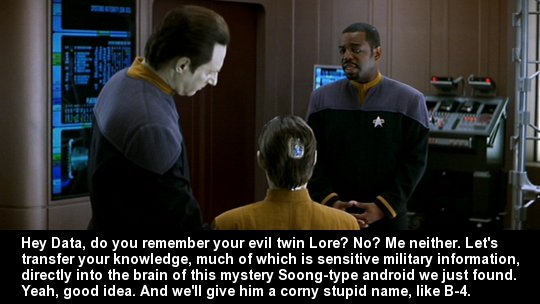