The Queen of Versailles: A Review (Review #535) 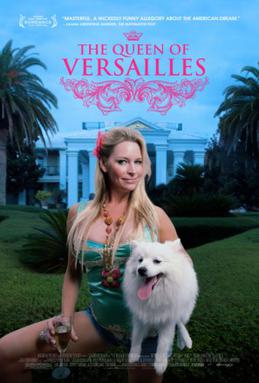 THE QUEEN OF VERSAILLES

In a certain sense, I feel a sense of sympathy for Jacqueline and David Seigel, the subjects of The Queen of Versailles.  Here they were, happily building their dream home (which if completed would have been the largest private home in the United States, one larger than either The White House or Graceland) and which would have been modeled on the Palace of Versailles.  However, the Seigels, part of that much-derided One Percent, found themselves strapped for cash once the 2008 economic crisis brought down the heady hopes and dreams of many a wealthy couple.  In turns shell-shocked, oblivious, and resilient, the Seigels are objects of both ridicule and endearment as they, once flying high, find that fortune (in all its forms) doth not smile on them anymore.

The Queen of Versailles started as a documentary about the building of said largest private home in the States.  The Seigels owned Westgate Resorts, a timeshare company with various branches across America.  Here, the Westgate Sales Staff eagerly (I'd argue almost cult-like) offer people great chances for a mini-vacation home or hotel room in Vegas or somewhere else, all for a small fee.  As far as 76-year-old David and his 43-year-old trophy wife figure, this is the best of times.  They believe that having a larger home is necessary.  Despite having a large mansion already (one stuffed with literally stuffed animals), it's just too small now.  Therefore, a 90,000 square foot house is required: one with a baseball field, parking lot, sushi bar, and children's wing.

A small digression: growing up, I too had a children's wing.  It consisted of one room.

In any case, the Seigels keep building their dream home and things are going well.  At least they were until four hours after they celebrate the gala opening of their acquisition of Planet Hollywood Resort (complete with a personal appearance by ex-Playboy Playmate Holly Madison, then appearing in the resort's Peep Show review...I saw it and while they might not be real, they were SPECTACULAR).   They were sued by the Planet Hollywood Towers builders for unpaid bills.  With the banks hurriedly pulling credit all over to save themselves from the imploding economy, Westgate is forced to lay of thousands of employees.

From here, The Queen of Versailles takes one odd, bizarre, but also endearing turn after another.  The Seigels are not heartless plutocrats and do not share the philosophy attributed to Marie Antoinette of "let them eat cake".  Far from it: we learn that both of them are from modest stock, having risen to success on hard work, shrewd business mergers, and a little good fortune.   They do have hearts (for example, Jackie lends her friend $5000 for her own mortgage) but they also don't appear able to accept reality.  Jackie still spends on lavish gifts and parties, while David, attempting to keep the business afloat, gets increasingly irascible as his large family continue to leave the lights on.

Eventually, even their beloved Versailles, the symbol of all they have worked for and felt was now theirs by their virtues, will have to be let go.

As I said, the Seigels are not horrible people.  They do care about their friends and employees, and they do know what it is like to have nothing.  The only problem as we see in Queen of Versailles is that they just don't remember what it is like to have nothing.  So used to having material comforts and an excess of them that when they meet up with what people who would shell out $9 go through they seem genuinely puzzled.

For me the most bizarre moment in Queen of Versailles is when Jackie goes back to her hometown to see old friends in similar circumstances (though at a less hefty price) and get her bearings up.  Having just arrived at the airport (on her private plane if memory serves correct) she heads to the Hertz Rent-A-Car kiosk to get a vehicle.  She tells the employee that she is on a budget, and then asks the befuddled and startled Hertz representative, "What's my driver's name?", clearly expecting an answer.

She is not joking.  Jackie is perfectly serious and is thrown a little when informed that she will have to drive herself.  For some reason, Hertz does not offer drivers with their vehicles.

It is in her total obliviousness to how people actually live,  as to how she is genuinely unaware that millions of people are in far worse shape than the Seigels (not many of the Westgate employees recently terminated I imagine would be able to afford the $10,000 Gucci feather pants she bought pre-Recession...and I should point out that two pairs of said pants is more than my annual salary) that makes Jackie less a figure of fun and more almost a figure of pity.  Her dreams of Versailles aren't motivated by arrogance or a need to show off or look down on everyone else.  She truly believes her family deserves a larger home to fit in more things.  She truly believes it would be nice to have a massive ballroom larger than some people's entire homes (say, for example, mine, which could easily fit within the foyer...along with both my front and backyards).

In short, it's as if the Seigels and their servants live in an alternate universe where spending thousands of dollars on one shopping spree that doesn't include such things as groceries is perfectly rational.  This cult-like groupthink extends to the Seigel's staff.  One of their nannies for example, lives in what was once the Seigel girls' dollhouse, and while it isn't the most comfortable fit she seems quite happy within it.  If memory serves correct the same nanny dons a Rudolph the Red-Nosed Reindeer costume to entertain the Seigels' guest for Christmas (and I don't think she gets paid what we would call overtime for these activities).  The nanny seems perfectly happy to be part of this strange universe where buying toys and continuing to build a massive house but not providing food and water to a pet lizard for lack of cash is considered rational.

Lauren Greenfield's film does not paint them as monsters nor as victims.  Instead, the Siegels appear as they are: wealthy people who rose from nothing and can't figure out how they got hit with almost losing it all.  The Seigels aren't living beyond their means so much as their means are beyond their living.  They clearly don't need all the material things they have (the stuffed pets are particularly grotesque) but they don't see that (except for Jackie's niece Jonquil, who unlike her aunt and uncle still remembers the sound of the train-whistle from the wrong side of the tracks).   This teen is the only one who when interviewed sees that perhaps the excess which the Siegels live their life even after it was shaken to the core is too much and unhealthy.  However, one doubts they would even listen to her should she point out it is more sensible to stop spending or even selling to keep costs down rather than to have a nanny put on a costume for a party they could have done without.

Somehow, seeing David fume about lights being left on as almost being the cause of massive bills is both relate able and almost sad.  Trust us, the lights are not why you're losing money...though Jackie should turn them off if they're not being used.

Even the people around them appear not so much dim but unable to accept things as they are.  One figure I was fascinated by was the real estate agent for Versailles, one Lorraine Barrett.  Part of my fascination was on how she clearly didn't know how to pronounce 'Versailles' (she kept calling it 'Versays', complete with the 's').  Part of it was also on how she believed that at a time when so many people are now forced to live with their parents, when college graduates can barely get hired for fast-food or call-center positions, when people truly are suffering, someone would buy a 90,000 square foot unfinished mansion.

As I said, David and Jackie Siegel are not evil or uncaring.  They at heart do think of others.  It's just that they either can't or won't accept that things will have to be different.  It is less schadenfreude and more 'sad fools'.

In many ways, The Queen of Versailles could be about an allegory about America itself: a great enterprise which spends its resources on frivolous matters, which is in turns ostentatious, vulgar, and perhaps a little insane, brought crashing down when the bills come due, only to turn around and continue living as it has, aware of something being wrong but having no idea as to how to fix it (apart from the obvious of reducing their costs and spending less until they are on more solid financial ground).  I couldn't help think about all those who bought time-shares when one would think that perhaps having a vacation home in Vegas where they could stay for one or two weeks a year might not be the best idea.

They too were like the Siegels, buying (literally) into the idea that a good life was somehow their right.  I wondered what happened to those people who no longer could afford the time-shares or even managed to justify such ventures.  Then again, they weren't the focus of the film.

The Queen of Versailles is not about mocking a wealthy family who now find themselves in dire straits.  Rather, it is a chronicle of a family that worked hard, got wealthy, then lost much but forgot they were no longer as wealthy as they were.  They are good people who have moved onto another world, but now that said world has crashed, they apparently can't let go of certain dreams.

In a bizarre and almost heartbreaking way, we are all the King and Queen of Versailles.