No Man's Land concludes this, the fourth season of Gotham.  On the plus side, I didn't hate it and it seems to set up a very strong albeit abbreviated Season Five.

On the other, some elements seem to border on the absurd.

It looks like Jeremiah Valeska (Cameron Monaghan) aka the (maybe) Joker is down for the count.  However, like all criminal masterminds, he has a few tricks up his sleeve.  It looks like he might have a few more bombs to wreak havoc.  This is already bad enough for Captain Jim Gordon (Ben McKenzie), but add to that the interference of Major Harlan (Malik Yoba), ordered by the Governor to take over things.

That means Gordon is arrested for insisting on following his instinct rather than Harlan's orders. Naturally, just before he's arrested he's taken hostage by The Riddler (Cory Michael Smith).  His plan is to kill Gordon so as to remove him from Dr. Leslie 'Lee' Thompkins' (Morena Baccarin) life.  Lee, however, cajoles Riddler into letting Gordon live.  In the ultimate battle for Lee's heart, she seems to lean Gordon, but no matter, she and Riddler manage to stab each other to the apparent death.

In all this Jeremiah seems to be under the control of someone else, and he manages to escape GCPD HQ, taking Bruce Wayne (David Mazouz) with him.  Bruce would rather stay with Selina (Camren Bicondova) as she fights for her life. However, Bruce is needed by Ra's al Ghul (Alexander Siddig) to become Gotham's 'dark knight'.

Meanwhile, our other criminals Barbara Kean (Erin Richards), Tabitha Galavan (Jessica Lucas) and Butch Gilzean (Drew Powell) find themselves not only in alliance with Oswald Cobblepot aka The Penguin (Robin Lord Taylor), but now Alfred (Sean Pertwee).  Agendas all around: Butch is mostly out of commission as he is being restored by Dr. Hugo Strange (B.D. Wong), but Barbara wants to kill Ra's, Jessica wants to kill Jeremiah for Selina, and Alfred wants to save Bruce.

It's a battle royale between all of them.  Ra's is convinced Bonkers Babs is no threat, as only Bruce can kill him.  She, however, has a trick up her sleeve: she thrusts the dagger into Ra's al Ghul while holding Bruce's hand, thus technically having Bruce kill him while not actually doing the killing.

No matter: the bombs have gone off, blowing up the bridges and forcing whoever is inside Gotham itself to remain there.

Wonder if there are any suburbs in Gotham.

Anyway, Bruce has a choice: either go with Selina and Alfred as they are ferried out in an ambulance or stay in Gotham and fight for the city.  Bruce, with regret, opts for the latter.

The city in total darkness and chaos soon starts getting carved up in territories by our Rogues Gallery: one for Pengy, one for Mr. Freeze (Nathan Darrow), one for Firefly (Michelle Veintimilla), one for Scarecrow (David W. Thompson), and one for the newly-dubbed Sirens Barbara & Tabitha.

The latter is a result of Penguin's actions.  Strange did restore Butch to life, but in the ultimate act of revenge, Penguin kills Butch in front of Tabitha as retribution for her killing his beloved mother. When Barbara learns what Penguin did to Tabitha, she becomes so enraged that she decides to kill the men who have pledged loyalty to her because they are men.

Gordon, his partner Harvey Bullock (Donal Logue) and a few other GCPD cops stay inside, determined to fight for the city.  To his surprise, Bruce is there too, and Gordon and Bruce look up at the spotlight the police have placed above Gotham, a sign of hope as the darkness invades. 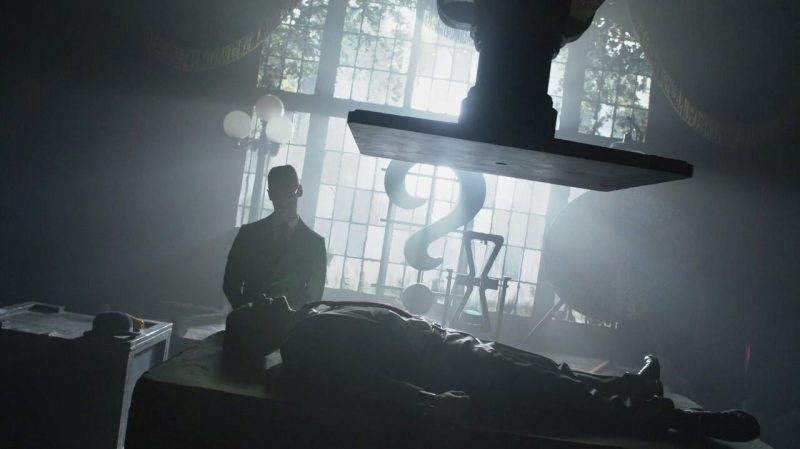 For good or ill, that's an awful lot to pack into one hour, and No Man's Land mostly held. However, that it has so much also is a bit of a detriment, given how at times things seemed to be spinning in circles in the past.

Among the moments that would cause groaning is one awful cliched scene when Gordon rushes to the bridge to save a little girl lost.

I don't expect Gotham to rewrite the book on having the hero do something heroic but this is so old hat it again borders on the absurd. It isn't that I want children to die. It's that we've seen that before.

I also wonder about Major Harlan.  His main role was to be a plot device to get Gordon out of the way, since apart from this and the end when he pretty much has to give in he adds nothing to things.  One wonders why not just have Riddler come in, grab Gordon in the chaos of when Jeremiah uses magic to spirit himself and Bruce out, and be done with it.

I also do not like the suggestion that Selina's injuries are permanent and that she may never walk again.  I don't want Catwoman to become Oracle. It seems a terrible disservice to both Selina Kyle and the future Commissioner Gordon's daughter to have the two melded into one. Yes, we don't know if that will be Selina's fate, but it seems a horrible one to inflict on her.

Then again, the level of violence on No Man's Land is sometimes overwhelming.  I can accept Ra's al Ghul disintegrating, but I don't want to see Scarecrow behead someone.

As a side note, we got hints of other villains in the closing montage, or at least of some very weird acts by crazed people.

Acting-wise, you had fine work from people like Mazouz, who has come to embody the darkness within Bruce Wayne. It's a bit hard to see him be the bon vivant playboy yet, but it is extremely possible to see how he will become The Dark Knight. 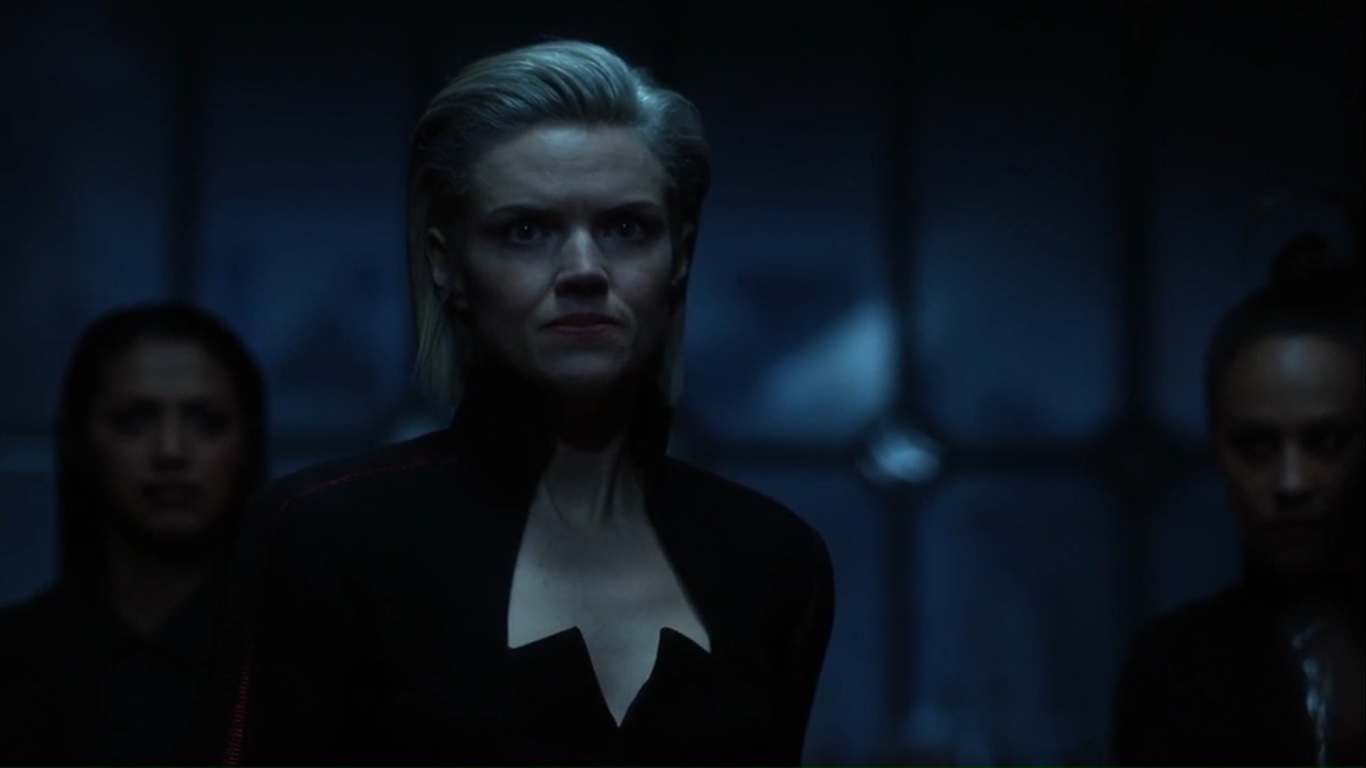 Another side note: given their conversation at the end, it is hard to imagine that Gordon does not know who Batman is, but that's getting ahead of ourselves.

We also had standout work from Taylor as Pengy, where we got to see apparent moments of humanity that sank when his chance to avenge poor Mama Kappelput came round.  Baccarin played Lee extremely well too, making one wonder whether she had gone over to the dark side or not.  Wong relished playing the evil Dr. Strange, and Richards was downright frightening as Bonkers Babs, down to her last moment of feminist fury.

The scene between Mazouz and Monaghan at the GCPD had a very strong Silence of the Lambs feel, which was enhanced by their performances.

It looks like I ended up liking No Man's Land more than I first thought. I think it was due to the battle between Ra's al Ghul/Maybe Joker and the unlikely team of The Sirens, The Penguin, The Butler and the Billionaire along with some good performances.  Not without some issues and a sometimes frantic feel, No Man's Land was not a bad way to end this season.

Next: The Complete Fourth Season