Persistence of Vision: A Review (Review #935) 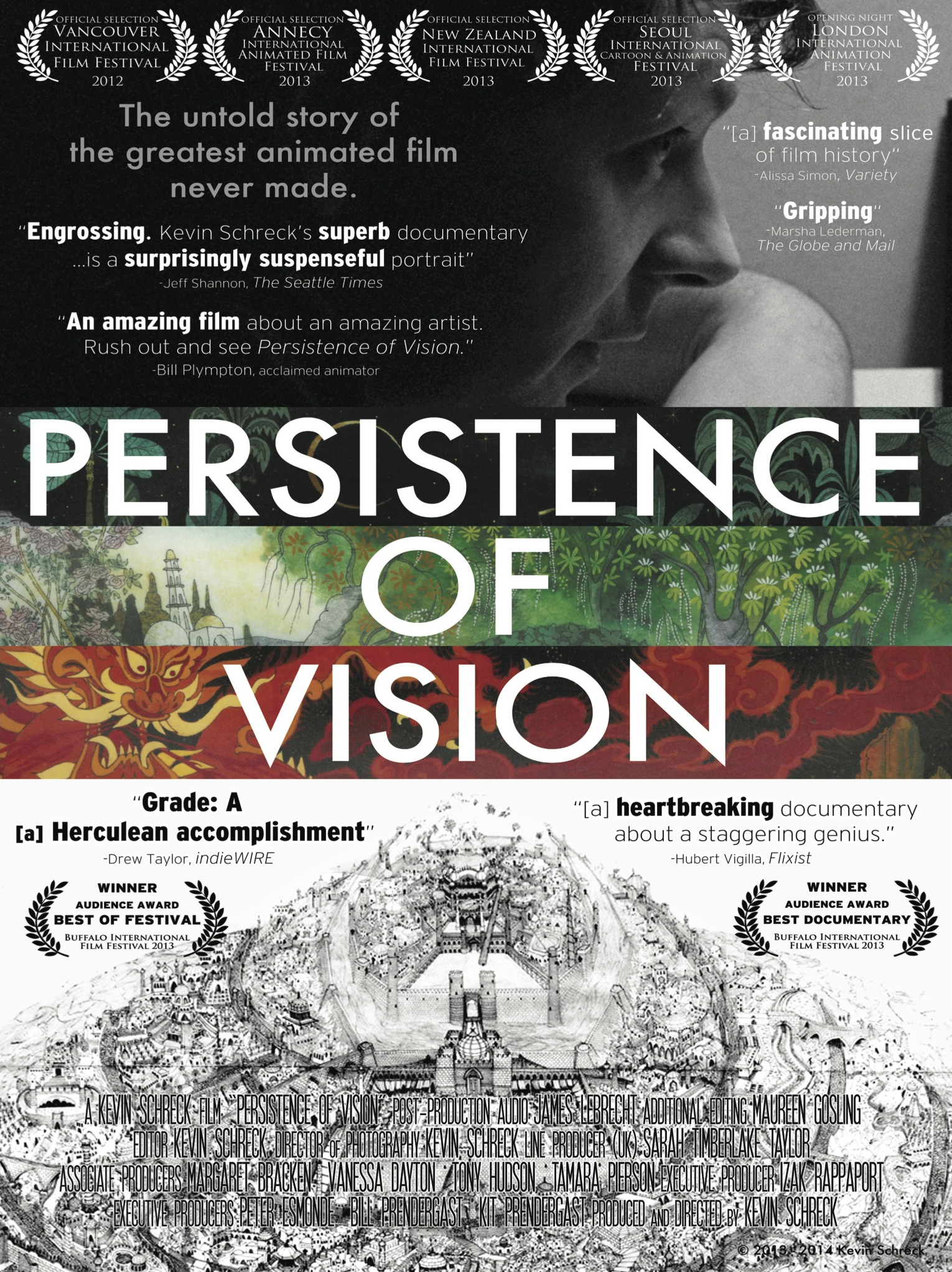 In the pantheon of Great Lost Films there is Greed, The Magnificent Ambersons and Touch of Evil, movies that were taken out of their creators' hands and given over to others who took the product into something other than what it was envisioned to be.  Add to that sad list The Thief and The Cobbler, the subject of the documentary Persistence of Vision.  This animated film, in the works for over thirty years, had a very tortured history and an even worse fate, one that ultimately makes one cry over the whole tragedy of it all.

In his 'quest for excellence', artist and animator Richard Williams became enchanted, or obsessed, with the Nasrudin stories of Persia and began to work to create an animated film based on them.  His difficulties were that he really never had a complete story but a series of vignettes and that due to fraud, he had the rights, and all accompanying work, essentially taken from him.

He was allowed to keep a character, a Thief.  Undeterred, he charged ahead again, this time planning a major work: The Cobbler, The Thief and the The Grand Vizier.  Already having won an Oscar for his animated version of A Christmas Carol and supplementing his studio with commercial work ranging from movie title scenes to television ads, Williams and his group pressed on and on and on.

The pace was slow and painstaking, perhaps too slow and painstaking.  People brought on board, such as master animator Ken Harris, died during its production, and he had been working alongside Williams for fourteen years.  The work on The Cobbler and The Thief took a lot out of those who worked on it: many eventually left for work at other studios, and one animator recounts he was not allowed to visit his wife in the hospital when she had meningitis.  The only way he could get around that was by going to see her on his lunch hour. Despite all the production woes with the film, the results more than make up for it.  Using no computer technology, which Williams was opposed to, some of the sequences in The Thief and The Cobbler are breathtaking in their ingenuity and visual splendor.  An unexpected boost comes his way, when none other than Steven Spielberg sees test footage from the film.  So impressed is he that he hires Williams and his crew to create the animation for Who Framed Roger Rabbit?.  With his second Oscar in tow, Williams now has the backing of Warner Brothers for $50 million: $25 to finance and $25 to promote, with the understanding that he had to have it finished and at budget.

Alas, Williams' passion project could not get that done: he continued in his crawl, lengthening scenes because of their beauty instead of story reasons, and that is considering he didn't have an actual story for many years.  In his long interim, Disney managed to beat him to the punch with the similarly-themed Aladdin, which bore more than passing similarities between their characters and those in The Thief and The Cobbler. It didn't help that many people who worked on Aladdin also had at various points worked on The Thief and The Cobbler before quitting or being let go.

As was the case with all artistic ventures that exceed logic, Williams failed on his promise to deliver the film on time and on budget.  With it 'almost complete' in 1992, the Completion Bond Company legally seized everything connected with The Cobbler and The Thief.

After over thirty years work, the film was released as Arabian Knight, an Aladdin knock-off that junked a lot of Williams' work, mixed some of the original work with animation made by others without Williams' input and which differed from The Thief and The Cobbler, and added voices and songs to the characters: two things that Williams was dead-set against (he opposed songs completely and had envisioned the title characters to be mute).

Williams, who did not participate in Persistence of Vision, is still working on a new secret project, and still is revered among artists and animators. 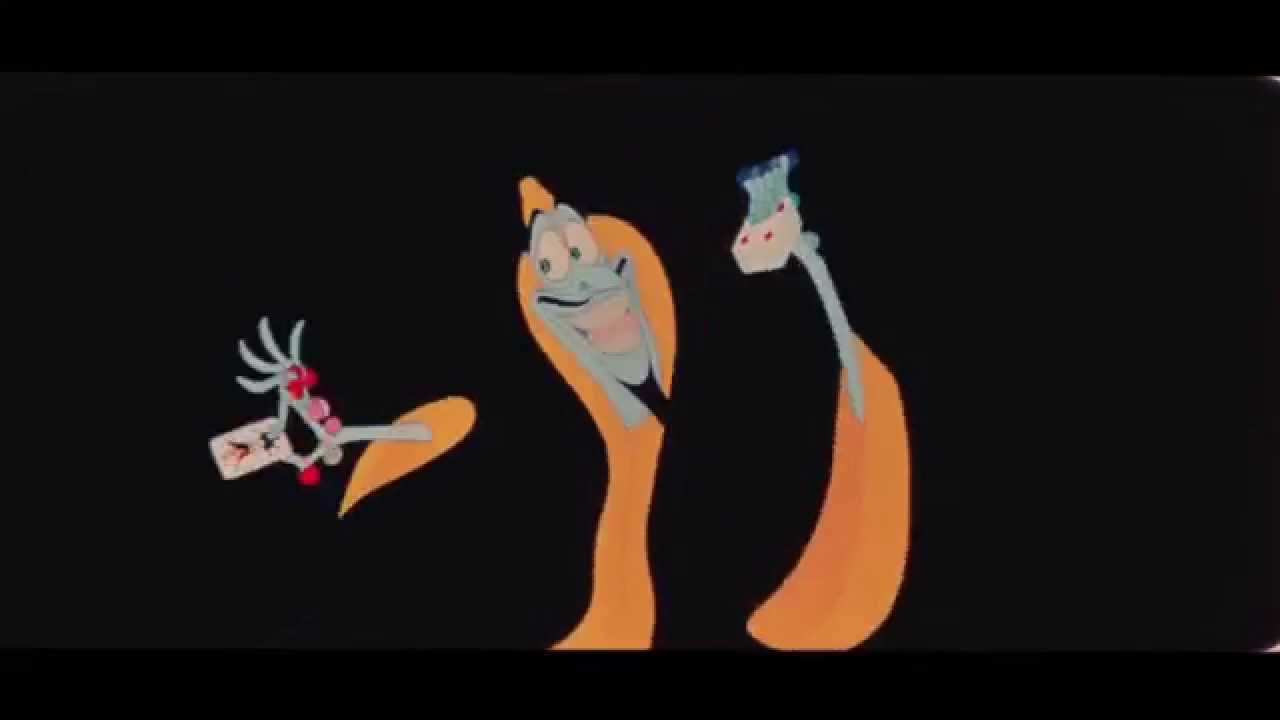 For those who see Persistence of Vision, it all just breaks your heart: both the ultimate collapse of what could have been a beautiful, almost revolutionary piece of art, and the destruction its failed creation wrought.  The work on The Cobbler and The Thief or The Thief and The Cobbler (it seemed that the title could shift) did affect people's private lives (Williams' marriage failed, other people almost literally died in its making, and years were spent on a total of a few minutes' worth of screentime, if they were lucky).

Some things that led to the ultimate fall of The Cobbler and The Thief were not Williams' fault: the shady business deals that took the original Nasrudin stories from him.  Other things were: extending scenes that did not need extending, the failure to have a solid, set script, the driving obsession to the point of other people's private lives (another animator, if memory serves correct, quit or was fired when he was denied the opportunity to be at the birth of his first child, the time needed on a never-ending production).

Director Kevin Schreck does not delve deeply into the blame Williams has for this debacle, but from my seeing of Persistence of Vision, he does bear a great deal of blame.  In his 'quest for perfection', he may have forgotten that 'the perfect is the enemy of the good', and that his work, though beautiful, was running too long in production, money, and patience.

One animator wryly noted that he had 95 minutes of an 80 minute film, but The Thief and The Cobbler kept growing and growing with no actual signs of stopping.

In a certain way, Persistence of Vision is highly sympathetic towards Williams' mad, tragic, doomed efforts to create something truly magnificent.  The scenes from the aborted Nasrudin, as well as Williams' version of The Thief and The Cobbler are spellbinding (particularly a chase between the title characters that was done with no computer enhancements).   Having seen all the work and love poured into the project, seeing just what extraordinary work had been created, and knowing what the original intention of Williams' was, once we see the trailer for the eventual end result, Arabian Knight, with its songs and voices and jumble of animation, it just makes you want to cry.

It being so forgettable that after decades of hard and painstaking work, to see it released on DVD as part of a cereal giveaway makes it all the more mocking and tragic.

However, part of me was almost sympathetic to the money men, those who put up the financial backing to finish this passion project.  It wasn't as if Williams wasn't aware that The Thief and The Cobbler had to finish at some point.  His decision to extend scenes in particular because they were beautiful in particular struck me as extremely poor.  If he had maybe hoped for an extended version of The Thief and The Cobbler, to go back and tweak it after its release, that would have been applauded; his decision to make it grow into something much grander shows that he either did not know or did not learn the hard lesson Erich von Stroheim was taught.

Greed, his silent masterpiece, was intended by the temperamental director to run a punishing nine hours long.  Forced to cut it down to a slightly more reasonable four hours, it was still too long.  Internal studio politics took Greed out of Stroheim's hands and reedited it to a much shorter two hours, but the film, despite its brilliance in its truncated form, was not the work Stroheim had envisioned.

Similarly, Orson Welles' follow-up to Citizen Kane, The Magnificent Ambersons, along with his last comeback at directing a studio-financed film, Touch of Evil, both met a similar fate.  Having decided they were too complex to be understood, the studios took the film and reedited them, down to re-shooting scenes not in the original version of the films.  The destruction of both Ambersons and Touch of Evil essentially left behind 'beautiful corpses', films that are still impressive but not what they could have been if their makers had been allowed to complete things their way. 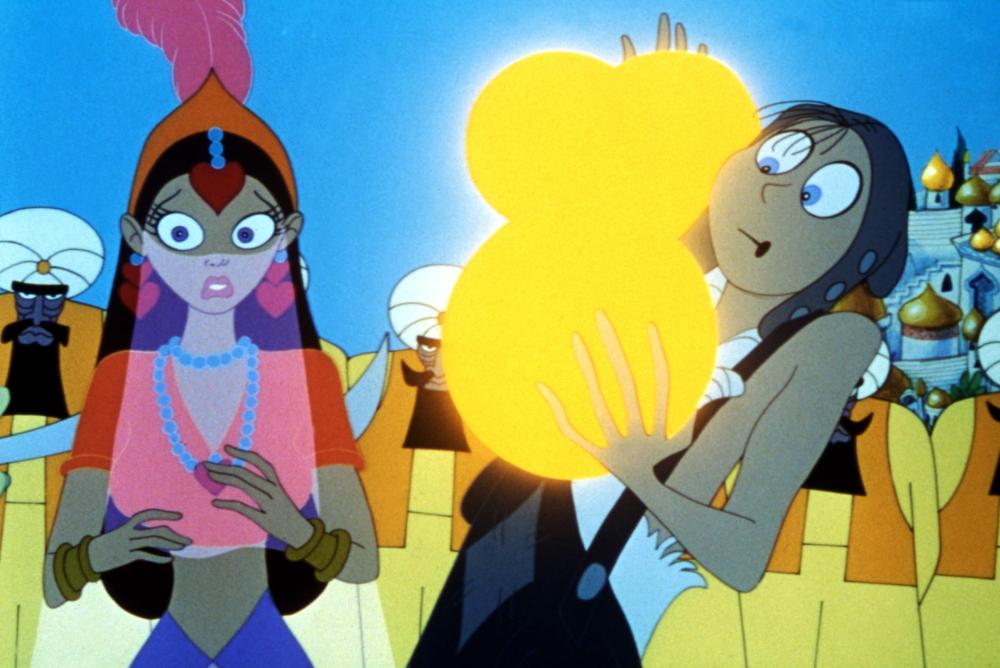 Such is the case with The Thief and The Cobbler, another film that could have been something extraordinary but that was destroyed by a terrible combination of financial considerations and artistic excess.  What is left is a terrible tragedy for all concerned.  It is highly unlikely that Williams' full, complete vision for The Thief and The Cobbler will ever be realized.  If memory serves correct, a great deal of material was essentially tossed and discarded.

Those who sold the bastardized Arabian Knight and another reworked version not or barely mentioned in Persistence of Vision (The Princess and The Cobbler) will never see profits from their handling of the material.

Audiences will get only tantalizing glimpses of something that could have been extraordinary, even revolutionary, and will have to settle for something less than the sum of its parts.

Persistence of Vision is a tragedy and both a chronicle and a warning to those who seek out to create their masterpiece: be careful that that vision does not blind you to the cold reality of money matters. Sometimes one can love something beautiful too much, and that love will ultimately destroy that which you hold so dear.