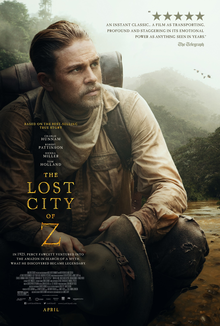 THE LOST CITY OF Z

Perhaps one of the reasons The Lost City of Z didn't do well in America was the fact that Americans pronounce the letter as "Zee" versus the rest of the English-speaking world which pronounces it as "Zed".  Therefore, the title makes it sound amusing to American ears, as if they were doing an adventure story set on Sesame Street.  The Lost City of Z, I figure, is a much better book than it is movie, for in its efforts to be epic, maybe even Oscar-bait, if failed to be entertaining.

Major Percy Fawcett (Charlie Humman) is a disgraced son searching to redeem his family name.  An opportunity pops up when the Royal Geographic Society asks him to survey deep in the jungles of Amazonia in an effort to settle the Brazil/Bolivia border and avoid war between the two.  Fawcett takes along Mr. Costin (Robert Pattinson) as his aide-de-camp (though they meet aboard the ship bearing them to South America).  It does mean leaving Mrs. Fawcett (Sienna Miller) back home in England, along with both their son Jack and the baby on the way.

As they enter the jungles and survive various dangers, Fawcett and Costin finds some evidence that there may have been a great civilization in the jungles hereto unknown.  Eventually returning as heroes, Fawcett insists on his case of a great civilization that is located in what he calls 'the City of Z (Zed)', though he is dismissed by many as looking for the mythical El Dorado of conquistador infamy.  While Mrs. Fawcett believes she should go on the second voyage, Major Fawcett insists she stay home.  He, Costin, and another explorer, Manley (Edward Ashley) go for a second expedition, this time bringing James Murray (Angus Macfadyen), who will help finance the journey.

The fat Murray is not built for the rigors of jungle trekking, and moreover is a coward, greedy, and pretty much a selfish scoundrel.  He slows them down, rejects the natives (though to be fair, they do appear to be offering them a touch of cannibalism) and takes food not meant for him.  While Manley and especially Costin would like to shoot him then and there, or at least leave him, Fawcett insists on giving him the last horse and some supplies to send him back.

Murray thanks them by pouring oil over their remaining foodstuff.

Once again in England (where Fawcett meets his daughter...seems Mrs. Fawcett gets pregnant every time he comes back), the men are surprised to see Murray not only alive and well but lying to cover up his horrors, insisting they apologize to him.  Fawcett refuses, apologizing to his men instead for having ignored them, and resigns from the RGS. Fortunately, World War I has begun, and he goes and serves.  He and Corbin survive but Fawcett's son Jack (Tom Holland) is bitter about the constant abandonments from his father: first his explorations, then the war.

It's now that Fawcett finds that many people, mostly Americans, have become fascinated with exploring the wilds of Amazonia, and look to Fawcett as an early influence.  He is persuaded to return one more time to find the Lost City of Z, and this time Jack insists on coming too.

Together, they go off into the jungle, funded by a consortium of American newspapers and John D. Rockefeller, Jr.  Corbin declines the offer to return.  Fawcett pere et fils go, find themselves caught in an inter-Indian war, and in the film are drugged and taken down the river.  Mrs. Fawcett retains hope that her husband and firstborn will return and are not dead, but they are never seen again.

The Lost City of Z has so much going for it, that it is a clear wonder to understand how it failed so miserably.  I put it as a combination of bad performance and especially bad directing by James Gray (who also wrote the screenplay).

It just seemed that every time the film had an opportunity to be good, Gray decided it needed to be 'important'.  I cannot say how close or far The Lost City of Z stayed or veered from the book, but the film seemed to go out of its way to be derivative of others, particularly those of Werner Herzog. 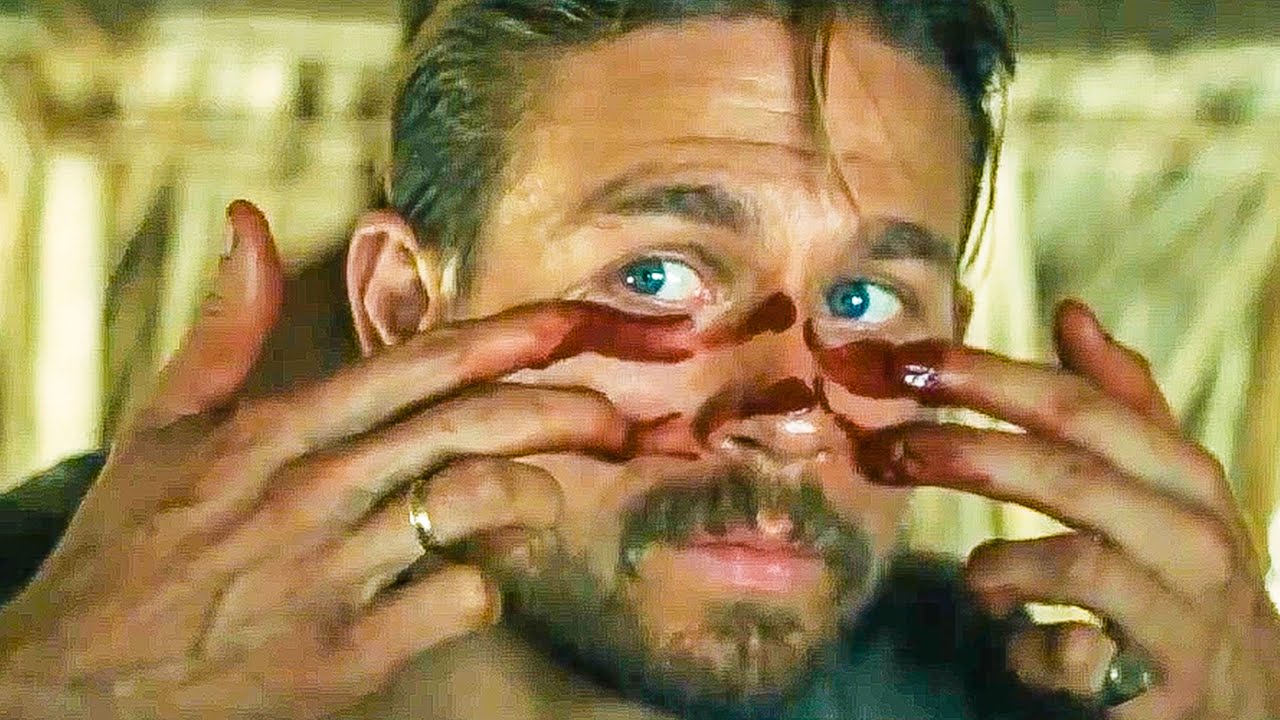 At one point Fawcett and Corbin come across an opera being performed in the middle of the Amazon rainforest.  If that isn't a straight-up rip off of Herzog's Fitzcarraldo (where the title character dreams of building an opera house in the jungle) then it's one of the wildest and most surprising coincidences in film history.

Still on this first journey, The Lost City of Z slips from one Herzog masterpiece (Fitzcarraldo) to another (Aguirre, The Wrath of God).   As the float down the river, the crew looks like it had wandered from or into Herzog's conquistadors epic down to certain images, such as the boat they encountered.

I'm genuinely surprised Humman didn't end up picking up a monkey and declaring himself King of Amazonia.

And it isn't as if Gray and The Lost City of Z didn't pay 'homage' to other, better films.  While the score is credited to Christopher Spelman, I found very little in it that was original.  The film quotes if not flat-out lifts from Stravinsky's The Rite of Spring and Debussy's La Mer among other works. Given that the former was written in 1913 and the latter in 1905 it is doubtful they would have been heard when Fawcett was exploring.

Perhaps La Mer could possibly be background music for the time, but Rite of Spring is simply not possible given we heard it or echoes of it when the film was in 1906.

It might have done The Lost City of Z a world of good if it did have Humman go Klaus Kinski bonkers, given how dry he was in the film. It would have shown that Fawcett had at least some emotion to him.

There are many things I dislike in film, and among them is when people confuse hushed tones with serious drama.  Again and again everyone in The Lost City of Z appears to whisper their dialogue, as if they are making a film inside a library.  All that whispering, all that quiet, even when they are supposed to be shouting or raging or be filled with anger, is indicative to me that the film thought of itself as a serious, somber, sober drama instead of a potentially good action/adventure film.

If it didn't want to go that route, that's fine.  An exploration into the conflicted, obsessed world of Percy Fawcett would have been equally compelling.  It's unfortunate then that Gray had Charlie Humman show virtually no emotion throughout.

Humman with this and King Arthur: Legend of the Sword is not making a case that he is a good actor.  He's making a case instead that he is a bad actor (though again to be fair, I have never seen Sons of Anarchy).  Humman never shows us what drove Percy Fawcett, what kind of driving obsession he had for either his family or finding the Lost City of Z.   He never seemed to have any emotion, any passion, any genuine anger.  Only once did I see Humman/Fawcett express any real emotion: when he confronts the Royal Geographic Society about his believes in a pre-Colombian civilization.

Apart from that, every time someone might have shown some emotion: when dealing with his wife/son's sense of abandonment, when Murray was showing his arrogance, when he faces danger all around, Humman seems so terribly detached from everything.  It's astounding how remote and distant he is in the film.  There's no sense of passion, emotion, anything really.

Robert Pattinson still hasn't made a case that he is an actor, but with his appearance here he makes a great case for casting him as Torgo in any Manos: The Hands of Fate related film or remake.   Macfayden, a generally good actor, never makes Murray either the villain that he is or the man who might be inspired to join Fawcett on his second voyage. It makes one wonder why he was there at all.

Holland isn't in the film long enough to make us question whether he's a bad actor or a good actor with lousy directing, but he too is forced into this 'hushed, quiet' manner of speaking that should drive people crazy.  Miller was there long enough to show she needs better material to showcase her skills, which she does have.

There's a certain dryness in The Lost City of Z, for what should be tense or exciting isn't.  I think the film thinks that being slow and quite and still it will be somber and serious, but ends up being boring.  By having everything be so serious, even moments that lend themselves to be amusing or at least light fail.

Bad performances with bad directing lead to an awful film and a wasted opportunity.  The elements are there.  They are just lost.