Ashes and Diamonds: A Review 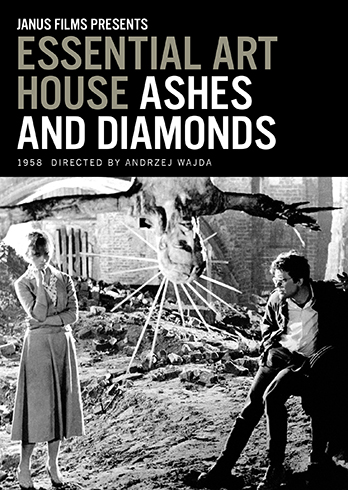 Ashes and Diamonds is a haunting film, one filled with overtly visual splendors that don't take away from its simple yet deep story.

On the last official day of World War II, Polish underground/Home Front fighters Maciek (Zbigniew Cybulski) and Andrzej (Adam Palikowski) attempt to assassinate Communist Commissar Szczuka (Waclaw Zastrzezynski).  They accidentally kill two people who happened to be at the wrong place at the wrong time.  Ordered to try again, they bide their time at the hotel where he will stay.

To celebrate the imminent surrender of the Nazi regime, a party is thrown by the mayor for the various Communist Party officials, including Szczuka who will attend.  The Mayor knows it's good to curry favors with the new masters of Poland, even if his assistant Drunowski (Bogulim Kobiela) is both a double agent for the Home Guard and gets drunk, thus making a fool out of himself at the grand celebration.

As Maciek awaits his chance, he becomes besotted with Krystina (Ewa Krzyzewska), the barmaid at the hotel where all these stories collide.  The Poles are too busy celebrating the fall of the monstrous Nazis to care about the lives of three little people, but they would see that all are headed towards a tragic ending.

Maciek and Krystina sleep together and soon wander through the remains of Warsaw, where our troubled hero talks of 'ashes and diamonds', the hope for a future away from all these killings, and a chance to live a happy life with Krystina.  The Commissar for his part worries about his son, whom we learn later on has become part of the anti-Communist Home Front and is being held by the Reds.  Maciek thinks of leaving the mission and going with Krystina, but Andrzej tells him if he doesn't do it, someone else will.  He will also be a deserter and a traitor should he put his own personal pleasures ahead of the greater good.  Maciek reluctantly agrees to kill the Commissar.

The Commissar pays little heed to the drunken revelries below, too worried about his son.  Early in the morning, before sunrise, he leaves to go see his son.  Maciek follows him and completes his sad and lonely mission.  Once done though, almost mocking fireworks go off behind them, and now Maciek's fate is sealed.  With the dawn of 'liberation' under Communist rule, Maciek attempts to make the prearranged train.  Krystina, for her part, is left behind, to suffer the indignity of having to dance to Chopin's Polonaise in A Opus 40 Number 1 or Military Polonaise with drunk revelers who go through the motions but care little to do so, played by the house band who butchers the music.  Attempting to flee, Maciek attracts the attention of the military, who give chase.  He tries to escape but is shot, and he dies in a trash heap, a wild animal in death throes. 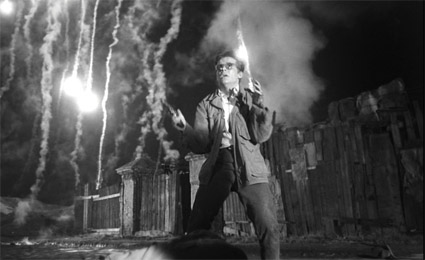 One would think that the symbolism in Andrzej Wajda's film would be overwhelming, but in truth it all blends so beautifully that it lends Ashes and Diamonds a sublime beauty and covertly says things that could not be overtly said given that it was made under Communist oversight, even if by Communist standards Poland was one of the freer states.

The visual that I found most haunting is when our lovers are wandering through a bombed-out church, the Crucifix dangling precariously upside down while His Crown of Thorns forms almost a web to ensnare our lovers while Christ has His back to them, and perhaps to all Poland as they exchange one dictatorship for another.

Right from the beginning, when one of the innocent men accidentally killed is murdered in front of an altar of a small church, Wajda is saying, I think, that God remains silent as evil is done right before Him (or in front of the Virgin Mary, sign of spiritual and physical purity).  Wajda has a heartbreaking moment where the fall of Poland is all but complete: the merry celebrants stumble and move mechanically as the music of its most famous composer is played badly.  Perhaps Wajda is saying that so long as Poland is truly not free, its history, its culture, will have to continue this dance of deception, going through the motions. That shot of Maciek cradling his victim while fireworks go off behind him, is such a rich moment in terms of visual cinema: both men will not be free even as the nation they fought to free is celebrating.  The Commissar will never see his son, and this youth holding his body will never see his father or be one himself.  The mission has been accomplished, but what of it?  Neither side has gained anything from it, except misery.

Watching this scene in Ashes and Diamonds reminded me of a similar scene from Brokeback Mountain.  I cannot remember the context of the celebration: I think it had to do with Heath Ledger's character Ennis having beaten down bikers who questioned his manhood.  He beat them, but while he has a celebration of victory going on behind him, he too has not 'won' because he still lives a lie.  I don't know if Ang Lee thought of Ashes and Diamonds when he filmed this scene, but it would be an extraordinary coincidence if he hadn't.

Much has been written and said about Cybulski's turn as Maciek, with many comparing him to James Dean.  I agree: not only does he look like Dean with his jacket and pompadour, but in terms of manner, Cybulski's character is emotionally tortured, angry yet with a soft core.  His struggle between love and duty, regret and courage, is magnetic and magnificent.  His early death at 39 further links him to the fascinating and complex American counterpart.

Ashes and Diamonds is a masterwork, one that uses images to speak things that could not be openly said.  With a powerful performance by Cybulski and masterful direction by Wadja, along with Jerzy Wójcik's cinematography, it's a haunting film of the personal cost of freedom, personal and political.