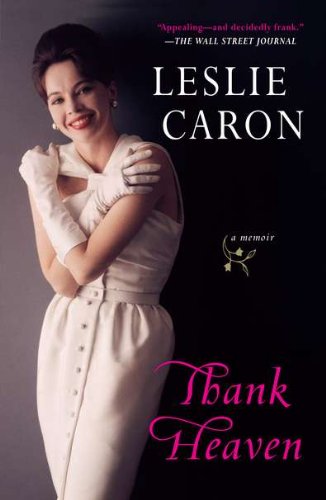 For Today's Journeys in Classic Film entry in the Summer Under the Stars Blogathon, I've decided not to review a film from today's star, Leslie Caron, but instead her memoir, Thank Heaven (the title inspired by a song from her film, Gigi).  Thanks to Kristen Lopez for allowing me to participate.

I am a permanent loss to understand why An American in Paris is held as this brilliant masterwork.  I found it, apart from the elaborate and brilliant final musical number, almost obscene.

To me, it struck me as an ode to stalking. It was almost a mix of American Gigolo and Lolita: a man pursuing an engaged girl almost old enough to be his daughter despite her constant rejections while also being essentially a 'kept man' by an older woman under the guise of being his 'patroness of the arts'.   Gene Kelly was 39 years old when he made An American in Paris, while his gamine costar/discovery, Leslie Caron, was a mere 20. Yet despite the fact she was engaged to another man, he kept pursuing her despite her 'no means no' declarations.

Still, people do seem to love it, and love Gigi as well.  In that one, we see that charming musical numbers can paper over the fact that our very young title character is being trained to be a man's mistress.  More shades of Lolita wrapped up in great songs.  Such deep philosophical thoughts aren't expressed in Thank Heaven, Caron's memoir.  Rather, Caron looks back on her life and career, one that had great highs, great lows, great self-doubts, and a surprising salvation from an unlikely source.

Caron, the daughter of a French chemist and an American dancer, grew up in a very charmed, almost Belle Epoque world of manners and Basque summer homes, a world of wealth, refinement, and love from her grandparents.  Her parents were not terrible, but there was a certain distance, especially from her mother.

Then came The War, which upended everything in Caron's life.  Gone were the lavish homes and warm summers, the nice clothes and abundance.  In came the cold, the deprivations of all sorts of material: food, clothes, running water.  It wasn't just the shortages that were a burden.  It was the Occupation itself, one that affected even how people behaved towards each other. 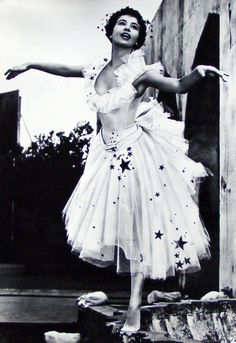 It was not the best of times, and even children's pranks took on an accidentally sinister air (Leslie and her brother Aimery would sometimes crank call strangers and in German accents say they were 'the Gestapo', which would terrify the listener until they realized it was children).  Neither Leslie or her brother realized at the time just how dangerous these crank calls were and she deeply regrets her antics.

At long last, the war ends, and Caron shocks her family by announcing she wishes to become a professional ballet dancer, Caron unaware that to her grandparent's generation, a 'ballet dancer' would by default be a wealthy man's mistress.  "Do you want your daughter to become a whore?" her beloved but horrified Papy asked Caron's mother.  Nevertheless, she persisted. She also showed great skill and enthusiasm for dance.

To her great surprise, she received a phone call from Hollywood, bringing her to MGM.  Gene Kelly had seen her a year earlier in a ballet, La Rencontre, and had gone backstage to meet her.  She, however, had already left home, unaware the American actor/dancer had sought her out.  Rushing off to America, land of her mother's birth, Caron and her mother begin the journey into cinema history.

Caron never fully thought of herself as an actual actress, constantly struggling to be one.  She also found herself in a curious position: not American enough for parts other than the foreign ingenue, and yet never accepted into French cinema, where with the exception of her friends Jean Renoir and Francois Truffaut, she was considered an American product.

Still, Caron kept working as best she could, including on another musical to win Best Picture, Gigi.  By this time Caron had found herself on her second marriage to Peter Hall, who was working furiously to build his eventually great reputation for his stage directing (he was later knighted for his work).  Hall, however, did not want an actress for a wife, and certainly not one who could join him for Shakespearean work.  He wanted a wife for a wife, and Caron struggled with and against that.  The push-and-pull culminated in an affair with Warren Beatty, which ended her marriage.

Finding new outlets for herself, she began to write and opened up an auberge (the French equivalent of a country inn) while still working in film or television, with her career reaching a high point when she won an Emmy for her guest role in Law & Order: Special Victims Unit (SVU) in 2007. 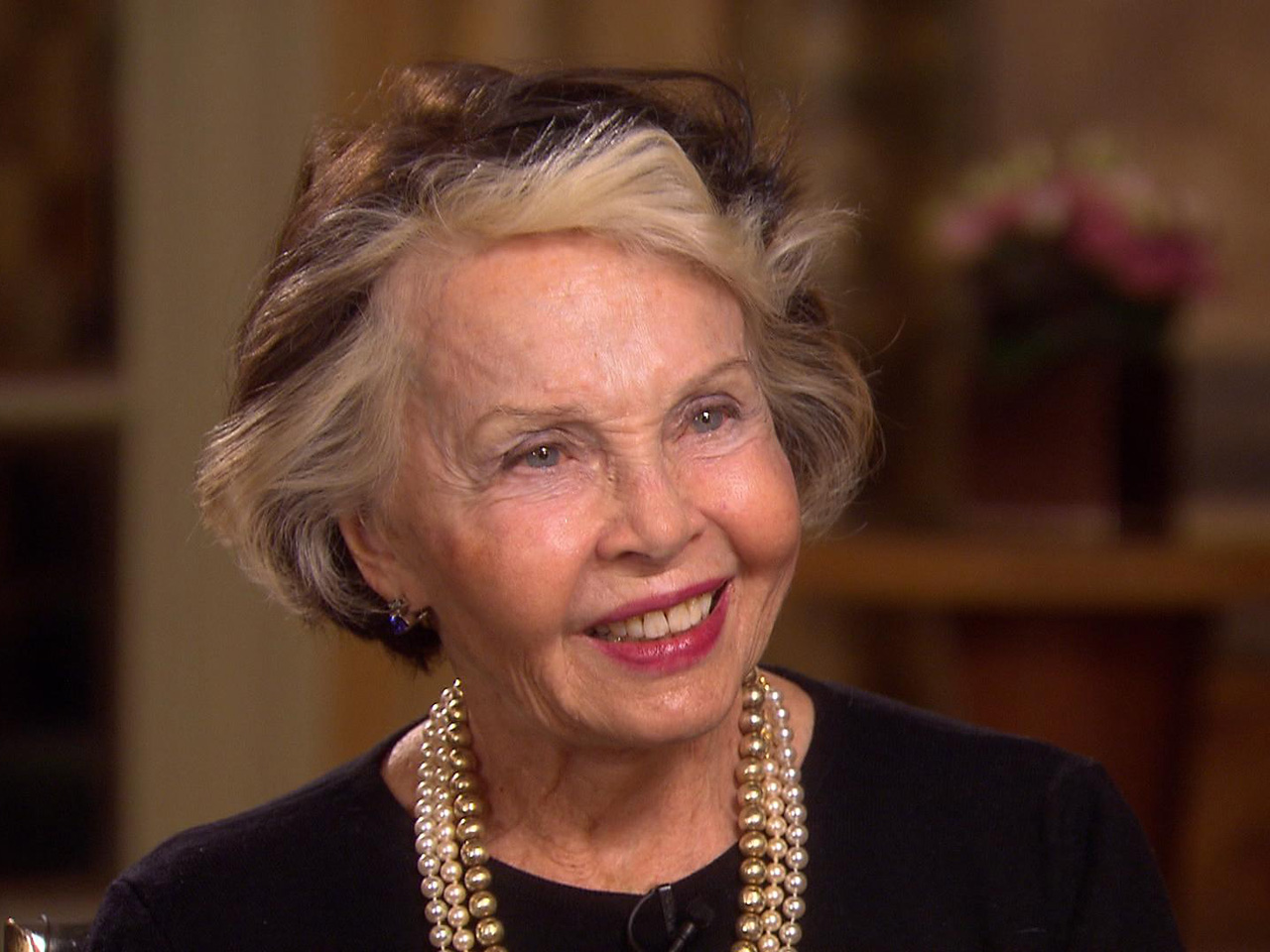 Caron does not spare herself from examination on the less than positive aspects of her life.  She is open about some of the bad films she was in or that didn't quite work how she would have liked.  For example, she thought the subject of drugs in The Subterraneans could have been for a good film, but she found working on it difficult due to her costars joining forces against her; one of them, Janice Rule, was married to the screenwriter and felt she should have been the lead.  The other, George Peppard, offered Caron a tryst essentially to 'get into character', which she turned down.  He was not amused.

"I thought then, and still do now, that he was a wooden actor," Caron writes, still displeased by it all.  Caron also expresses dislike for two generations of the Douglas acting family, stating that Kirk Douglas was more interested in his tennis game than being a judge at the Cannes Film Festival, and that she didn't like Michael any more than she did his father when Michael and Joel Douglas produced Courage Mountain, a version of Heidi.  "Rivals in cynicism", she says of the Brothers Douglas.

She goes on to state that when she objected to technical inaccuracies in Courage Mountain (such as having a map of Europe dating from 1960 when the film was set in World War I), they were curtly dismissed with "It doesn't matter, they won't know the difference!"  More infuriating was that Douglas essentially got the film on the cheap: the contracts with the cast and crew claiming Courage Mountain would be a television film when he secretly planned to release it as a feature film.

As well as detailing the people she knew and met, those she loved and those she disliked, Thank Heaven also gives us quite curious insight into what might have been.  Warren Beatty, for example, is portrayed as highly talented but almost desperate for approval (particularly from his sister, Shirley MacLaine), always playing at being a star but not liking it.  So besotted was Beatty with Caron, that at one point he made the bizarre suggestion that she play Bonnie to his Clyde.  Soon after, Beatty came to his senses and realized the part required an actual American.

Thank Heaven gives us more than just the high and low points of Caron's career or her views of the famous she knows.  Caron has a bright, light style, particularly when discussing the many travails she endured when opening her auberge, things that might make for a good comedy under the right hands.  She also expresses cold self-awareness, ruminating on struggles with depression and alcohol, and the troubles with her mother, who committed suicide.

After reading Thank Heaven, I find that Leslie Caron is worthy of a reevaluation in terms of her career.  It goes beyond Gigi or An American in Paris or even Fanny and The L-Shaped Room.  It would be interesting to see the depths of her acting ability, to see whether her long-held view that she was more dancer than actress is accurate.

It is surprising that the War got only one chapter, but as she often states, Thank Heaven is her memories of how she remembers things, not a strict recitation of facts and figures (which may explain why she remembers Le Divorce much more fondly and thinks more highly of it than the general public).  It makes an interesting and quick read for a woman almost 90.  I cannot say I'm a Leslie Caron fan, but after Thank Heaven, I am a Leslie Caron respecter.

And who knows, perhaps I will be converted, though for the life of me I don't remember her at all in Chocolat.  Could I have fallen asleep when she was on screen?

At one point, Leslie Caron jokes that when she was younger, she thought a good title for a memoir would be how many scripts sent her described the character she was offered to play: She's Not Beautiful, But...  While I have not seen all of Caron's films, even the lousy ones, and was not taken by some of the ones she was in, I reject the notion that she was not beautiful.