Abbott and Costello Meet the Invisible Man: A Review 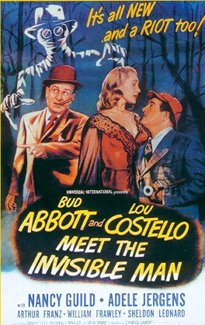 I start out by saying I have never found Abbott and Costello funny. The Marx Brothers, I found funny.  Laurel & Hardy, I found funny. The various versions of The Three Stooges, I find funny.  Abbott and Costello, with the exception of their Who's On First routine, I never found funny.  Costello, the eternal man-boy, was always crying "HEY BUDDY!  BUDDY!", usually in terror, while Abbott just pretty much took whatever abuse his dimwitted buddy threw at him when he wasn't doing the actual abusing himself.

Recent detective school graduates Bud Alexander (Abbott) and Lou Francis (Costello) find themselves with their first case: that of Tommy Nelson (Arthur Franz), a boxer accused of murdering his manager.  Tommy's on the lam, and Bud and Lou find themselves with him through the strangest and most illogical of circumstances.  Tommy takes our thoroughly unwitting heroes to the home of his girlfriend Helen (Nancy Guild) and her father, scientist Philip (Gavin Muir).  Dr. Gray has been working on an invisibility formula earlier used by John Griffin, who was driven mad by it.

Lou can't make it clear to Bud that the guy they went with to the house IS Tommy Nelson, but once Bud 'figures it out for himself', he's eager to get the reward money.  The police arrive, but they literally don't see Tommy.  He's injected himself with the invisibility formula and disappears in front of a disbelieving and shocked Lou.

After Bud twice tries to pull a fast one and get Tommy locked up, Tommy gets them to help him solve the murder.  The real murderers are gangsters who are angry that Tommy didn't throw a fight.  Morgan (Sheldon Leonard), the main gangster, still wants Tommy found, dead or alive.

Our heroes now decide to do undercover work by having Lou go into the ring as a boxing mastermind and Bud is his manager.  The reason 'Lou the Looper' is so fast is simple: Tommy is the one doing the actual boxing, but since no one can see him, everyone credits Lou.

The night before the big fight, a femme fatale named Boots Marsden (Adele Jergens) attempts to seduce our man-child Lou the Looper, but as much as he'd like to get seduced, either Bud or Tommy are there to prevent it.  Further complicating things is Tommy's excessive drinking, which neither Lou or Bud appear able and/or willing to stop.

Morgan leans on Bud to get Lou the Looper to take a dive in the fifth, and he's more than willing, but Tommy yet again thwarts Bud's latest get-rich-quick scheme.  Into the ring poor Lou goes, causing all sorts of mayhem, down to accidentally knocking Tommy out in a pique of hubris.  To his surprise and Bud's dismay, Lou wins the fight.

Bud is especially distressed because now he's going to be the one iced, but fortunately, the main detective in charge, Roberts (William Frawley), gets there in time to save them.  In the fracas however, Tommy is shot and injured.  His name cleared, he's rushed to the hospital where Lou gives him a blood transfusion that brings him back to visibility.  Unfortunately, Lou becomes temporarily invisible himself, causing some mischief with the pretty nurses.  That invisibility doesn't last long, and Lou finds himself desperately trying to cover up his slowly visible nudity while also trying to figure out how his legs got backwards. What surprised me about Abbott and Costello Meet the Invisible Man is that Abbott can be just as moronic as Costello.  As he prattles on about the Tommy Nelson case, he is thoroughly and completely incapable of figuring out that THE Tommy Nelson just happened to wander into his and Lou's office.

It's pretty clear from the onset that Lou is the bigger moron: he has a hard time walking towards the stage at the graduation, proceeds to fall off the small stage when the graduates sit, then is told by Bud that Lou managed to graduate because Bud paid the school off.  I guess a lot of the comedy comes from this roly-poly figure, easily frightened, could possibly pass himself off as a boxer.  His idiocy knows no bounds, as he manages to drive the police psychiatrist crazy, down to accidentally hypnotizing him and everyone else who wanders into the psychiatrist's office without meaning to.

It's also pretty clear that Abbott and Costello were in on the joke, for I noticed a lot of winking at the camera if not downright mugging to us, especially by Costello.  The film is full of sight gags and moments where it's clear that these two are playing up to the camera.  Perhaps that self-awareness is a reason I don't like Abbott and Costello.  It isn't as if the Marx Brothers couldn't on occasion do that kind of shtick, but Bud and Lou seem to build their whole careers on it.

They also didn't have the Marx Brothers' witticisms to go along with the lunacy and idiocy. It's not as if Abbott and Costello Meet the Invisible Man isn't without some merits.  A routine where Costello, dumb as he is, keeps managing to take money away from his more cantankerous straight man is amusing, and Costello has a surprising ability for some physical shtick in the boxing match.  When Lou shoots someone with a water pistol, he says, "I'm a little squirt," and I confess to chuckling at this.

However, a lot of Abbott and Costello Meet the Invisible Man seems either rushed or a drag.  The subplot with our temptress doesn't add much and Boots Marsden doesn't have much to do.  Same goes for the second-rate love story between Guild and Franz, both stuck in poorly-written roles with little do to as well.  They're all just plot devices to set up another Bud and Lou routine.

For the most part, however, I still don't get their appeal of Abbott and Costello.  Some people don't get what makes the Marx Brothers funny, and it's a cliche that women don't find The Three Stooges funny and wonder why men do.

For me, the mystery of the straight man Abbott, who is always trying to pull a fast one, and his little buddy Costello, the dimwitted boob who is easily scared, are similarly mystifying to me.

I probably will given Abbott and Costello one more chance should the moment arrive.  I know many in the audience were in stitches, and there were good moments, particularly near the end when Bud and Lou are trying to fight off Morgan and doing a right-mess of it.

Costello tries to handle a gun while still wearing his boxing gloves, and even after managing to get them off still is too stupid for his own good.  When Bud tells Lou to 'let (Morgan) have it', he meekly gives Morgan the gun and 'lets him have it'.

I still don't find Abbott and Costello funny.  It's really the audience reaction that makes me given even the slightest positive rating I can.  I truly hope that Abbott and Costello Meet the Invisible Man is on the lower end of their comedic prowess.  If it's near the top, then I'll be the man who will be invisible whenever their movies are show.